After months of hype, the NFL season is finally here. No more endless speculation, no more pontifications; I can officially say that yes, I am ready for some football. For Redskins fans, it’s all about RG3. How will the knee, the most talked about knee in modern sports, hold up? We don’t have to ask anymore. We’ll be able to see for ourselves how the knee is when he trots out onto FedEx Field–the same field on which he tore his ACL and LCL a little over 8 months ago–to lead the offense against the Philadelphia Eagles tonight on Monday Night Football.

And really, with the saturation of all things Redskins in Richmond this summer, I, a lifelong Redskins fan, am sick of talking, writing, and thinking about them. At this point, there is nothing left to say. The team is set, the fans are pumped, and we all can rejoice because, finally, the time for waiting is over. The season has officially begun! 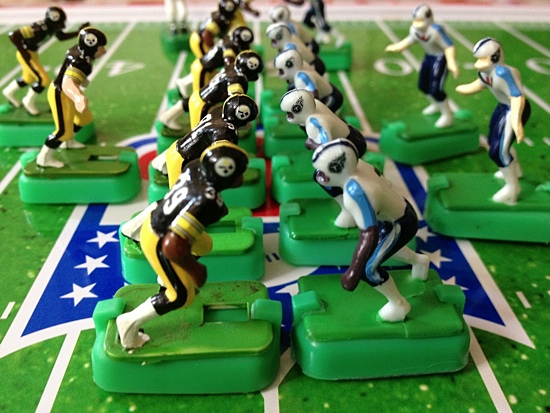 Opening day sleep fest with The Titans beating The Steelers at home 16-9.

The Steelers-Titans game put me to sleep for a good 30 minutes. Pittsburgh mustered a mere 195 of offensive and scored their only touchdown late in the 4th quarter (before that, their only points came when Titans return man Darius Reynaud inexplicably kneeled for a safety on the opening kickoff). To add injury to insult, they lost Pro Bowl center Maurkice Pouncey and Linebacker Larry Foote for the year. If yesterday’s folly of failure is any indication of how their season is going to go, it’s going to be a very long and painful year for Steelers Nation. All the teams in the AFC North lost on opening weekend, but the Steelers anemic performance was by far the worst. Titans Quarterback Jack Locker completed just 11-of-20 passes for 125 yards with no touchdowns. They ran for 112 yards on 42 carries. Add that up: 227 yards of offense was all it took to beat the Steelers.

I hope the local NFL affiliates don’t continue to inflict Steelers games on us if they continue to play this bad. Even when the Steelers are good, they are boring to watch, so if they’re going to suck this year, broadcast something else where teams actually score points. Just the thought of watching Ben Roethlisberger being perennially abused (he was sacked a league-high five times yesterday) in low scoring soccer matches makes me sleepy.

The Jacksonville Jaguars didn’t score any offensive points yesterday. I think they play so poorly because of that putrid new uniform they have to wear. Like their performance on the field, looking at them is like walking in on someone taking a shit. Everyone just wishes it didn’t happen.

I don’t like fellow Floridians the Miami Dolphins’ new look either. While they were mildly impressive ensuring that the Cleveland Browns would lose their ninth straight opener, I winced every time I saw highlights of them. It’s not as bad as the Jaguars’ excrescence, but still; the postal-stamping of classic logos and uniforms in the NFL that started with the Patriots’ transformation has yet to produce an enduring image that was once the league’s trademark. This year’s change to the Dolphins’ uniform is the first since a minor tweaking in 1996 and only the fifth in the team’s 48-year history. If, like the Patriots, the team’s fortunes improve with their new look, that means everybody will start doing it and no iconic logo or look will be safe.

For that reason alone, I can’t root for the Dolphins.

Even though they lost, new quarterbacks Terrelle Pryor of the Raiders and EJ Manuel of the Bills looked impressive in their first games. Both lost hard-fought battles (the Raiders to the Colts 17-21 and the Bills to the Patriots 21-23), but they kept their teams in the game until the bitter end. Their play gives both long-suffering franchises momentary hope for the future.

While it’s easy for some people to hate Jets coach Rex Ryan, it’s hard not to like Jets rookie quarterback Geno Smith. Chicken littled in the media, Smith helped led the team to an improbable victory over the Tampa Bay Buccaneers. He went 24-for-38 for 256 yards with a TD and a pick. Not the greatest numbers in the world, but coupled with a momentary lack of reason by the Buccaneers (Nick Folk kicked a 48-yard field goal with 2 seconds remaining after Buccaneer linebacker Lavonte David’s personal foul on Smith), he managed to lead his team to victory. For one week at least, Smith, Ryan and the Jets organization can laugh at all their critics.

Even though they beat the lowly (and garishly garmented) Jaguars, new head coach Andy Reid led the Chiefs to their most lopsided season-opening victory in 50 years (The Chief’s 59-7 throttling of the Denver Broncos in 1963). Alex Smith, jettisoned from the 49ers to the Chiefs in the off season, has a lot to prove and he has a coach that has a long history of getting the most out of his quarterbacks. Smith threw for two touchdowns and managed the game like Reid demands. Again, it is only one game against a weak opponent, but I think good things are starting to happen in Kansas City. 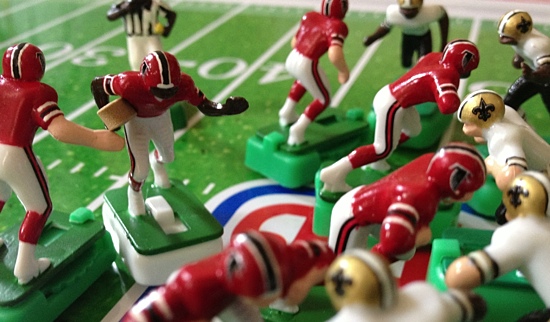 Sean Payton, back at the realm in New Orleans, is going to be trouble for everyone else. In one of the best games of the day, his tenacity (coupled with Drew Brees’s 357 passing yards and two touchdowns) led the team to a thrilling victory over the Falcons.

The Patriots are the same old Patriots. No matter what happens on the field, at the end of the game, they are usually the team that scored the most points. Barring injury to Brady, it’s a trend I don’t see ending any time soon. 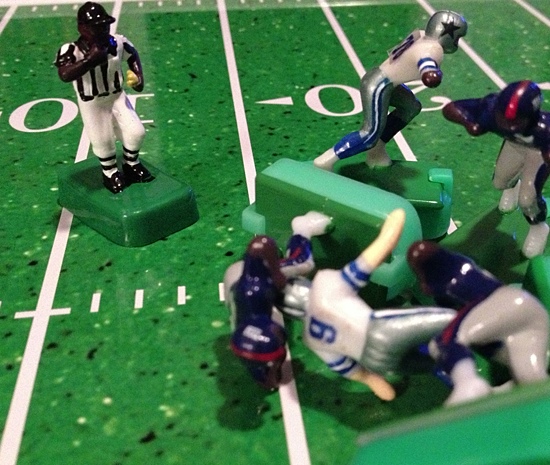 Tony Romo getting sacked by a pair of New York Giants defensive linemen late in the second quarter.

How the New York Giants can give up the ball 6 times and still be in the game (as they were last night against The Cowboys) is beyond me, but it is systematic of their recent tradition of violent contradiction. One play they look great, the next they’re giving the ball up and playing stupid. It’s no wonder why well-documented perfectionist head coach Tom Coughlin always looks like he is about to lose his mind. If they can ever figure out who they are with consistently, they’ll be dangerous. Until then, they’ll be the number one reason for Coughlin’s bleeding-ulcer good looks. 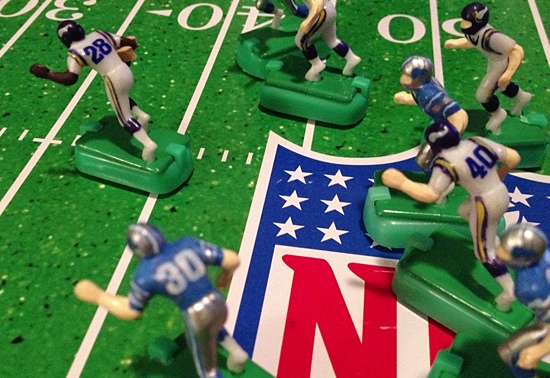 Vikings running back Adrian Peterson’s 78-yard touchdown run on the first play from scrimmage against the Detroit Lions.

The big winners of the day were the San Francisco 49ers in their triumph over the Green Bay Packers. Their principle rivals, the Seattle Seahawks, looked merely human against the Carolina Panthers, and the Niners’ looked like a well-oiled machine. Reggie Bush had a field day in his Detroit Lions debut racking up 191 yards of offense in a 34-24 victory over the Vikings. Cincinnati Bengels reciever A.J. Green shined in a loss to Chicago collecting nine catches for 162 yards and two TDs. Rams tight end Jared Cook had seven catches for 141 yards and two touchdowns. He would have had three if it weren’t for a great defensive play by Arizona Cardinals rookie safety Tyrann Mathieu that caused a fumble on the goal line in the second quarter of their 27-24 home victory. 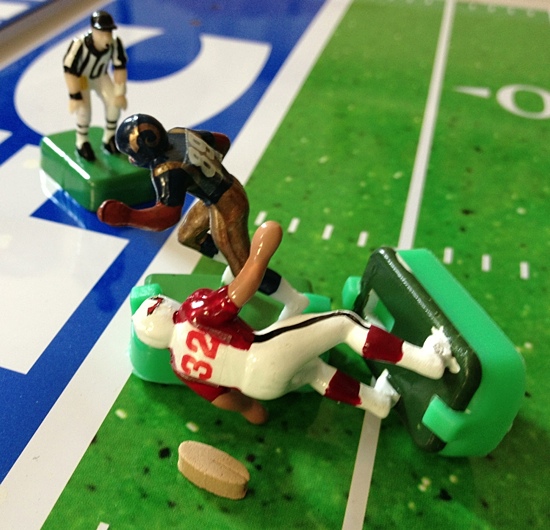 Oh, and Peyton Manning’s 7 touchdown performance against The Baltimore Ravens on Thursday night wasn’t too shabby either. 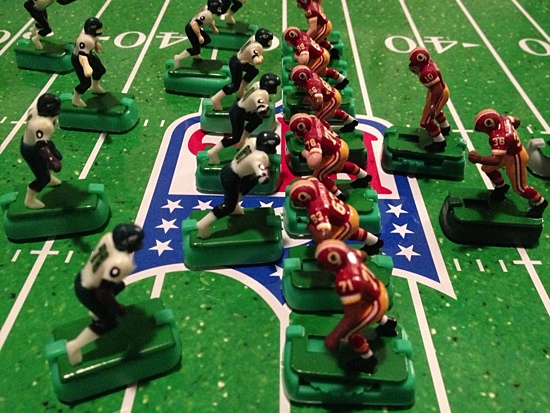