If the Mayor gets his way, Shockoe is going to get a massive facelift. Mayor Dwight Jones stood on what will be home plate of the new Shockoe Bottom baseball stadium, effectively ending debate about where the new home would be for the Richmond Flying Squirrels.

“We have made the decision and we move forward from this place,” Jones said to hundreds of onlookers, including scores of protestors. That decision shores up not only where the new stadium will be located, but its influence on Shockoe Bottom and the proposed Slavery & Freedom Heritage Site as part of the Mayor’s Revitalize RVA plan.

Jones said that both the Boulevard (current location of The Diamond) and Shockoe Bottom were analyzed to decide which site would yield the best economic impact for the city. “Shockoe is the right location,” Jones said.

The new stadium will rest below ground level and will feature 7,200 seats, a full 360-degree concourse, and over 5,000 parking spaces after erecting a new 1,700-space parking deck.1 “This will be the best ballpark in minor league baseball,” Jones said. The stadium will cost an estimated $80 million and is expected to open by the start of the 2016 season.

In addition, the Mayor said Kroger will build a 60,000-square foot grocery store in the vicinity of the stadium, alleviating what many consider to be a food desert in the area. Hyatt will also construct a nearby 200-room hotel. An apartment building will rise just beyond the future stadium’s right field. All told, 750 new apartments will be built: 200 connected to the ballpark, the remaining 550 immediately across Broad Street. These pieces will be built simultaneously with stadium construction.

Jones said the new stadium and supplemental development will bring $10 million in revenue each year, versus that of the projected $6 million annually on the Boulevard. Overall, the net new tax revenue will be $187 million (only $91 million was projected for the Boulevard), revenue that, Jones said, is “crucial to making the ballpark pay for itself.”

He said that 400 permanent jobs will be created, in addition to 1,000 construction jobs, which Jones touted as a way to help fight the city’s 26 percent poverty rate. Jones said that Shockoe has a “far better return on our investment” versus that of the Boulevard.

Flying Squirrels Vice President and COO Todd “Parney” Parnell attended the event along with the organization’s 27 full-time employees2 to voice support for the Shockoe stadium plan.

“The time to discuss a [new stadium] location is over,” Parnell said, a public declaration on behalf of the Squirrel’s organization in favor of moving baseball to Shockoe Bottom.

“We love Richmond,” he said on behalf of the organization. “We know that Richmond will continue to love us here in the Bottom.”

While baseball will not remain on the Boulevard for much longer, the Mayor indicated that it will not be abandoned. He mentioned no firm plans for the multi-acre site, but said many “conversations” will take place concerning how the current site of The Diamond will be used for future development.

The mayor and additional speakers at today’s event were often interrupted by scores of protestors lambasting the proposal for what they perceived as desecrating historical sites, including Lumpkin’s Jail.3 From the 1830s to the end of the Civil War, countless African-Americans were confined and tortured in the surrounding area before being auctioned off. Mayor Jones affirmed that that history will not be overlooked. “This is a story that should not be buried,” the Mayor said. 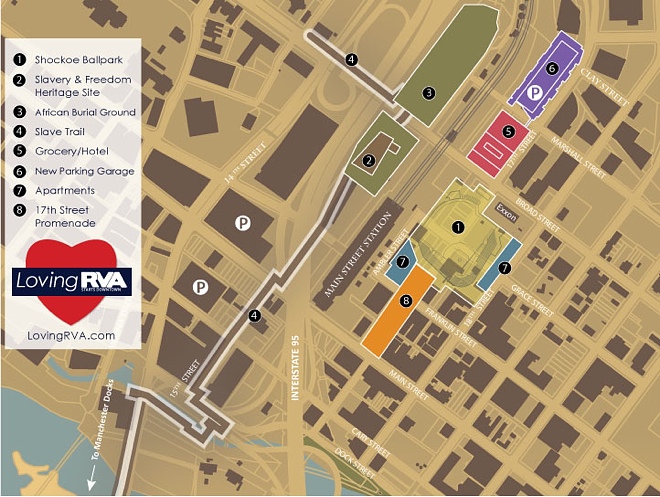 Funds generated by the baseball stadium and ancillary development will help fund the construction of an interactive Slavery & Freedom Heritage Site4 designed to bring tourists and visitors to the historic site. “We want everybody to know what happened in Richmond a long time ago,” Jones said.

The Mayor grew impassioned when describing how Robert Lumpkin’s ex-slave wife ultimately led to the construction of what would become Virginia Union University, the mayor’s alma mater.

Virginia Delegate Delores McQuinn (D-70th District), who has chaired the City Council-created Richmond Slave Trail Commission for the past decade, spoke in favor of the Shockoe redevelopment plan featuring an interactive Heritage site.

“This is the right plan for Richmond and it seriously talks about telling the American story the right way,” McQuinn said. “I am excited about it.”

The Mayor didn’t announce specific plans on what would constitute the future Heritage site, but affirmed he is open to public consideration about it. “I am committed to that ongoing dialogue,” he said.

Additional meetings and public outreach related to the new Shockoe baseball stadium and development, Slave & Freedom Heritage site, and development on the Boulevard should be announced in coming days and weeks.

There are 38 reader comments. Read them.