Two college rivals will square-off this spring as they honor the memory of a beloved baseball coach.

VCU and ODU’s men’s baseball teams will face-off in the inaugural Key Dog Classic on April 23rd to honor the memory of former VCU baseball coach Paul “Key Dog” Keyes (see below) and raise money for his family.

“It’s a privilege to be able to team up with Old Dominion University…to honor Coach Keyes and bring awareness to such a terrible disease,” said VCU Head Coach Shawn Stiffler.

Before serving as head coach for the Rams for 18 years, Keyes was a four-year letterwinner and standout player for the Monarchs from 1981 – 1984.

“Paul had major impacts on both universities, as a coach and an educator at VCU, and as a student-athlete at Old Dominion, and to be able to play in his hometown of Hampton is very exciting,” Stiffler said.

Former VCU assistant and current head coach for the Monarchs, Chris Finwood, said, “Paul was a great friend of mine and a mentor and I hope we can carry his legacy on through this game.”

Tickets for the game at the Peninsula Pilots’ War Memorial Stadium in Hampton, VA are $5 (students from both universities receive free admission with valid ID). Fans can also purchase a ticket package that includes a button with each school’s logo for $10 (the added $5 will be donated to the Keyes family).

Both the Rams and Monarchs will wear special jerseys that will be auctioned off after the game. In addition, players will shave their heads following the game as part of St. Baldrick’s Foundation’s “Basebald” initiative that helps fund childhood cancer research.

Tickets will be available online or by calling the Peninsula Pilot’s box office at 757.245.2222.

Last Saturday, longtime VCU head baseball coach Paul Keyes succumbed to stage IV melanoma, and many are honoring Keyes and his legacy in an extraordinary way.

“He was extremely instrumental in everyone’s lives,” said Scott Day, VCU’s Director of Athletic Communications. “Obviously, we’re all really sad.” Keyes was diagnosed with cancer in April this year.

Keyes coached VCU’s baseball team for 18 seasons, accumulating 603 career victories, the most by a Rams coach. He led his teams to eight NCAA Tournament appearances, five CAA championships, and was a four-time CAA Coach of the Year. Coach Shawn Stiffler has been named Interim Head Coach of the team. Stiffler was unable to be reached as he is currently assisting the Keyes’ family.

Reflecting on Coach Keyes, Scott Day said the baseball coach “came here in 1995 and built the team into a perennial contender.” The two met when Day arrived at VCU in October 2006 as an assistant director. “We became closer and closer over the years,” said Day about the coach, who was often referred to as “Keydog.”

Day said, Keyes, a father of three who “loved talking about his family,” “taught me so much about being a father.” He said the coach insisted that Day and others made “sure to take time to be a dad” despite the irregular schedule kept by many in VCU’s athletic department. “He challenged most to constantly become a better person.” Many of those endeared to Keyes have recently taken to social media to honor the coach.

According to Day, several days ago, Coach Stiffler posted a photo of himself with an open palm. He tagged the photo #hi5 for #PK5 to commemorate the fallen coach (Keyes’s jersey was No. 5). VCU baseball players soon followed, then students. The list has now grown to include Shaka Smart, as well as MLB players Justin Upton and Justin Verlander who came into contact with Keyes at various points in their amateur careers. 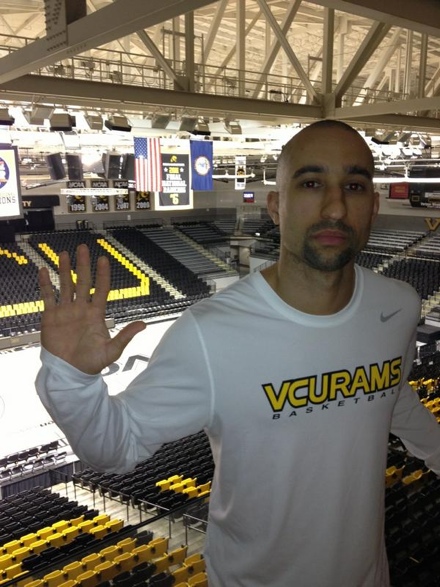 “I think it represents how strong of a legacy he leaves,” said Day about the explosion of support. “He touched so many different lives.”

Day said that despite VCU’s large population, approximately 32,000 strong, a death like Keyes’s and the resulting support that has followed shows that the University is “one big family.” On Friday, there will be a moment of silence prior to the national anthem ahead of the VCU men’s basketball season opener at the Siegel Center. Fans will be asked to hold up a high five to honor Keyes.

Paul Keyes funeral is scheduled for Wednesday, November 14th at 12:00 PM at the Cathedral of the Sacred Heart, located near VCU campus. It will be followed by a Celebration of Life at the Siegel Center.