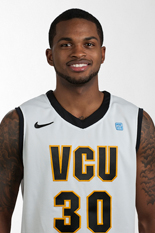 Shaka Smart says he’s the best shooter he’s ever coached: Troy Daniels is a scorer. Hot off setting the school record for season 3-pointers at 94, Daniels is poised to have an excellent senior season. Daniels is particularly good off the catch, and he will take shots from well beyond NBA range and still hit them.

Daniels has proven he can hit threes at a high volume and from anywhere on the court, but it is time for him shoot more efficiently. His 247 attempts from 3-point range set a school record and was 19th overall last season in the NCAA. If he had shot a very doable .420 from range, he would have made 104 3-pointers and scored an additional 30 points for the Rams.

Highlight: The VCU Rams held a 16 point lead over the Drexel Dragons at halftime in the 2012 CAA Tournament final. After a furious second half comeback by the Dragons, Troy Daniels drained 4 straight free-throws in the final 19 seconds to seal the 59-56 victory and send VCU back to the NCAA Tournament.