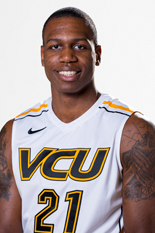 Treveon Graham is a serious candidate for A-10 Player of the Year alongside Juvonte Reddic, Dwayne Evans, and Chaz Williams. After a solid freshman effort, Graham exploded onto the scene last season scoring 544 points and grabbing 209 rebounds. He is too strong to be guarded by perimeter players and he is too quick to be guarded by forwards. Graham scored double-figures in 31-of-36 games, and he’s a solid rebounder. If Graham maintains last season’s efficiency while seeing a modest bump in playing time, he could post some extremely gaudy stats.

Playing as an undersized forward, Bradford Burgess was the glue that held HAVOC! together. With Burgess gone, Treveon Graham is poised to fill the void left by the legendary #20 and in many ways even exceed his predecessor. Graham has the physical tools and scoring ability to make his own name. Fans of Burgess can get excited because as a freshman, Graham was a more efficient rebounder, boasted a better steal percentage, and drew more fouls per forty minutes than last year’s lone senior.

Room for improvement: If Treveon Graham develops an outside shot he will elevate his entire game to a new level while spreading the floor for all of VCU’s weapons. Imagine 2011’s offense with 2012’s defense. The sophomore forward also needs to work on his free-throw shooting. He drew six fouls per forty minutes, but his 63-percent rate from the charity stripe left plenty of unfulfilled scoring potential.

Key stat: In the past thirteen seasons, only two VCU freshmen have scored 250 points. Bradford Burgess scored 253 points in 997 minutes, while Treveon Graham scored 252 points in only 604 minutes.

The youngest player on the team, Treveon Graham is one of the Rams’ most exciting youngsters. At 6-foot-5, Graham looks like a drive-happy Bradford Burgess. Despite being the Rams’ 7th or 8th man, Graham scored double digits eight times, and his ability to draw fouls is unmatched on the team.

Highlight: In the CAA tournament VCU was tied 26-26 with Northeastern at halftime. #21 went off, scoring 16 points on 6-9 shooting (3-5 from 3-point range). Needless to say, the next three years are promising for Graham.