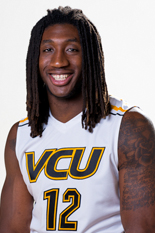 Coach Smart has never had a player who is 6-foot-6, 250 pounds, has a 7-foot-1 wingspan, and can run a 5:40 mile. Mo Alie-Cox has the physical tools to add an entirely new dimension to VCU basketball. Coach Smart has said he should be a part of the rotation, but his minutes will likely be limited. Because of his size, Alie-Cox will be really effective playing 5-10 minutes of exhausting defense on opponents’ best big man in order to prime Reddic/Shannon domination.

The NCAA ruled Mo Alie-Cox a partial qualifier and he was unable to practice or play during the 2012-13 season. Alie-Cox didn’t waste his free time. Last season, he earned the “Black History in the Making” award from the VCU Criminal Justice program while working to make his body HAVOC! ready. This past year, Mo Alie-Cox lost ten pounds while shaving three minutes off of his 8:40 time on the “Parking Deck Mile”.

After receiving offers from Delaware, Nevada and St. Marys, Alie-Cox chose VCU because of the hard work of Shaka Smart and Mike Rhoades.

As a senior at Middleburg Academy, he averaged 20 PPG and 10 RPG.

As a junior, he averaged 16.3 PPG, 12.1 RPG and an incredible 7BPG. Mo Alie-Cox led Middleburg Academy to the VISAA Division II State Championship where they fell to a James McAdoo (UNC) led Norfolk Christian.