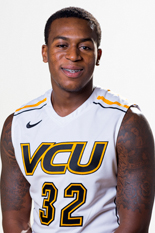 After joining the Rams very late in the summer of 2012 and struggling with an injured hip pointer at the start of last season, Melvin Johnson is poised to find success after his first, full offseason of improvement. The combination of his floater and 3-point shot already make him a serious offensive weapon. This season, he needs to develop into a defender that can help fill the void left by Darius Theus. Coach Smart has compared the trajectory Johnson’s career to Treveon Graham. If Johnson can make that kind of leap, he will be one of the scariest scorers in the A-10. Johnson scored 25 points and made five of his seven 3-point attempts in the Black & Gold Tip-off.

Almost overnight, Melvin Johnson went from playing basketball in green and orange to black and gold. The late addition of the former Miami signee was crucial to softening the blow of the losses of Jordan Burgess and Mo Alie-Cox–plus the Rams picked up a Bronx product that can flat out score. From day one, Johnson’s floater–dubbed “The Melvin”–was automatic, but it was his improvement from 3-point range that was impressive. After suffering through a midseason 0-16 shooting drought from range, Johnson went 13-24 (.542) from beyond the arc over the next nine games.

Highlight:Johnson scored a career-high 18 points in as many minutes in an 86-68 win over Massachusetts.

The highest ranked recruit to attend VCU, Johnson is an elite scorer. A true shooting guard, he will immediately be one of the Ram’s best 3-point shooters. With Jordan Burgess ineligible, Johnson will likely see even more minutes, but his defense must develop before he can become a consistent contributor.

Melvin Johnson originally committed to Miami, but was released from his letter of intent in July 2012 after arriving on campus. In one of the shortest recruitments ever, Johnson made his commitment to the Rams on July 20, 2012.