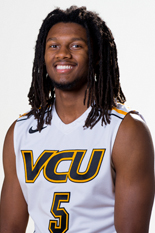 Doug Brooks is the closest thing to Briante Weber that VCU has seen since Briante Weber. Brooks has a non-stop motor, length, athleticism, a 3-point shot, and the tools to become a great defender for the Rams. Brooks averaged 16 PPG, 3.5 APG, and 5 SPG while shooting better than 40% from 3-point range during his senior season at Lake Wales High School in Lake Wales, Florida, but those numbers don’t capture his potential for wreaking HAVOC!:

A late addition to VCU’s 2013 class, it looks like Coach Smart has found another underrated player that will thrive in his system.

Dave Telep put him at #10 on his list of players having “under-the-radar seasons.”

Brooks could get lost in VCU’s stable of talented guards this season, but he has the tools and role to be one of the best sixth men in the county by his junior season.