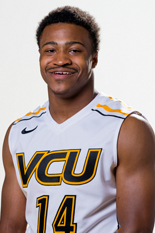 One of two Richmond natives on the VCU roster, Burston spent three years at Trinity where he lettered in four sports including basketball and football. He was the 2012 Prep Player of the Year. Burston joined the Rams midway through last season but redshirted his freshman year.

What Burston lacks in size, he makes up for in speed and hustle. He is a great on ball defender and he is lightning quick in transition. He isn’t a great shooter, but he has a decent command of the point guard position. While Burston probably won’t see many minutes because of the Rams’ depth, but he adds value to the VCU program.