Won’t you be my neighbor: Friendly competition on S. Addison

Two vintage shops on Addison Street are breathing new life into a small corner of The Fan. The 100 block of S. Addison was once known as Honeycomb, a hotbed of drugs, thugs, and violence, according to one perennial property owner in the area.

That same property owner once invited a homeless man to sleep in his (at the time) vacant building at 105 S. Addison. But as the drugs and violence outside the front door became intolerable, the homeless man left for a safer locale.

Drugs and violence no longer scare people away from the upper Fan neighborhood, and one reason why the area is safer is due to the popularity of Lamplighter Roasting Company, which opened in 2009. But two new businesses are helping to further scrub the Honeycomb aftertaste out of the neighborhood’s mouth, creating a new shopping destination in the process.

Addison Handmade & Vintage opened August 26th at 103 S. Addison Street, across from Lamplighter. It’s a business with not one, not two, but seven different owners, most of whom sell items from pre-existing businesses.

“I have some friends who have been doing Etsy for a while,” said Mat Shelton-Eide, co-owner of the shop and writer at VCURamNation. His idea was to have each friend sell their items under one roof:

The advantage is that rent and utilities are split seven ways, and each person works the store just one day a week. That limits financial risk because no one taps their life savings, and each person can keep his or her current job.

Shelton-Eide, who joined with his friends to start the business in an entrepreneur capacity, said he noticed the building in June. “We saw the ‘For Rent’ sign, and I knew it would go fast.”

Within a month they had a lease and began a two-month project to refurbish and style the building’s interior, the former site of Brown’s Beautirama. “We found light bulbs rotted to the sockets,” Shelton-Eide said. 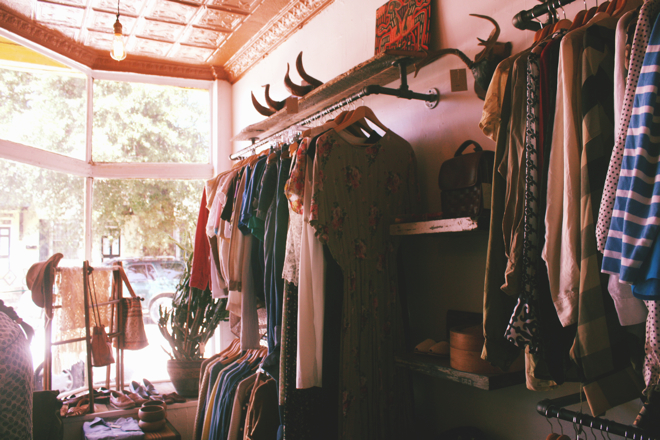 The interior now evokes a vintage loft chic, a look national brands might spend tens of thousands of dollars to create. However, the gang of seven achieved it by incorporating the building’s look, and through clever use of scrap material.

In addition to the clothes, knickknacks, and accessories each business sells, Addison Handmade & Vintage consistently rotates its selection of jewelry made by local artisans and those with local ties.

Not only is Shelton-Eide pleased with business so far, he’s proud that Addison Handmade & Vintage is helping to create a micro shopping corridor with Lamplighter across the street, Halona Glass next door at 101 S. Addison Street (opens in October), and the other adjacent business at 105 S. Addison Street: another vintage store, Yesterday’s Heroes.

In contrast to the group effort next door, Drew Spruill’s business is a one-man show.

“It’s all on me,” said Spruill one afternoon as he meticulously tweaked merchandise in the store until it was positioned just right. “I guess when you dream, everything is perfect in your dream,” he said. “Nothing is flawed.”

Spruill’s dream began roughly 10 years ago as a buyer at Need Supply Co. There he’d often want to buy items he thought would do well on Need’s sales floor and would help distinguish the retailer. But management didn’t agreed with Spruill’s tastes. “It was a matter of me wanting to do something myself,” he said.

Spruill later managed the now defunct Levi’s store in Short Pump. Despite having their store manager steer the failing location into profitability over three years, Levi’s closed the store in late 2011. Spruill soon filled his head with thoughts of opening his own business. “I thought about it every day for about a year and a half.”

“All along I was buying things to open a store,” he said. “My house essentially became a giant storage space.” About a month after his next-door neighbors got their keys, Spruill took over his spot at 105 S. Addison Street. Yesterday’s Heroes opened on September 1st. 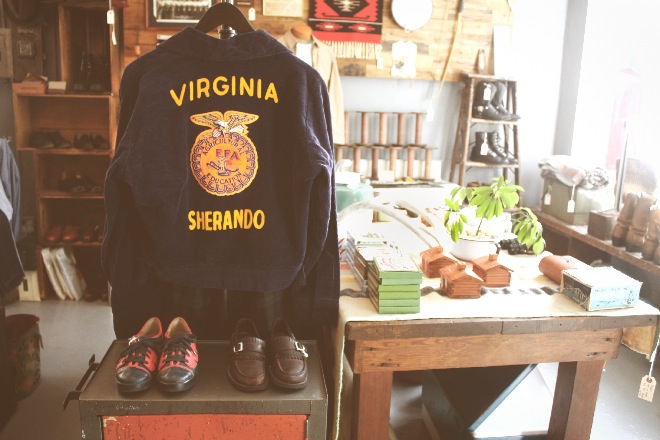 “I focus on hand-picking every item,” Spruill said, choosing things “you won’t see in every shop.” In addition to assorted clothing, Yesterday’s Heroes sells vintage knives, pennants, signs, and knickknacks other shops might pass over. A compliment that Spruill enjoys hearing is: This reminds me of my grandpa’s house.

Spruill was initially rattled when he learned that his next-door neighbors were also selling vintage items. “At first I was a little concerned about it,” he said. But he now believes that having another like-minded business will benefit both stores in creating a destination for vintage shoppers. “I do think we help each other out greatly by sharing customers,” he said.

Mat Shelton-Eide agrees. “I think it’s a positive thing” because both businesses create a “destination effect,” he said. He added that the two businesses harbor no ill will toward each other. “[Drew’s] my buddy. I borrow his tape measure every day,” he said.