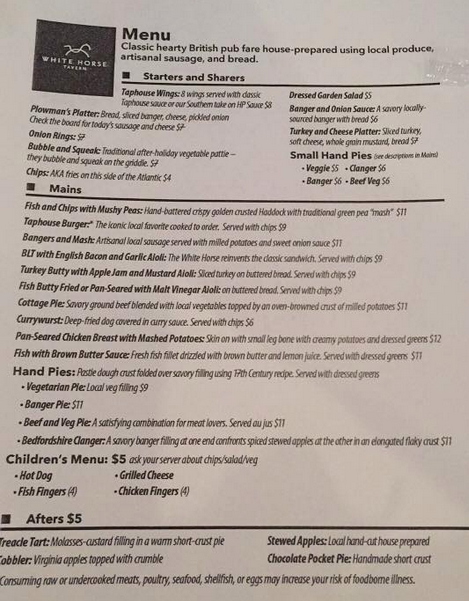 Also according to Facebook tonight there shall be BEER. ABC approved their license.

Good news is that White Horse Tavern is set to open tomorrow, Thursday the 24th.

Bad news is there will be no alcohol due to reasons unknown but can assume that ABC is the culprit.

Karri Peifer has a few more details at RTD and of course broke this news yesterday.

“We will be ready to open in two weeks. ABC keeps calling me, and usually it’s the other way around,” James Talley says. He’s standing in front of a long, shiny, wooden bar on one side of his new restaurant, The White Horse, on Semmes Avenue near Forest Hill Park. The place looks amazing. A huge silver garage door is getting some finishing touches and the bar adjacent to it needs some sanding and polyurethane, but newly-painted blue and silver walls frame the adjacent room where Talley can already picture the long booths that will seat up to 70 people.

Two weeks puts it in the end of August and you can bet I’ll be one of the first in the door.

Normally I’d just post a link to Karri Peifer’s RTD article (which has all the details) but I’m too excited to follow that protocol. First a few details from the previously mentioned article:

“I’ve had friends over in that area for quiet awhile,” Talley said. “There’s really no place to put restaurants.”

He said he and partner Jim Dickerson, who was his original partner on Commercial Taphouse, thought the space was just too good to pass up.

The plan is to open White Horse Tavern, paying homage to a British pub, The White Horse, in London.

“It will focus on fresh made savory pies, fish and chips, bangers and mash, cornish pastries,” he said.

Now some additional facts the location in question is 3410 Semmes Avenue previous home to Island Venture Restaurant and Panchino Carribean & American Restaurant and hopes to open in July.