Members of The Richmond 34 to speak this weekend

Members of a VUU student group who organized a 1960 sit-in protest inside a Richmond department store will discuss their experience on Saturday. This Saturday, the Maggie L. Walker National Historic Site will offer a free screening of February One, a documentary about four college students who, in 1960, took part in a sit-in protest at a Greensboro, NC Woolworth store, which helped ignite other non-violent protests across the country during the Civil Rights Movement.

Following the film, two members of The Richmond 34, Elizabeth Johnson Rice and Dr. Leroy Bray, will discuss their own experience participating in a 1960 sit-in protest in a Thalhimer’s department store in downtown Richmond (see below).

“Here in the former Confederate capital, almost a century after the Civil War began, African-American students advanced the struggle for full equality, a cause that also animated Maggie Walker’s life and work,” said David Ruth, superintendent of the Maggie L. Walker site. “We are excited to be able to offer this program to the community as part of the National Park Service’s ‘Civil War Through Civil Rights’ initiative.”

On February 22, 1960, a group of 34 Virginia Union University (VUU) students entered Thalhimer’s department store at Broad and Sixth streets in downtown Richmond. Soon after, police arrested each of them. The crime? Being black and attempting to eat at segregated dining counters.

It’s a historical moment, a moment that a VUU graduate will now turn into a feature documentary.

It wasn’t until 2010 that Brian Bullock, owner of documentary film company Bundy Films and a VUU alumnus, happened upon an article about the sit-in event in a VUU publication. “I was like, ‘Wow, I had no clue this ever happened,'” he said. It was a story that didn’t leave him. “I think this is something that should be known and told on a national basis.” He took it upon himself to tell the story, and his film, The Richmond 34, will breathe life into a vital part of Richmond history. 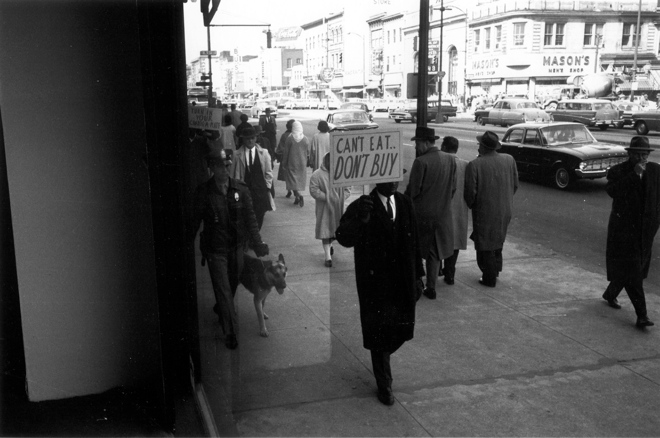 In early 1960, after entering the Thalhimer’s department store, several of the 34 VUU students convened at the building’s fourth floor restaurant, others walked to a lunch counter inside the popular store. The students’ goal: sit down and ask to be served.

The inspiration for this simple, yet revolutionary, act came in part by a recent speech given on VUU campus by Dr. Martin Luther King, Jr. In that speech, Dr. King encouraged non-violent means of protesting to bring about civil rights.

After the students sat down at Thalhimer’s and asked to be served, police entered the department store–some with German Shepherds. Leave or be arrested, the police told the students. The students didn’t budge, were arrested, and jailed.

After the NAACP bailed out the students a short time later, a crowd greeted The 34 as they exited the jail with applause and high-fives. The students had caused the first mass arrest of the 1960’s Civil Rights Movement in the entire nation.1 They were dubbed The Richmond 34.

Dr. Raymond Pierre Hylton, Chair of the Department of History and Political Science at VUU, said the event remains significant today “because society has changed so much in so short a period of time that many have forgotten…enforced racial separation.”

He believes a reason that many, even longtime Richmonders, don’t know The 34’s2 story is because “Richmond was blessed, in that the Civil Rights protests were carried out and largely achieved with a minimum of violence, and did not evoke the recognition of the more dramatic confrontations” across the country. “It is fair to say that the Richmond events were eclipsed by the larger and more horrific events of 1961-1968.”

Although a monumental act in its time, Dr. Hylton said the story “of hope for change and reform is highly significant for the present.” This modern relevance is one of the reasons Bullock has made it his project.

“They did it without busting out windows,” said the filmmaker about The 34 and numerous other non-violent Civil Rights protests of the era. “They had a plan and they methodically and systematically brought down what they thought wasn’t right…That’s the way you do it.”

To begin work on the film, Bullock first reached out to Dr. Hylton this past spring. He then contacted Elizabeth Johnson Rice, one of the students arrested 52 years ago, to gauge whether she and her fellow protestors would approve of the film.

“They were absolutely happy and supportive 100 percent,” said Bullock. He even created a four-minute trailer featuring Rice to serve as a teaser for the film.

Not only does Bullock intend to discuss The 34’s clash with segregation in the film, but also the man whose department store served as the epicenter of the story. 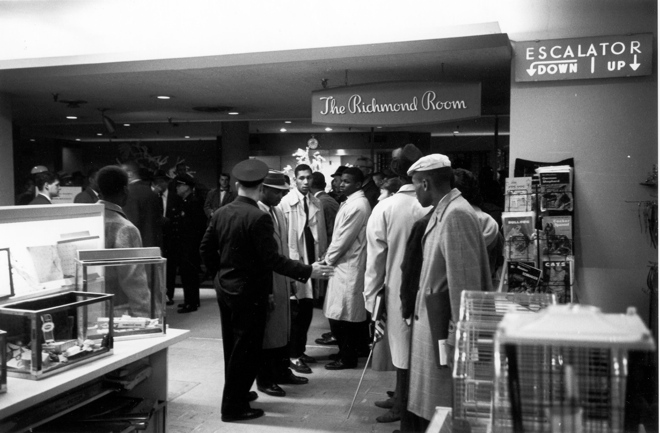 Based in Richmond, William B. Thalhimer, Jr. turned his great-grandfather’s dry goods store into a successful chain of department stores, scattering them throughout the South. One of which was the store on Broad and Sixth streets, The 34’s choice for their sit-in.3 “That tells part of the story,” said Bullock of Thalhimer and his role in the event. “But it doesn’t tell it completely.” The director said that Thalhimer eventually became “an integral part in desegregating the stores in Richmond” after the sit-in.

Elizabeth Thalhimer Smartt, granddaughter of William B. Thalhimer Jr., agrees. She said the story of The 34 is not a clear-cut story, but rather a “very complex, richly interwoven historical intersection.”

Author of the book, Finding Thalhimers, a biography of her family, Smartt4 interviewed her grandfather extensively about the sit-in. Although he facilitated the arrests, they were done to uphold existing laws. In fact, William B. Thalhimer Jr. had demonstrated his opposition to segregation through existing business practices.

After the sit-in, Smartt said there was a backlash against the Thalhimers. In addition to a protracted boycott against the stores, “a number of death threats were issued to the family.” By year’s end, William B. Thalhimer, Jr. implemented full desegregation in his stores: bathrooms, water fountains, and restaurants. Owner of one of the most popular stores in the city, his actions, widely unpopular among many whites at the time, helped usher in Richmond’s civil rights movement.

“They weren’t villains at all,” said filmmaker Brian Bullock about the family. “That intersection was not an accident…and it changed Richmond forever.” That’s the story Bullock wants to tell.

However, audiences will have to wait.

“I want to start significant shooting by January,” said Bullock, who recently hired key crew members to assist him on the project. “We’re almost at the point where we can probably start [featured] interviews.” The director hopes to have the documentary completed to air in February 2014 during Black History Month. He’s already spoken to local PBS station, WCVE, about broadcasting the film.5

Simultaneously, Bullock is working on another documentary, about legendary Bronx break dancer, Tony “Mr. Wave” Wesley, called Mr. Wave. “It’s a juggling act,” he said about balancing two concurrent projects, but added, “I would not have it any other way.”

Bullock said all of his documentaries tell stories where “cultural and ethnic lines blend.” But ultimately, he wants each film to be compelling for all audiences, regardless of race, gender, and position in society. “I want to tell stories that are going to interest everyone.”

Donations to support the production of The Richmond 34 project can be made here.