VCU Police Chief John Venuti has 91 officers under his command, but he also has another vital resource as his disposal: information. And the VCU PD isn’t shy about giving that information to the public.

That increased awareness is most apparent via VCU PD text and email alerts that divulge recent or ongoing criminal incidents on or near campus. “We generally use that method if it’s something that’s happening…and there’s an increased possibility of danger,” Venuti said. Students that attended VCU a decade ago (like me) seldom received crime alerts. Now it’s commonplace.

“We want to make members of the community aware of the things that are going on in and around VCU,” Venuti said. “That’s the only way for people to take the steps and measure to safeguard themselves.”

Venuti said one of the motivations for the increased transparency resulted from the 2007 shooting massacre at Virginia Tech. The event showed VCU, and other universities nationwide, that quick pings of information to students are vital during an emergency. Venuti said that the administration of VCU President Michael Rao, which began in 2009, has also fostered increased transparency and information sharing.1

Since September 1st, VCU PD has issued text alerts for seven situtations. Those include one unfounded hazardous material issue, an unfounded armed person, one off-campus homicide (which VCU had no legal requirement to report), and four robberies, according to a VCU PD spokesperson. Students, parents, and community members can sign up for the alerts online.

When asked if the increased number of alerts meant to inform the public had the unintended effect of scaring the public, Venuti said it doesn’t. The most recent “perception of safety survey,” which VCU conducts biannually, found that 75 percent of respondents said the alerts “make them feel more safe,” Venuti said.

The text alerts under urgent circumstances are just one way the police department communicates with the public.2 They also send out regular emails detailing recent incidents,3 as well as post on VCU’s alert page.

VCU PD also offers a “daily incident log” for both the Monroe Park and MCV campuses.4 Additionally, VCU PD has a campus security report (PDF) for both campuses spanning 2010 – 2012.

Here’s a video tutorial of the app:

Around Halloween, VCU PD launched PrtySmrt, an app wherein users receive police notification of noise complaints without a visit from an officer. The idea for the app came from a 2012 town hall meeting between Chief Venuti and VCU students. Several of those students lamented police presence in breaking up parties and issuing warnings on behalf of noise complaints, arguing it was a trivial way to occupy police time. Venuti agreed. 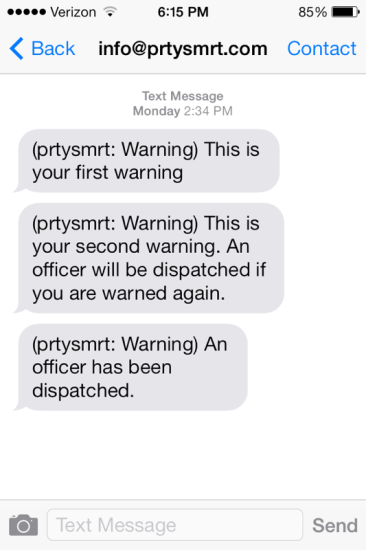 Tapping officers to warn loud parties about noise only pulled those officers away from more important policing, Venuti said. The PrtySmrt app allows party throwers to register their party online, so if police receive a noise complaint, those party organizers get a text message or phone call from the police asking them to turn it down.

Since debuting in late October, Venuti said that 18 parties have been registered, all without VCU promoting the service much. “It’s going to be something that we push [next year],” Venuti said.

The police chief said that the VCU PD will continue to use information and technology to connect with the VCU community, specifically students. “We’re really dialed in to the demographic that we serve,” he said.