Return the photo, no questions asked and make someone very happy. Good news the following was posted on The Magpie’s Facebook yesterday.

Rejoice! Delia Quinn has been returned! Thanks to the city of Richmond for aiding in the return! And thanks to the person who “borrowed” her and had the heart to return it! We all do stupid things sometimes and you are forgiven! Yay! 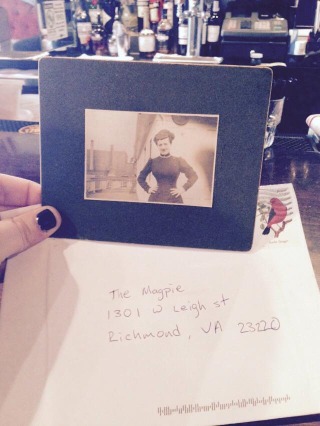 At some point last night someone stole a photo off the wall of The Magpie. Normally this wouldn’t be a story worth posting but after watching this heartfelt plea on Facebook for the return you’ll understand why we’re posting.

The photo stolen was the owner’s great great grandmother and was one of a kind.

Before you judge the owner for keeping a family heirloom in the restaurant watch the video on the second link. The restaurant is basically her home and she probably spends more time there that at home.

I’m not sure what goes through a person’s mind when they’re at a nice restaurant, see a photo they like and decide that should be mine. Hopefully they’ll realize that they didn’t snag a random thrift store photo but rather a piece of family history and return it to its home.