According to an article on Bustle the male students of Maggie Walker came up with a unique way to point out the unfairness in dress code enforcement at the school.

It was announced that the school would be doing an inspection of women’s shorts to see that they passed the finger tip test. The finger tip test is that the shorts must be as long or longer than your fingertip when your arms are at your sides. If ten women were found to be breaking the rule, all women would be banned from wearing shorts for a day. Many students felt that it was unfair to only require women to meet dress code standards and to punish roughly half the student body if ten were found in violation.

Here’s what happened next.

The student body was unsettled, said Guy: “I was in a club meeting [at the time of the announcement], and immediately I, and everyone else in the club, was shell-shocked and upset.” They wanted to respond, but they didn’t want to do so in an overtly aggressive manner. The best way to fight back, they decided, would be this: on a Thursday in late September, male students would wear shorts that barely skimmed the tops of their thighs, while female students would cover themselves in the most modest attire they could find. 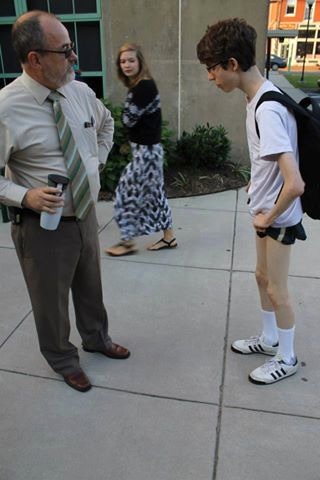