WCLM’s owner, Preston Brown, is hoping to turn his community connections and insight he’s gained over the years into a new opportunity to make a bigger difference, namely in the Virginia Senate District 16 seat held by Senator Henry Marsh for almost 20 years.

Inside Heart and Soul Sidewalk Cafe, a narrow dimly lit soul food restaurant on Hull Street, August Moon sat in the back corner booth. It was Super Bowl Sunday, and the Green Bay Packers were defeating the Pittsburg Steelers live on the flat screen above Moon’s table. But he paid little attention to the game.

Instead, Moon, dressed in a herringbone blazer and brown fedora sat focused on his dinner-a plate of spare ribs, collard greens, macaroni and cheese and corn. He ate slow.

“That’s soul food ain’t it,” Moon asked his colleague Joe Carter, who had pulled up a seat with him to discuss the day’s front page story.

Moon, a semi-legendary blues singer, music producer and self-styled city politician, is the self declared “mayor of Hull Street”. Everyone greets him, and the waitresses cater to his needs. He knows he is spoiled. That’s one reason he eats at Heart and Soul at least five days a week. The other reason: his community lacks a grocery store.

“There’s only one convenient store from Mayo Bridge to the top of the hill,” Moon complained.

South Richmond has been Moon’s stomping ground since 1978. Through the years; however, he said his neighborhood has gone downhill, and he wants to see more jobs and money in his community

Five blocks west of the cafe, its owner Preston Brown is campaigning to do just that. After setting up shop in 1993, Brown has owned three businesses in South Richmond: PT Brown Auto Sales, WCLM AM radio station and the Heart and Soul Sidewalk Café.

Now, Brown is hoping to turn his community connections and insight he’s gained over the years into a new opportunity to make a bigger difference, namely the Virginia Senate District 16 seat held by Senator Henry Marsh for almost 20 years.

Brown, 57, has acquainted himself with the people of Richmond on just about every level, from everyday people on the street, to area church leaders, small business owners and even local politicians. Although running as an independent candidate with a very small grassroots campaign, the Henrico County native believes his ability to connect with the everyday voter gives him an advantage his competitor might not have.

The 16th Senate district, a majority-black district in the General Assembly, covers part of Chesterfield County; all of Dinwiddie County and Petersburg City; part of Hopewell City; part of Prince George County; and part of South Richmond. According to the Virginia Public Access Project, the district has nearly 103,000 registered voters, the majority of which live in South Richmond.

Brown said he has enjoyed being a business owner; however, he felt that there was something greater he could be doing to make a further-reaching impact on Richmond. So on February 5, Brown publicly announced his intention to run for Virginia Senate.

The key issue of Brown’s campaign is jobs. More jobs in his community, he said, will stimulate Virginia’s economy. 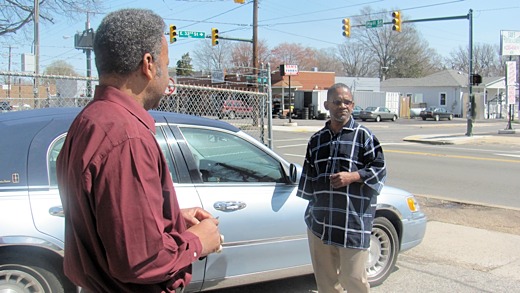 Because he’ll be running as an independent – with no August primary to worry about – Brown has more time than his major-party opponent to get his campaign off the ground. Currently, Brown has assembled a volunteer staff made up of family, friends, and other people who have shown interest in helping him, and he has set up a campaign office in his car dealership on Hull Street. He has already collected double the 250 nominating signatures necessary to get on the November ballot.

Dr. Bob Holsworth, president of Virginia Tomorrow, a nonpartisan blog on Virginia politics, said that although voters are increasingly identifying themselves as independents, it is far more difficult to run without major party affiliation.

“Independents don’t get the benefit of party expertise,” said Holsworth, who also serves as chairman of Gov. McDonnell’s Independent Bipartisan Advisory Commission on Redistricting. “An independent has to build the entire campaign from scratch.”

One thing Brown can capitalize on, Holsworth said, is name recognition.

“I think what Preston Brown is hoping, is the fact that he is a radio personality will help him,” said Holsworth.

But name recognition could be the number one advantage of incumbent Sen. Henry Marsh. Marsh is an attorney and civil right activist, most notably, the first black mayor of the city. The powerful Democrat has held the seat since 1992, longer than Brown has been in Richmond.

“It’s like Martin Luther King running for office…it’s that deep,” said Tiffany Ford, 30, who learned about Marsh’s legendary civil rights history as a law student at the University of Richmond.

“Senator Marsh feels that due to his years of service in the Senate he is able to get things done through the connections and relationships that he’s made. The senator feels that we need somebody in there (Virginia Senate) who has been there for years and has the connections and the political capital to get things done,” said Herb Smith, Sen. Marsh’s campaign manager.

Smith said Marsh is not looking to compete with Brown but instead to work with him.

“The senator applauds Preston Brown for getting out there and having a debate and discussing these issues…He (Marsh) feels we should work together to solve some of these issues.”

If voters want the same thing, Brown said, they will reelect Marsh. But if they are looking for a senator who is for the community, they will switch their vote.

“That’s what I’m running on, what the people want. If the people want a person like me, who will get in there and fight for you. Then they’ll elect me.”

For more information on voter registration, visit the Virginia State Board of Elections.