Show your RVA with a custom flag, new designs and new prices

Sandy reached out to me with a little update that I wanted to share. She is no longer selling the flags through other retailers, which means cheaper prices (house flag is now $70 and Garden Flag $30) and added a couple new designs you can see below. 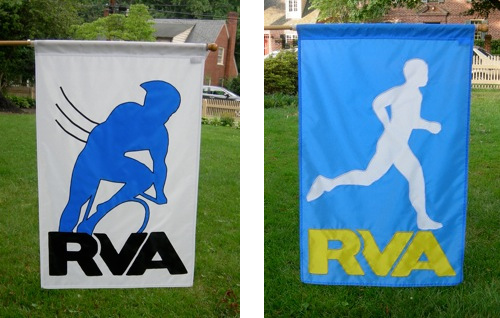 The RVA brand has spread to nearly every aspect of Richmond and the majority of cars.

Now you can combine your RVA pride with other passions. I know that there are quite a few Hokie fans around and you can get an RVA flag in the appropriate colors. How does this magic take place? You won’t need to call out of state, in fact you’ll be supporting a Westover Hills home business that has been decorating porches and gardens for years.

Sandy Gouldin has the nimble fingers behind The Gingham Tree which makes custom house flags (30” x 54”) and garden flags (14” x 18”).  If you’ve been to taZa lately you’ll have seen her work. If you look through Sandy’s online catalog and then take a walk through nearby neighborhoods you’re bound to see more examples. The previous link shows what she’s made so far but if you approach with an idea she’ll try to make it happen.

If the RVA isn’t your thing you can still dress up your porch and show your pride for whatever your mind comes up with.

A custom RVA house flags is $86 (prices for other custom flags you’ll need to talk with Sandy) and it’s smaller cousin the garden flag is $40. Sandy’s been making flags for over 20 years. Flags are made of 100% nylon bunting and constructed with a rod pocket and tab for mounting. If you’re interested in adding a little color to your porch contact Sandy through her website or by email goldnsand@verizon.net.

You didn’t think I’d forget to show off the VCU flag did you? I know way too many Rams to let that happen.