Sheltering Arms: A hospital with heart

For 125 years, Sheltering Arms has cared for and nursed countless people. It also has some CRAZY awesome technology! After people lugged deer carcasses to Sheltering Arms hospital, it was Foster Berry who would skin and butcher the dead animal before the meat was cooked and served to patients.

Berry was an orderly for Sheltering Arms for 34 years (1938-1972). He’d wheel patients to and from surgery, turn them over when they were bedridden, and do other orderly things. “Treat patients gentle” was his phrase. But it was his actions that patients admired and the Richmond Time-Dispatch wrote about more than once.

“Everything was donated,” said Stephanie Sulmer, current Director of Marketing & Public Relations at Sheltering Arms. Among donations included the occasional animal carcass that’d be cleaned, cleaved, and cooked. Local grocery stores contributed canned food and vegetables. “A lot of patients would stay with us and then come back and donate things,” Sulmer said.

For nearly 100 years, Sheltering Arms provided Richmond with free medical and hospital care. The nonprofit organization, which celebrates its 125th anniversary this year, is now a leading rehabilitation provider. Instead of relying on donated deer carcasses, it now has Star Wars and Robocop technology. 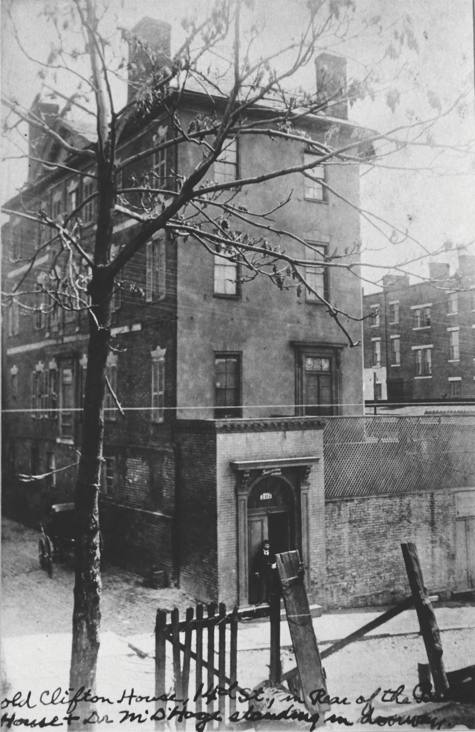 “She saw all this suffering,” Sulmer said about Peterkin. Programs like Medicare, Medicaid, and others that now help the indigent didn’t exist back then. “This was in the late 1800s when many free hospitals were opened all across the country. Hardly any of them still exist. And we were the last free hospital in the country. We didn’t send our first bill until 100 years after we were founded.” 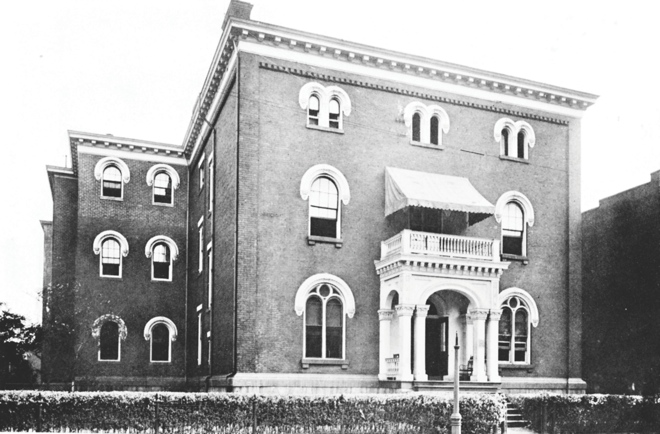 Physicians from the nearby medical college (now MCV) donated their time and services to Sheltering Arms. Each doctor also donated $100 to help move the hospital to the Clay Street location.

In those days, most (if not all) doctors were men. And while those doctors were vital to Sheltering Arms, women were its lifeblood.

Among them was Blanche Tayler King who helped Rebekah Peterkin establish the hospital and spent 49 years as its treasurer. As treasurer, she navigated Sheltering Arms across the perilous waters of financial uncertainty. She’d sometimes paint hospital rooms herself to save money.

Natalie Curtis completed nursing school in 1913. She became the hospital superintendent in 1922, remaining as such until retiring in 1954. Curtis met her son at Sheltering Arms. An infant, Tommy, was admitted to the hospital. Six months later, doctors realized that the boy’s mother was dying from tuberculosis. The boy’s father was unable to care for his son, so Curtis adopted Tommy and raised him.

In 1904, Sheltering Arms created its own School of Nursing. Among its graduates was Bertha Hobson, a widow and former patient at Sheltering Arms who was encouraged into nursing by Natalie Curtis. Hobson eventually become an operating room nurse and night supervisor for Sheltering Arms. 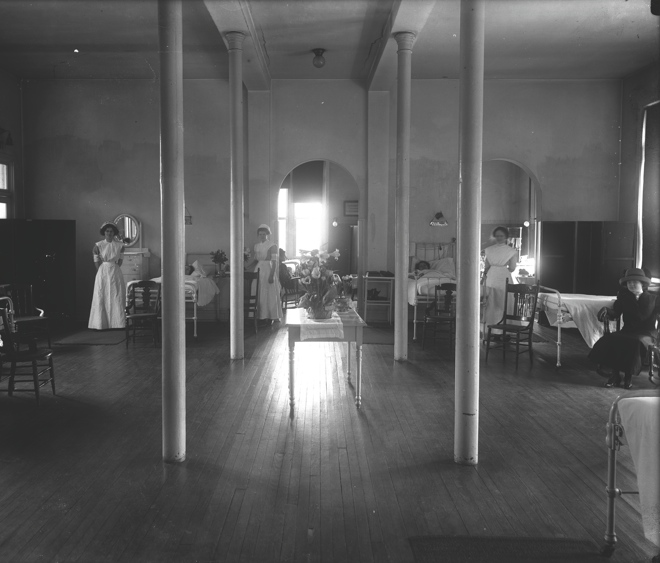 And then there was Margaret Nolting, who became one of the first two women in Virginia to earn a 4-year medical degree. She became an intern at Sheltering Arms in 1922. The next year she became its medical director, which she served as until 1949.

Sheltering Arms remained Richmond’s free hospital for 92 years. Then it had to change.

The creation of Medicare and Medicaid in the 1960s revised American health care by making health services more affordable to the needy. “Now these patients could go to any facility,” Sulmer said. Sheltering Arms, as a free acute care hospital, just wasn’t needed as much.

“Our mission was always to fulfill an unmet need in Richmond, and at that time [the lack of a free hospital] was the unmet need,” Sulmer said. With the advent of Medicare and Medicaid, the Board began to rethink how best to carry out the Sheltering Arms mission. It spent six years in the 1970s trying to figure out the next unmet need in Richmond. 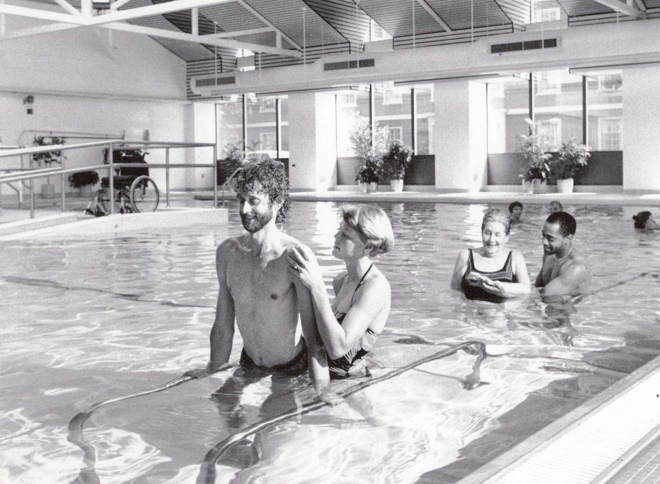 Among those employees are 27 certified rehabilitation nurses, likely the most employed by an organization located in Virginia. Sulmer said nine nurses have passed advanced certification to treat brain injuries.

“Many of our therapists are neuro-clincial specialists,” Sulmer said. “There’s not a whole lot of them in the country.”

Some of Sheltering Arms’ patients have suffered catastrophic injuries. One of them was Cole Sydnor, who as a high school junior in 2011, was with friends enjoying the James River. At one point, Sydnor dove into the James and was instantly paralyzed after hitting a rock head on.

He began outpatient therapy at Sheltering Arms in early 2012 as the first patient in the NeuroFit program, which addresses neurological illnesses or injuries. When he began at Sheltering Arms, Sydor was relegated to a power chair to move. In time, the physical therapy from Sheltering Arms gave him the strength to use a manual chair.

Every patient’s treatment depends, not only on their injuries, but on their goals. “Every patient has a different goal when they come here,” Sulmer said. For some it’s being able to snowboard again. For others it’s to repair a crippled leg.

And there are those, like Sydnor, who are severely injured following a traumatic accident, but are lucky to be alive. “They have their life, but they want their life back,” Sulmer said. “Our goal is to get patients better faster.”

Technology is one of the ways Sheltering Arms does this.

Sheltering Arms uses a trove of technology to help patients. For instance, there’s the Lokomat Pro, which helps those who are in wheelchairs and without the use of their legs. A single person wheels the person into the Lokomat and straps on a harness. The machine then lifts the person out of the chair into a standing position. Below the person is a moving conveyor, and in front of them is a virtual reality screen to help imitate the act of walking.

The machine leverages the brain’s neuroplasticity and its ability to rebuild the synapses needed to perform physical activity, like walking. The Lokomat’s motion and virtual reality components “trick” the brain into thinking it can power the legs again. “And once you start moving and those impulses start happening, you develop new pathways to the brain,” Sulmer said

The Tibion Bionic Leg works in a similar way. The battery-powered robotic device helps power a patient’s impaired leg. In a rehabilitation program, the device helps “rewire” the brain to improve the leg’s functioning. 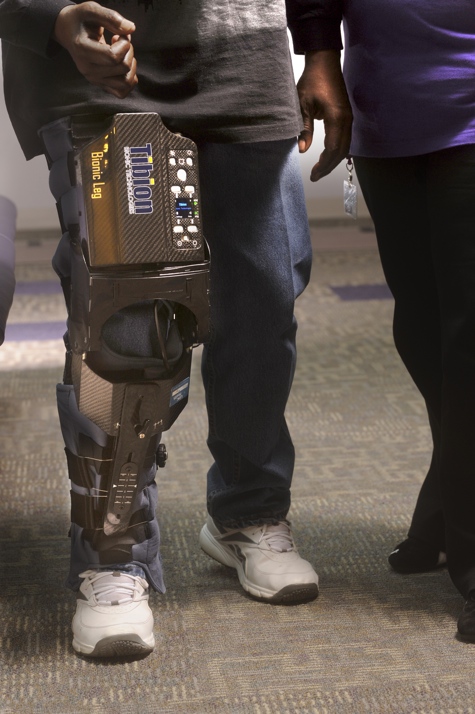 But while valuable, technology isn’t as invaluable as the people involved. “It’s the technology, but the people too,” Sulmer said. “We call it high tech; high touch. You still need the right people using the right tools on the right patients at the right time.”

“It’s the most committed group of people I’ve ever seen,” Sulmer said. “I’ve seen where a patient will come in and not have stuff and the nurses and the therapists will pool money together and go buy them [what they need].”

The patients are also an integral part in making Sheltering Arms special. “There’s no way you can work around these people and not be inspired to give everything you’ve got to helping them.”

Patients and staff give all they’ve got. So does the organization. “We don’t turn away anybody, regardless of ability to pay,” Sulmer said. Sheltering Arms relies on its foundation to fund its services, as well as donations from the community.

“We’ve been built on this community’s generosity,” Sulmer said. “This is a story as much about this Richmond community as it is about Sheltering Arms.”