Whether it’s a reminder of a loved one, a good story, or simply to showcase the work of an artist whose style you fancy, tattoos abound in the Capital City. There’s a good chance if you aren’t a tattooed Richmonder, you know someone who is. Recently named the third most tattooed city in the country, Richmond is filled with talented tattoo artists and their walking canvases.

Below you’ll find images showcasing some of the ink being sported by residents of the River City — individuals representing a variety of professions and walks of life but with a similar desire to tell a story on their skin. 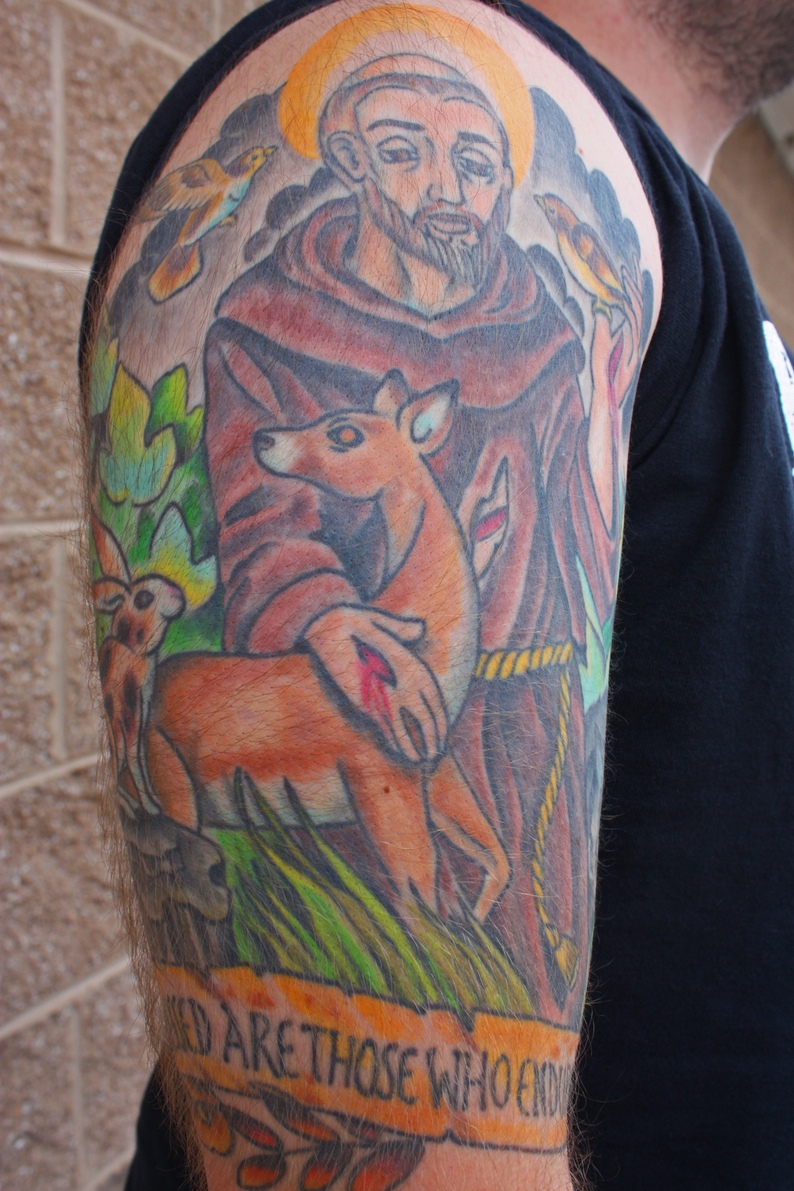 Tattoo pictured: St. Francis of Assisi — “Blessed are those who endure in peace”
Artist: Katie Davis at Salvation Tattoo, Richmond

“I got it because I like what St. Francis stands for – I like his ideology. It kind of serves as a reminder to me of how I should try to be.” 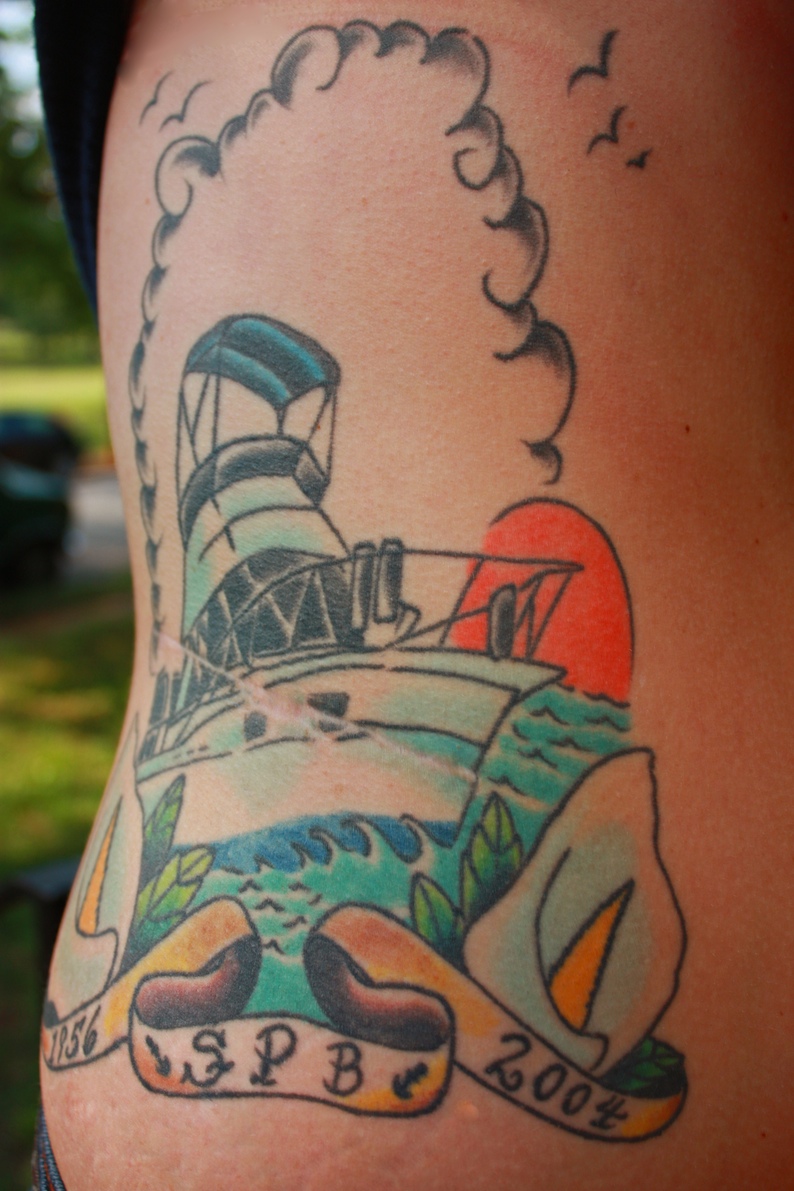 “When my Dad passed away, I wanted to get a piece in his memory. It’s the boat we had when I was growing up and the calla lilies we had at his service. [The scar is from donating a kidney to a friend.] It’s special because on that side I have a tattoo in honor of a life lost and a scar representative of the continuation of life.” 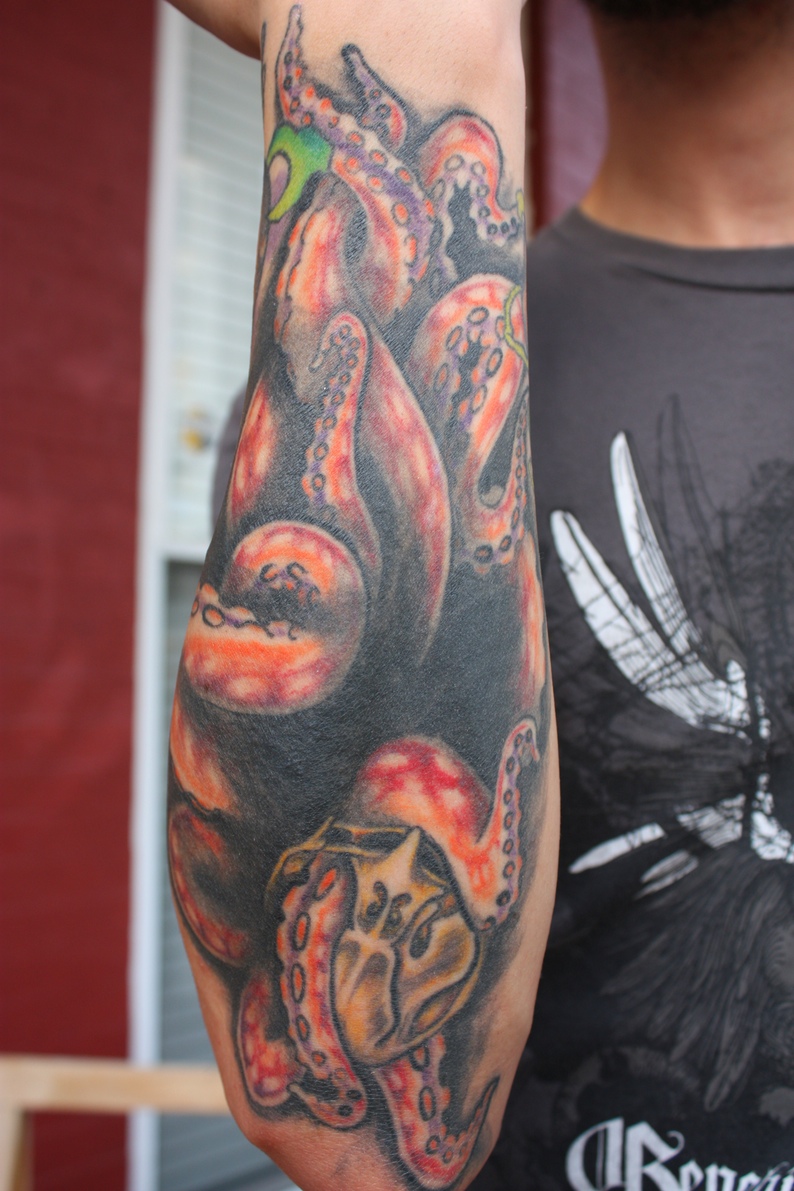 “This tattoo was the illustration of feelings I had over a long period of healing due to the loss of one of my closest friends. In all things that ‘be’ will come to pass and all things that pass feed what is ‘to be’. Clinging to that which ‘was’ will rob you of what this death could have conceived.” 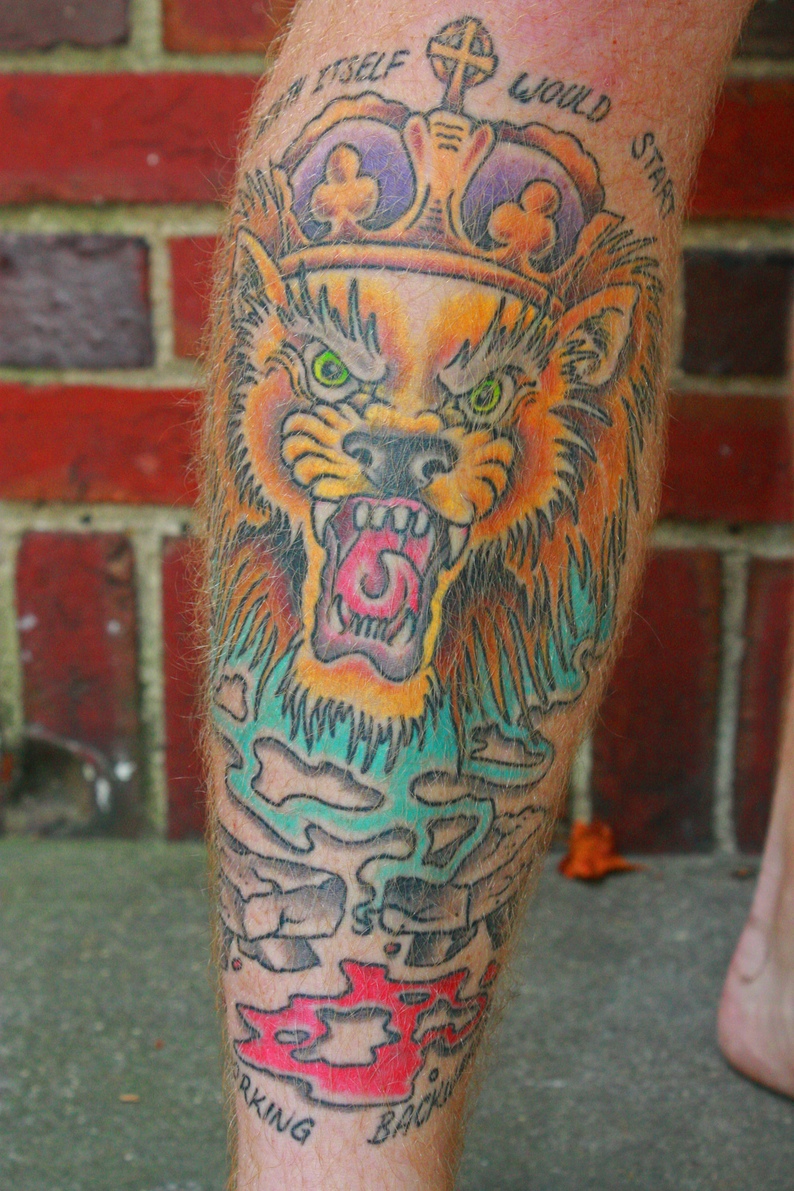 “I used to be a door guy [at a bar] and they used to project different movies onto the wall. One night they played The Lion, the Witch and the Wardrobe. There was a scene where the witch kills Aslan and the girls cry but then he comes back — it’s no real secret that C.S. Lewis was a Christian writer and that was supposed to represent that hopeful rebirth — so when that scene played, and I was surround by all this bullshit cacophony, I became really emotional. That’s a moment I will always remember.” 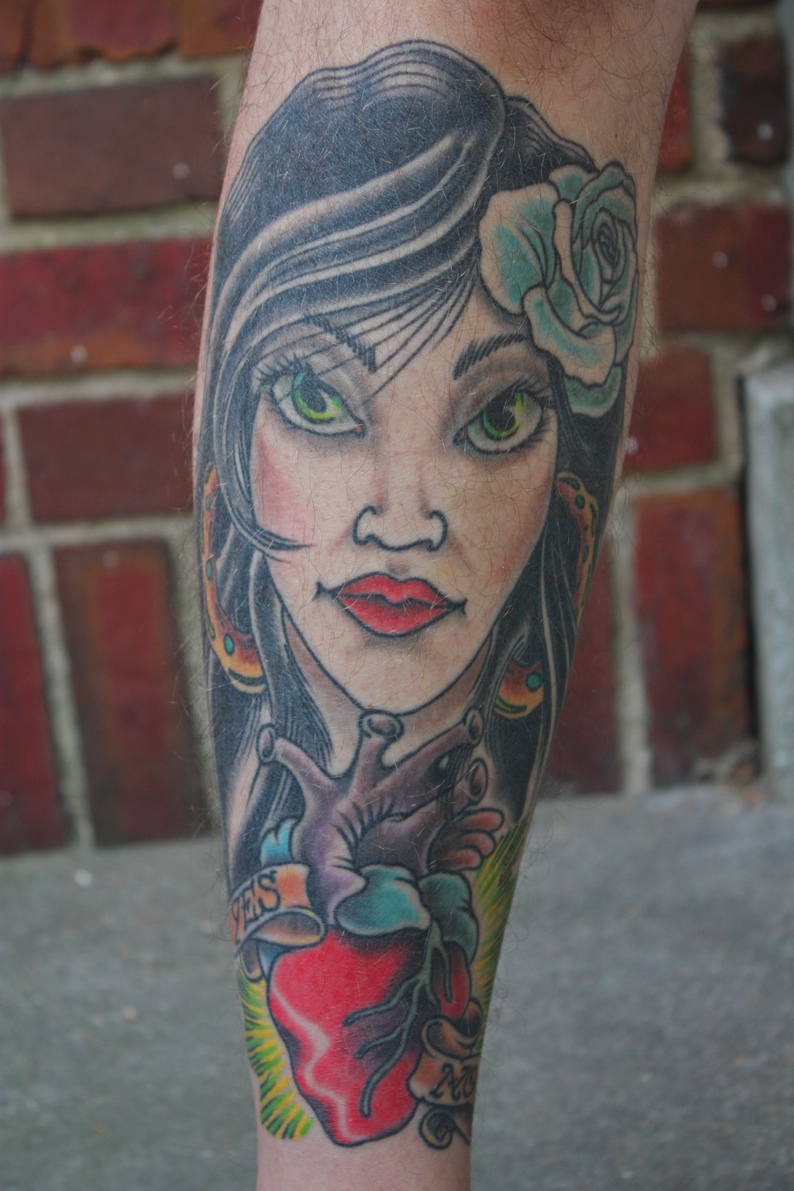 “I thought about getting it shortly after a relationship concluded. I wanted to get something that had a slightly melancholic feeling about marriage but also a hopeful one. And the ‘yes’ ‘no’ part, I would say, is symbolizing the unknown. 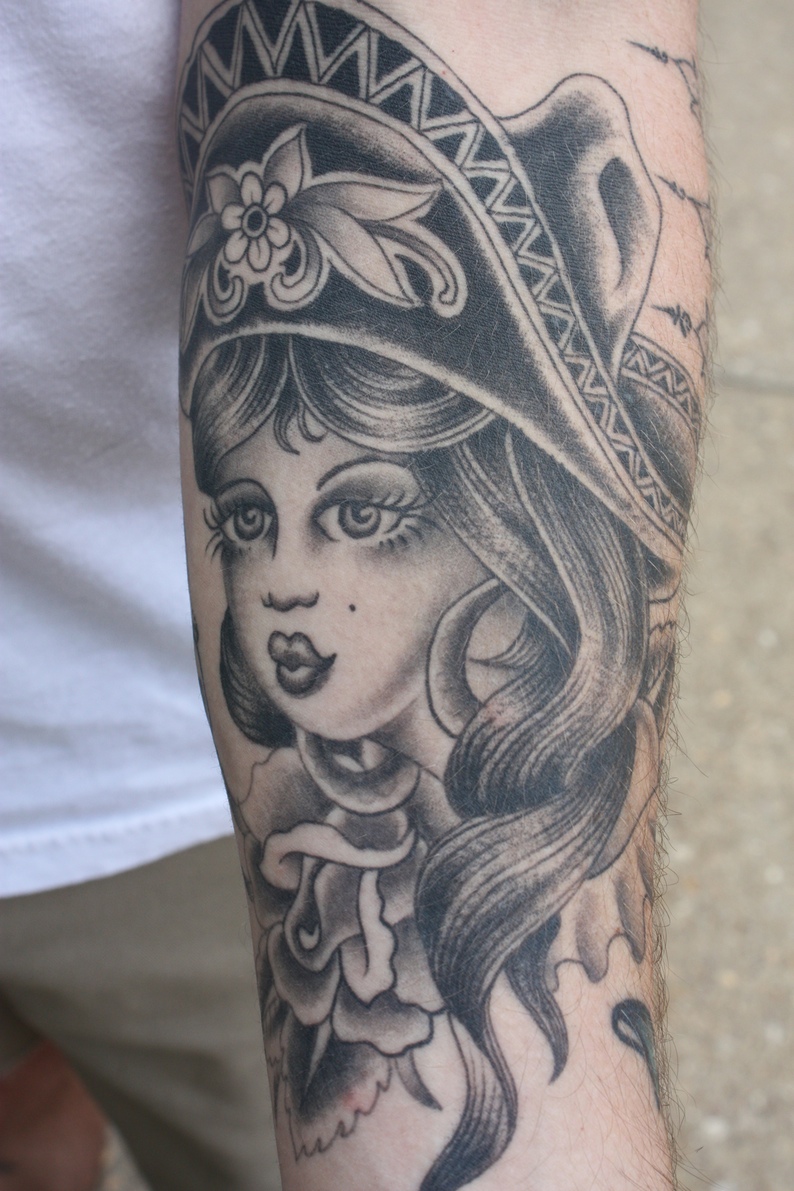 “I was at Absolute one day talking about the idea and asked Mike about it. I said I wanted a girl in a sombrero on my arm in black and grey — it was cool because he seemed really stoked on it.” 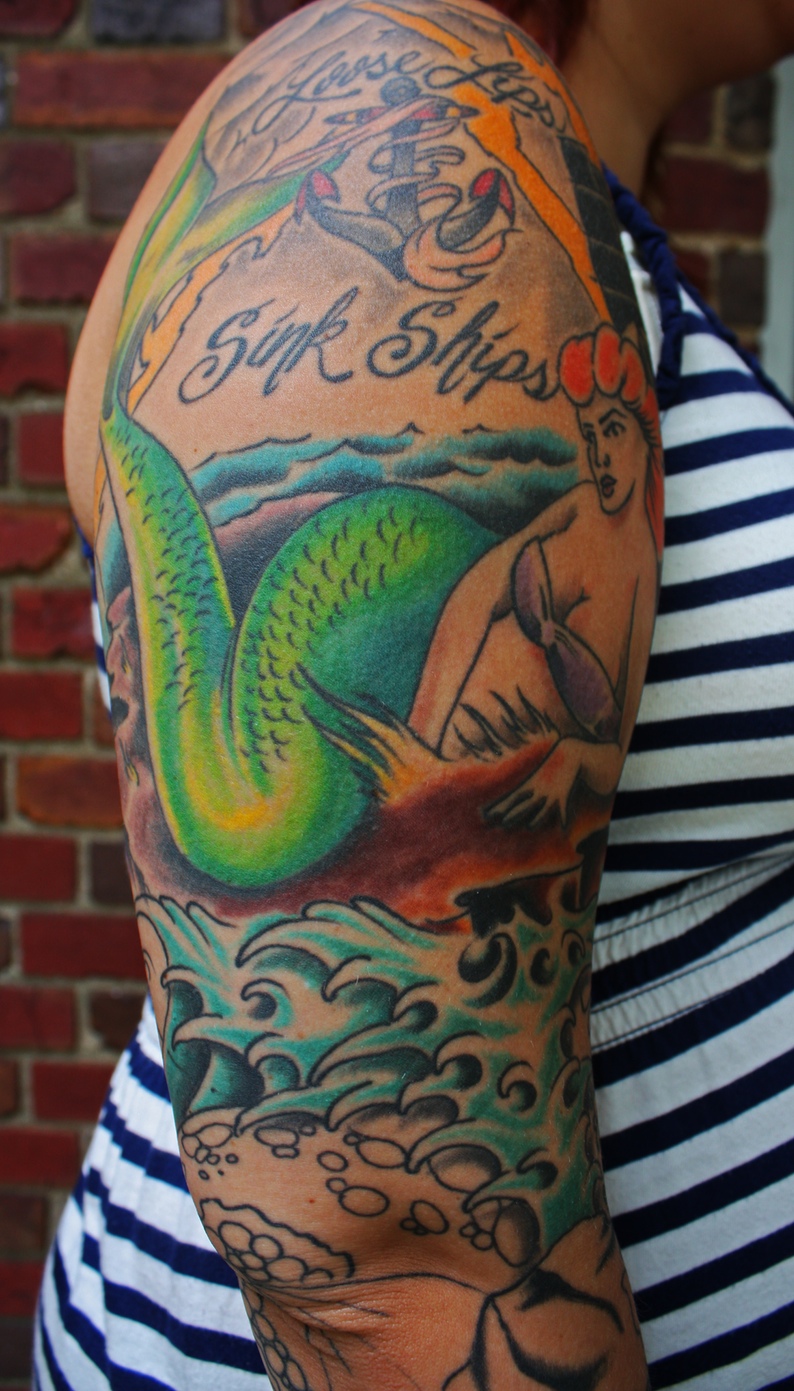 “I had always wanted to get a sleeve but it was such a ‘no-no’ to be a teacher and get tattooed where you can’t really hide them. So, I finally just broke down and did it. I just think women with sleeve tattoos is such a beautiful thing.” 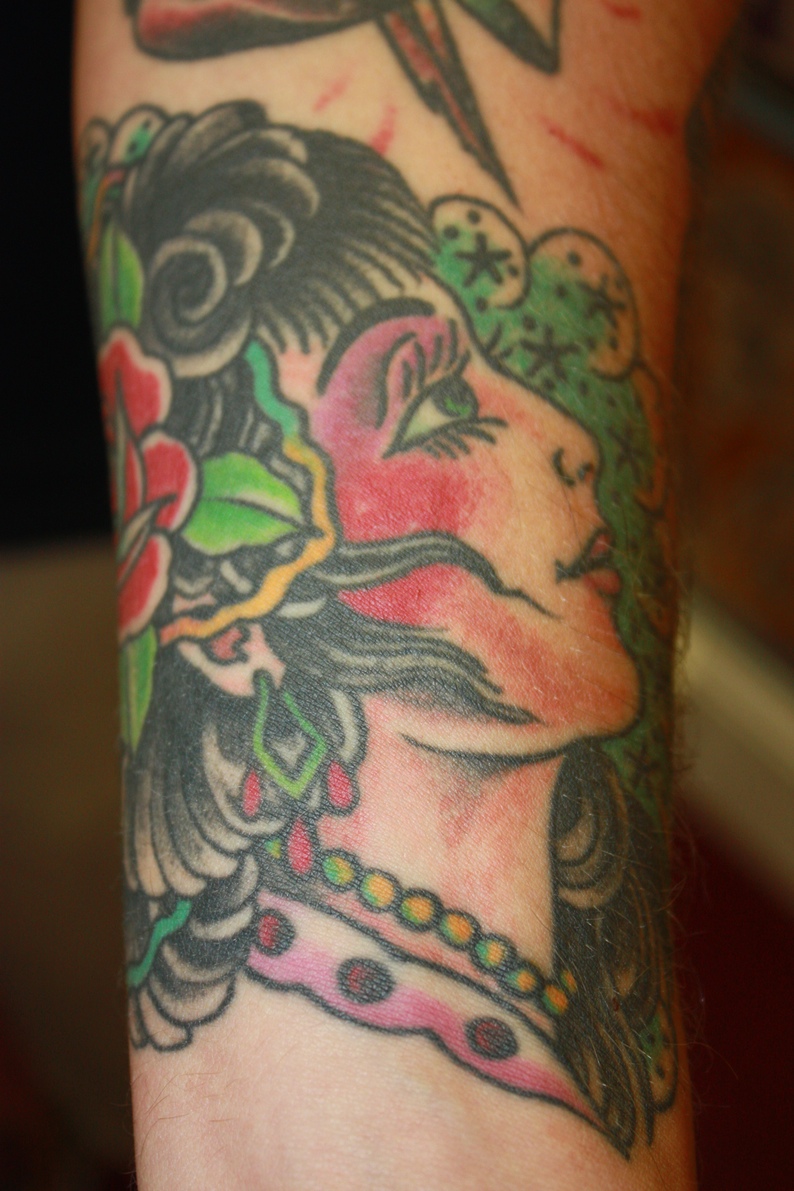 “This is my ‘grandma dedication’ tattoo. She was given up for adoption when she was a kid in Turkey. We don’t really know where she’s from because her mom burned all the documents but we think she came from a gypsy compound.” 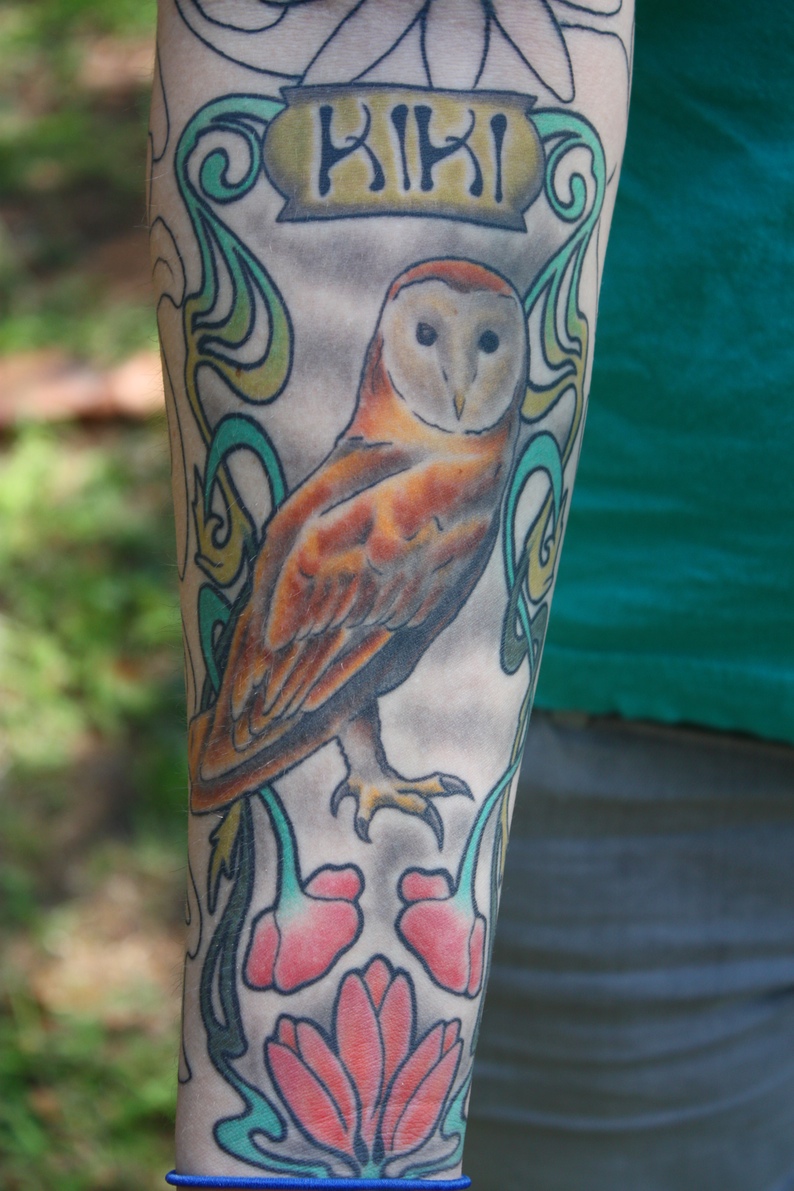 “My grandmother collected owls and I wanted to get something for her. Kiki was our nickname for her.” 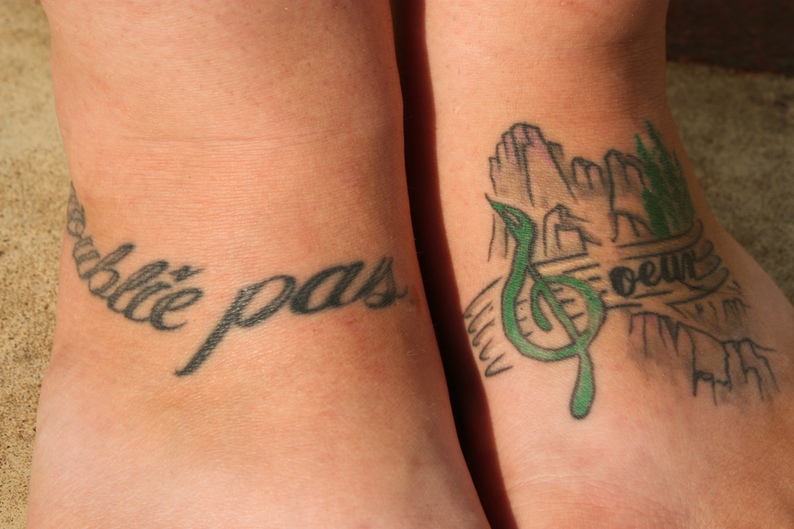 “I never want to forget where I came from and the events that created everything in my life today. My sister and I got matching tattoos in Montana, the state my family lives in and came from.” 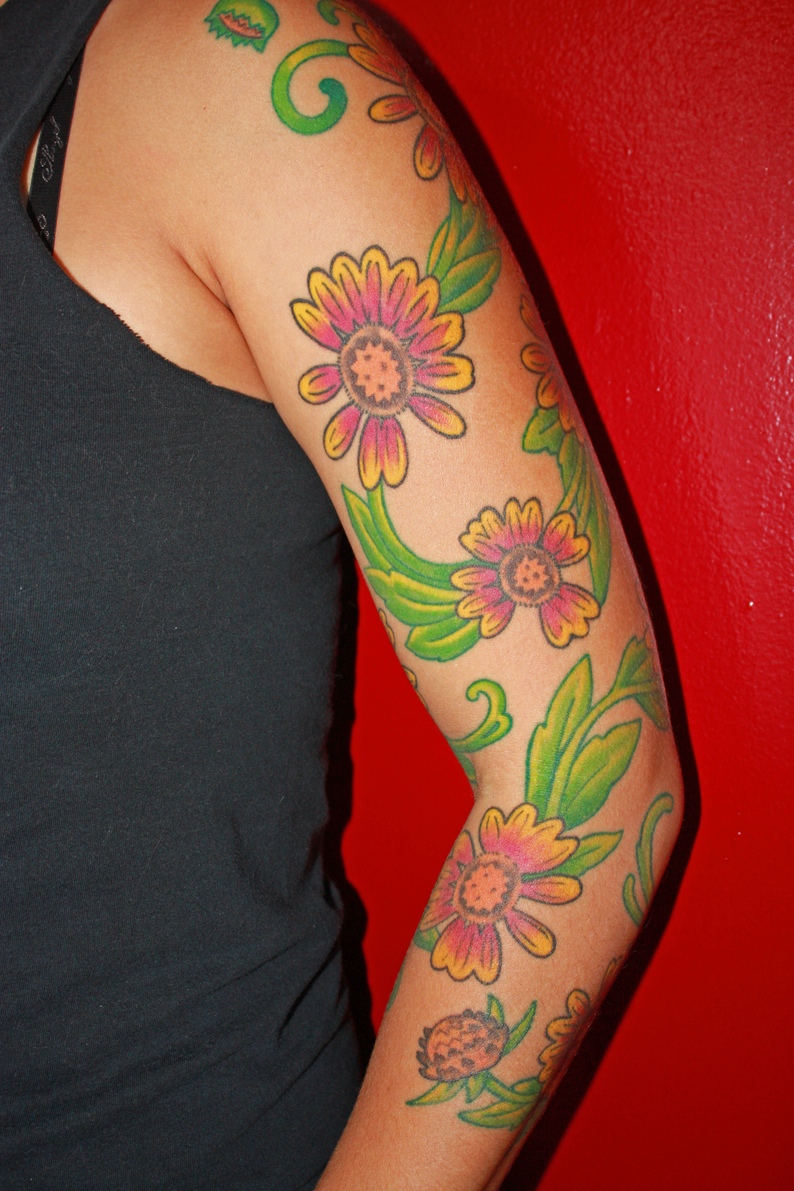 “Indian Blankets are the Oklahoma state wildflower (where I’m from) and they remind me of home. Most of the flowers you see in the wild don’t actually have all of their petals -– even though it’s imperfect, it’s still beautiful.” 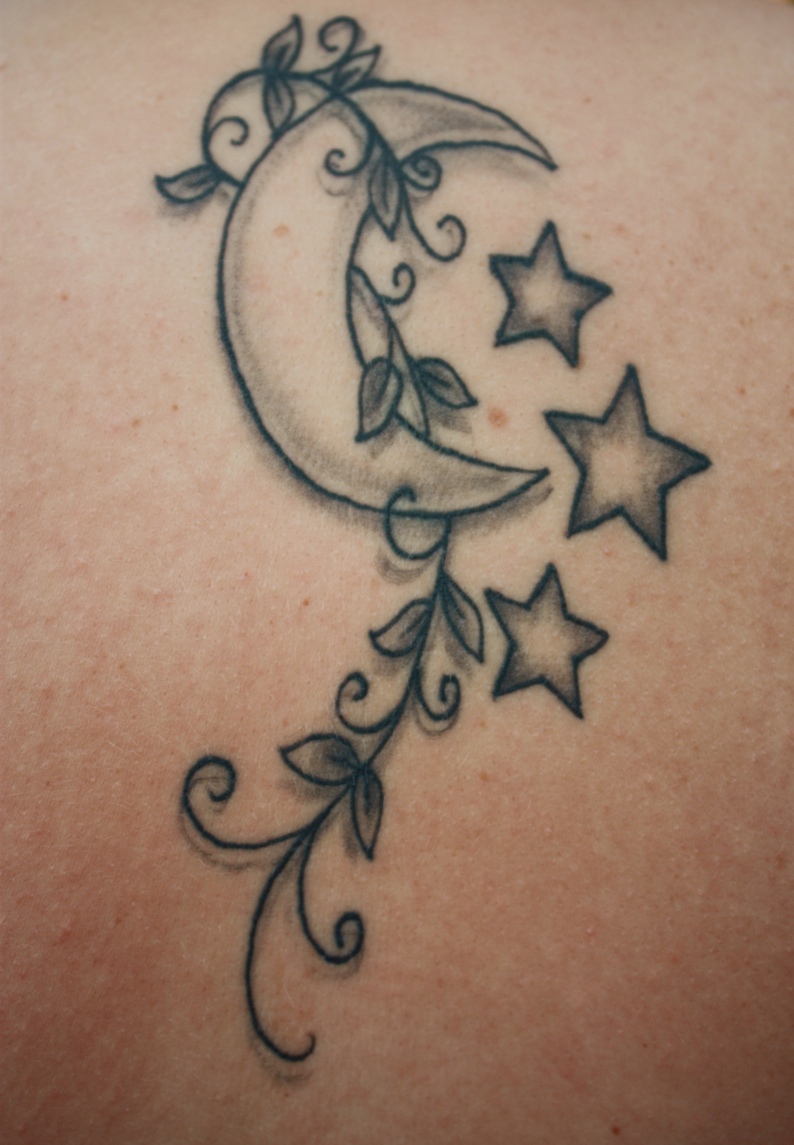 “The moon represents me – the name Phoebe means goddess of the moon – the stars represent my brothers and sisters, and the vine represents my last name. I had been planning this tattoo for four years and as soon as I turned 18 I went and got it.”

“I got this tattoo mainly because my grandparents were extremely influential on how I grew up. This is sort of a way to privately honor them.”

Tim Towslee: 33; high school English teacher; not sure how many tattoos total (that’s a lot) 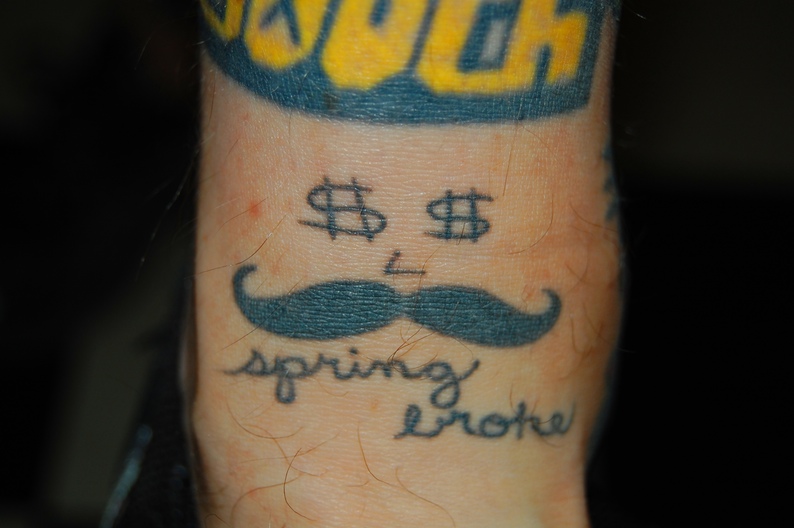 “A couple of years ago, Amy at Trademark held a special event where folks could get Spring-themed tattoos for a very low price. This one was originally supposed to be just a moustache, but since Amy and I are such tight buds, she let me add the dollar signs for eyes and the text. I always think I’m going to do a bunch of killer stuff for Spring break, but then it comes and I’m always broke because I have kids and a meager teacher’s salary. I couldn’t even pay for the tattoo, so I cleaned up the shop for her in exchange.” 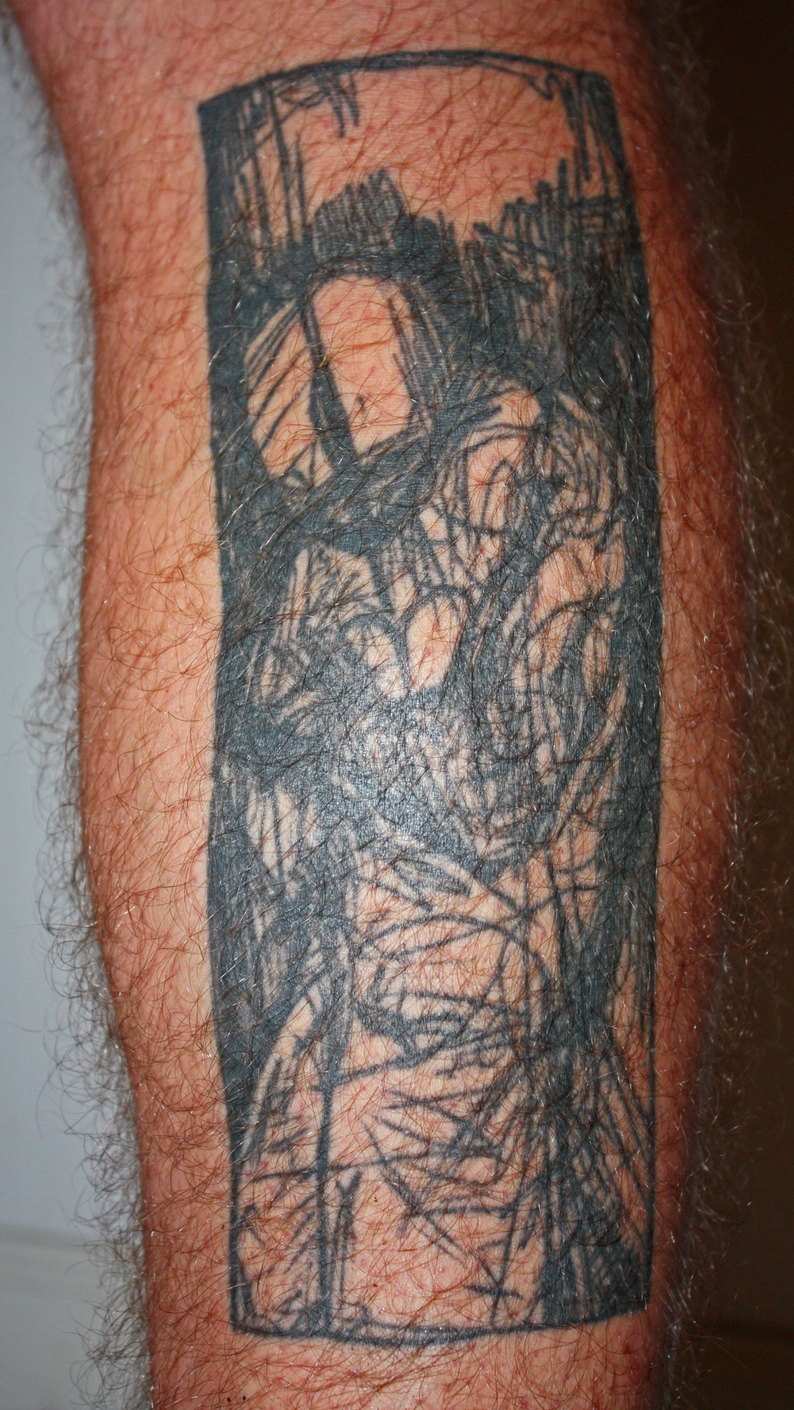 “The art appears inside Murdock’s first 7” record from 1997. Murdock was a band I was in from 1995 to 2006. The tattoo is a representation of the band but more so the friendships.”

Marge Weimer had the distinct honor of being RVANews.com’s first intern. She is a good sport, and we thoroughly enjoy her.