Richmond has one the highest levels of income inequality in the United States. The poorest fifth of the city’s households receives 2.4 percent of the city’s aggregate income; the richest fifth gets 57 percent. Windsor Farms is a historic neighborhood in Richmond’s West End just north of the James River. Its streets are lined with colonial-style homes meant to mimic an English village.

Seven and a half miles away is the Gilpin neighborhood in Richmond’s Northside next to interstates 64 and 95. Its streets are lined with one of the largest public housing projects on the East Coast, Gilpin Court.

Though just a 15-minute drive between Windsor Farms and Gilpin, the two neighborhoods are worlds apart in terms of socioeconomics. The average annual household income for residents in Windsor Farms is about $185,000; in Gilpin, the figure is less than $10,000.

The stark contrast in household earnings illuminates a disturbing fact: Richmond has one the highest levels of income inequality in the United States, according to data recently released by the U.S. Census Bureau.

Here’s another way of looking at the numbers:

The numbers are estimates; they’re based on the Census Bureau’s 2008–12 American Community Survey, which like all surveys has a margin of error. For the $7,386 figure, for example, the margin of error is plus or minus $415.

Even so, it’s clear that Richmond has a yawning income gap, and the widest in Virginia. Given the city’s history, that’s not surprising. Experts say segregation, racist banking practices and the construction of I–64 and I–95 disproportionately concentrated poverty in certain areas of the city.

That has been exacerbated by a lack of public transportation, the loss of jobs and a school system with more needs than money. The result: One in four of Richmond residents lives at or below the poverty line.

According to Thad Williamson, associate professor of leadership studies and philosophy, politics, economics and law at the University of Richmond, the lack of services prompted Richmond’s middle class to move to surrounding suburbs such as Henrico and Chesterfield counties.

“The school systems in Chesterfield and Henrico are higher-achieving on average than the city. And on top of that, we don’t provide transportation beyond the city lines,” Williamson said.

“So you have a situation where the average middle-class person has a huge incentive to be in a county as opposed to the city, especially those with kids.”

“Wages for the top 10 percent grew 19 times as fast compared to those at the bottom. The top 10 percent of earners– those are folks who are making at least $48 an hour– they’ve seen their wages grow over 8 percent since the start of the recession,” Cassidy said.

“But the wages for the bottom 10 percent of workers– these are workers making $8 an hour or less– they are now [making] 7 percent below their pre-recession-level wages.”

Virginia’s income gap has been growing for 30 years and is undermining the commonwealth’s economic prosperity, Cassidy said.

“As a result of these trends, Virginia is now facing record levels of inequality that really threaten the state’s economic stability and long-term prosperity,” he said.

“Middle-class and low-income individuals who make up most of the population in our state aren’t earning enough to buy the goods and services that the economy is capable of producing.”

It’s not just a problem in Virginia. Income inequality has been increasing in the United States for the past 40 years, according to the Center on Budget and Policy Priorities, a nonprofit think tank.

President Obama calls income inequality “the defining challenge of our times.” In a speech on December 4th at Knox College in Illinois, Obama said a ”dangerous and growing inequality and lack of upward mobility” have “jeopardized middle-class America’s basic bargain– that if you work hard, you have a chance to get ahead.”

The Census Bureau, economists, and statisticians measure income inequality with the Gini index, which calculates how evenly or unevenly incomes are distributed. The Gini index ranges from zero to one. A zero denotes perfect equality: a hypothetical society in which income is evenly distributed among all households. A one denotes maximal inequality: a society in which one household gets all the money and all the others go without. Thus, the more inequality, the higher the index. 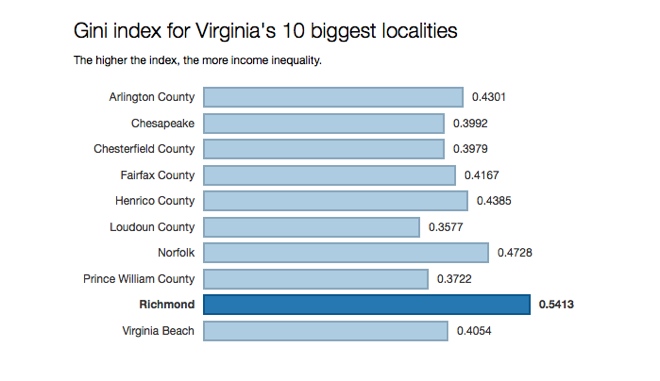 The Gini index for Richmond is 0.5413. That ranks No. 16 among the 3,143 counties included in the American Community Survey. (The U.S. Census Bureau treats Virginia’s independent cities as counties.) Manhattan (New York County) has the biggest income gap in the country, with a Gini index of 0.5994.

Moreover, Richmond had the third-highest level of income inequality among counties with at least 150,000 residents. Of these 401 localities, only New York County and Orleans Parish, La., had a higher Gini index than Richmond.

Richmond has the greatest income inequality in Virginia by far; the runners-up are Northampton County on the Eastern Shore, with a Gini index of 0.5291, and Charlottesville, at 0.5138.

A push for higher wages and better jobs

Growing inequality has sparked national protests such as the Occupy Wall Street movement; its slogan “We are the 99 percent” spoke to the unequal distribution of wealth in the U.S.

Fast food and retail trade workers have staged protests throughout the country calling on corporate giants like McDonald’s and Wal-Mart to increase the minimum wage to $15 an hour.

There are many theories for the continued growth of income inequality. They range from the elimination of jobs due to technological advancements to discrimination against women and minorities. Williamson believes the loss of jobs is the root cause.

“The heart of it is that the stable good-paying jobs that a person with a high school education or a little bit more could do– the jobs that created the American middle-class– have disappeared and haven’t been replaced,” Williamson said. “But at the same time, the people at the top have been doing just fine.”

The decline in high-paying jobs is pushing more families into the lower class, thus widening the gap between rich and poor.

Derek Chapman, associate director of research at the VCU Center on Society and Health, said the growing gap prevents low-wage workers from getting medical services.

“Health is really tied directly to the distribution of resources. So one of the single strongest predictors of our health is where we sit on the social class structure. Those with the highest levels of education, job category and income live longer lives and healthier lives, and those at the bottom get sicker and die younger,” Chapman said.

Solutions to income inequality have been bandied about for decades. President Obama has proposed closing the income gap between men and women, increasing the minimum wage, reforming health care, and investing more in education.

“For example, in the Richmond area we have a large segment of our labor force that is low-wage workers. These [proposals] would be hugely helpful to those workers in helping them move up the economic ladder, as they seek to provide for the needs of their families,” Cassidy said.

In the meantime, the city has begun to budget for the implementation of policies outlined by the Maggie L. Walker Initiative for Expanding Opportunity and Fighting Poverty, formerly the Mayor’s Anti-Poverty Commission. According to Williamson, who is co-chair of the initiative, these are exciting times.

“Already they’ve created a workforce development program that is very innovative and exciting because that’s getting people into living-wage jobs,” he said.