One of the leading figures that made Portland, Oregon the most bike-friendly city in the U.S. spoke in Richmond last night, along with other leading cycling proponents to a sold-out crowd. Can Richmond become the next Portland, or will it remain “the little city that could” in the cycling world

Just south of 200 people sat and stood inside the RF&P Railroad Company Forum in the Science Museum on Tuesday evening to listen to several bicycle-related discussions, including Mia Birk, author of the new book Joyride: Pedaling Toward A Healthier Planet. Among the attendees were local politicians as well as local police. Sargeant Brand of the Henrico County Police Department attended the event on behalf of his department to better learn “what we can do to help.” The Virginia Bicycling Federation sponsored the event.

Eric Weis of the East Coast Greenway Alliance spoke first. His hour-long presentation highlighted the Durham, North Carolina-based non-profit’s goal to strengthen and expand the East Coast Greenway (ECG). The ECG is a 2,900 mile coalescence of bicycling, pedestrian, and even equestrian trails that runs from Calais, Maine to Key West, Florida. Currently 26% of the trails are traffic-free (those not connected to roads trafficked by automobiles). Their long-term vision is to make all conjoined trails traffic-free, including existing trails in Richmond, as well as in surrounding counties.

Tim Miller of Richmond 2015, a group bidding for Richmond to host The UCI World Road Cycling Championships in 2015, spoke next. The UCI Championships is a world-class event and, as Miller maintains, would invigorate bicycle-friendly initiatives in Richmond as well as feature the city to a global audience. Richmond’s remaining competitor in the bidding process is a city in the middle-eastern country of Oman.

The final speaker was Mia Birk. She became the Bicycle Program Manager of Portland in 1993, helping to make Portland the most bicycle-friendly urban area in the United States. Birk supports a common-sense approach to implementing bicycle-friendly policy. She realizes that not all people can travel via bicycle. “It’s not an extremist approach,” she says of her cycling evangelism. But she also maintains that there is a desire, even among the non-cyclists, to transition at least some of their commuting to a bicycle. 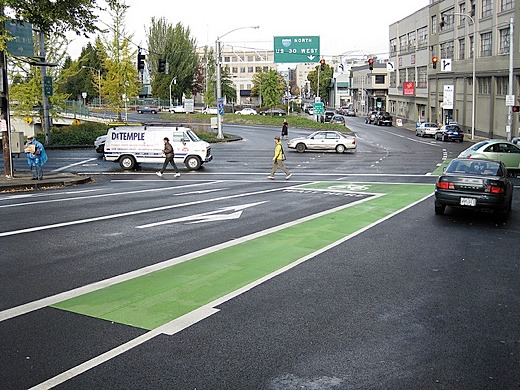 A green lane in Portland.

60% of Americans would like to bike, said Birk, but are intimidated by the lack of safe bike lanes. Birk presented keys for communities that would like to spur bike-friendly initiatives and policies. She maintained that leadership is crucial, both at the political and community levels. A “bold, visionary plan” is also necessary–one that considers a 20-year time frame, one that is “doable.” A necessary step for Richmond to take, said Birk, is to have a bike lane coordinator. According to her, Richmond is “close” to filling such a position for the first time–to which the audience applauded.

She also stressed patience. Currently, Portland has 320 miles of bike paths, a number that caused several in the audience to gasp with envy and hope (Richmond has only two bike lanes in the entire city). Safety has also increased in Portland with the rise in bicycling. “As bike usage has gone up, crashes have gone down,” said Birk, which was immediately followed by applause. The more biking became an acceptable form of transportation, the safer both bicyclists and motorists became.

In the 20 years that Portland created and implemented its bicycle-friendly initiatives the city invested $60 million, which amounts to less than 1% of Portland’s transportation budget. The same amount of money, Birk said, would provide only one mile of urban roadway.

Birk recommended the NACTO Urban Bikeway Design Guide as a resource to both inspire and guide local bike-friendly initiatives.