The worldwide Occupy movement assembled in Monroe Park this weekend to organize and then march downtown, giving public voice to their many oppositions to a host of economic and tax issues. An account of what happened, and what the local movement plans to do.

Around 300 people assembled in Monroe Park late afternoon Saturday to take part in a local gathering of the national Occupy movement. Occupy began with the initial and ensuing Occupy Wall Street rally and has since inspired similar protest events nationwide–as well as in Europe and Asia. Meeting at 4pm, the age of the attendees ranged from early twenties to those in their mid-sixties.

“There’s something immoral about the [financial] structure,” said Jane McNeil, 65. “It’s not right.” McNeil took part in the civil rights and anti-Vietnam War protests in the 1960’s while living in California. Although many say that the Occupy movements spring out of Liberal political philosophy, McNeil maintains “it’s not political,” that the movement does not restrict those who participate based on political affiliation. She joined the Occupy Richmond event to support the idea of communal distribution. “The word ‘share’ doesn’t exist in people’s vocabulary,” said McNeil. She says that we are taught, by and large, that it is a “virtue to give.” But, McNeil said, it’s largely felt that any sort of government munificence rewards “lazy bums.” 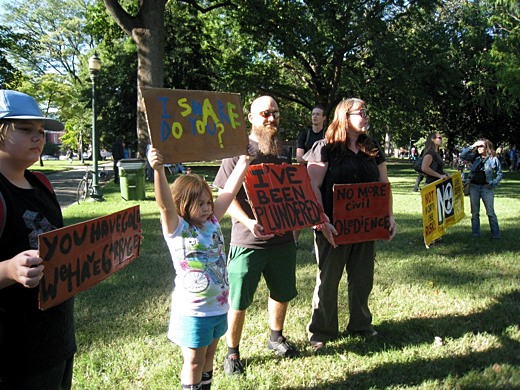 One Fulton Hill couple, Kimmy Certa and Chris Farmer, brought their children, 7 and 12 years old, to the event. Their youngest conceived of and created a sign that read I Share. Do You?. “We’re exhausted,” said Kimmy Certa. “We’re hard workers trying to raise our family.”

Farmer lost his job in 2008. He’s since been “under-employed,” working part time. “We had to choose to pay the mortgage or buy food,” Certa said. So overwhelmed with expenses, the family has filed for bankruptcy. Certa said that they do not own, nor seek, luxury household items such as large flat-screen televisions. “We live modestly,” she said, but cannot afford to pay for their mortgage, food, and essential services in total.

“We didn’t get our bailouts,” said Certa, referring to the government-backed loans provided to various banking institutions in the late 2000s, institutions that many feel are responsible for the current financial calamities taking place world-wide. She said that she and her husband have discussed with their children the financial issues that have afflicted worldwide markets and people. Certa said that their children were initially skeptical to attend because they feared that people would be arrested.

Event organizers held a democratic vote to decide where they would convene. Monument Avenue and Kanawha Plaza were the options, with the Kanawha Plaza having been decided upon around 6pm. City Councilman Bruce Tyler was in attendance to watch the event, although he maintained that he was a disinterested party, attending only for observational and curiosity purposes.

Several of the event organizers were upset because of a permit that they claimed to have been vocally promised by Richmond Police Captain William Smith was not issued. The organizers maintained that they had been vocally assured that they would be granted a permit on Saturday to occupy whichever location was voted on by the marchers. They said that Mayor Dwight Jones, however, decided late Friday afternoon that no special events permit or permission would be given to the protesters.

The marchers felt that this was an example of senior local government officials trying to mitigate the influence of the protest. Captain William Smith, however, said that no special event permit (a document issued by the City) can supersede existing ordinances. He said that, because a City statute prohibits the individuals from occupying public parks after dark, no permit could allow for that type of assemblage. He said, however, that someone like the Mayor could issue special permission (which is distinct from a City-issued permit) for an event to supplant existing ordinances (e.g. a midnight vigil). It seems that Mayor Jones’ decision late Friday affirmed that he would issue no special permission for the Occupy Richmond event, which some in the movement misinterpreted to mean that the city had tried to suppress the movement. A city official informed me that no member of the Occupy Richmond group had filed for an official permit that would have granted them park access up until dusk, when all Richmond parks close.

Once it was decided that Kanawha Plaza would be the location for, what protesters referred to as not a protest but an occupation, about two thirds of the original crowd marched to the plaza. Among the chants shouted as they marched downtown were: “What’s outrageous? / Wall Street wages” ; “All night. All day / Occupy R-V-A” ; and “We are the ninety-nine percent.”

The group arrived to the presence of several police officers, and a printed letter tapped to the Kanawha Plaza park sign from Larry Miller, Operations Manager for the City of Richmond, reaffirming that all of Richmond’s park close at sunset.

Working with police, the protesters moved to the sidewalk at 7:30pm, the time in which police said the night-time hours would begin, avoiding the violation of the city’s ordinance that prevents assembly at night.

Captain Smith said that was an ongoing dialogue between himself and the protesters “throughout the week and today.” He also said that the protest organizers had been professional, had done their part to facilitate a “peaceful and non-violent protest.” Danielle Lewis, point person for the occupation’s legal team and University of Richmond student, said that “Capt. Smith has been incredibly cooperative.”

Select protesters remained at Kanawha Plaza throughout the night while remaining on the sidewalk. The Occupy Richmond participants hope that the occupation of Kanawha Plaza will continue for several days.

There are 26 reader comments. Read them.