President Obama spoke at the University of Richmond this afternoon to garner support for his proposed job-creation legislation. We’ve compiled essential tweets from people about his visit, as well as accounts and photos of those who waited in line to see the President speak.

President Obama spoke at the University of Richmond earlier today to drum up support for his recently proposed American Jobs Act. Over 8,000 attended the UR event at the Robins Center.

Because officials anticipated large crowds at the event, the University of Richmond hired Groome Transportation services to shuttle individuals from City Stadium to the UR campus. Because of large crowds on the UR campus that held up buses, many individuals who waited in line yesterday for free tickets to watch the President’s speech were delayed in arriving on campus. 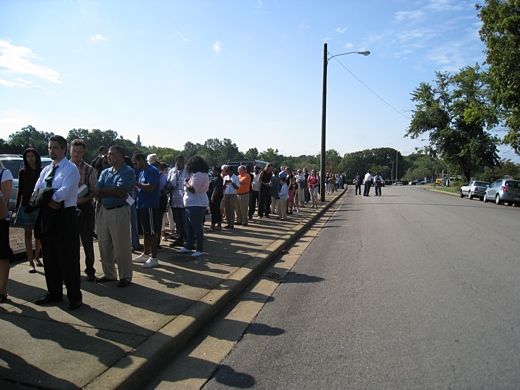 Some individuals, after earning a seat on a shuttle bus, immediately returned to City Stadium after witnessing long lines. One man informed RVANews that the “airport-like security” delayed crowd entry and made it seem that it “would take three hours” to get in. This was said at 10:15am, less than an hour before the President’s scheduled speech. An elderly woman collapsed near the City Stadium lines, and was attended by emergency response personnel.

The line to gain entrance into the Robins Center stretched an estimated one mile long. One young woman told RVANews that she had waited in line for over an hour, and was only 3/4 of the way through the long wait. 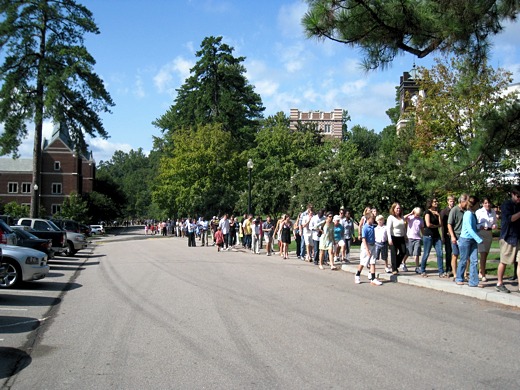 Crowds waiting to be let in the Robins Center, University of Richmond