The new roundabout encircling the Robert E. Lee statue is now complete and brings safety wins to pedestrians and motorists alike. First, check it out, in this very pretty drone photo courtesy of Creative Dog Media:

The two big goals of this project (read below for more details and a good Days of Thunder joke) were to:

The distances pedestrians must now cross to get from one side of Monument to the other feel way less like a vast, deadly ocean of pavement. If you can’t remember how awful it was before the new improvements, walk up the block to Stuart Circle and attempt a south-to-north crossing. Beware! It’s not for the faint of heart (or the slow of foot)!

As for car safety, speeds will probably be slower as the entrances and exits of the circle have been narrowed. Missing, for now, are the lane designation arrows (seen in one of the images below). These are pretty critical to keep cars in the exterior lanes from bashing into those in the interior lanes. I contacted Sharon North at the Department of Public Works and she assured me the arrows are still part of the plan and will be painted on the road soon enough. Patience, roundabout users! Patience!

Today, the city is set to begin work on converting the headscratching circular traffic situation at Monument and Allen (aka the Robert E. Lee monument) into a roundabout. “But! But!,” I hear you sputter, “That intersection already has a roundabout. I know because I like to speed my vehicle around it like Tom Cruise in Days of Thunder.” Well, my speed-loving friend, I’m about to disappoint you in many ways.

But first, here’s the current intersection and the two major things that are wrong with it highlighted in pink: 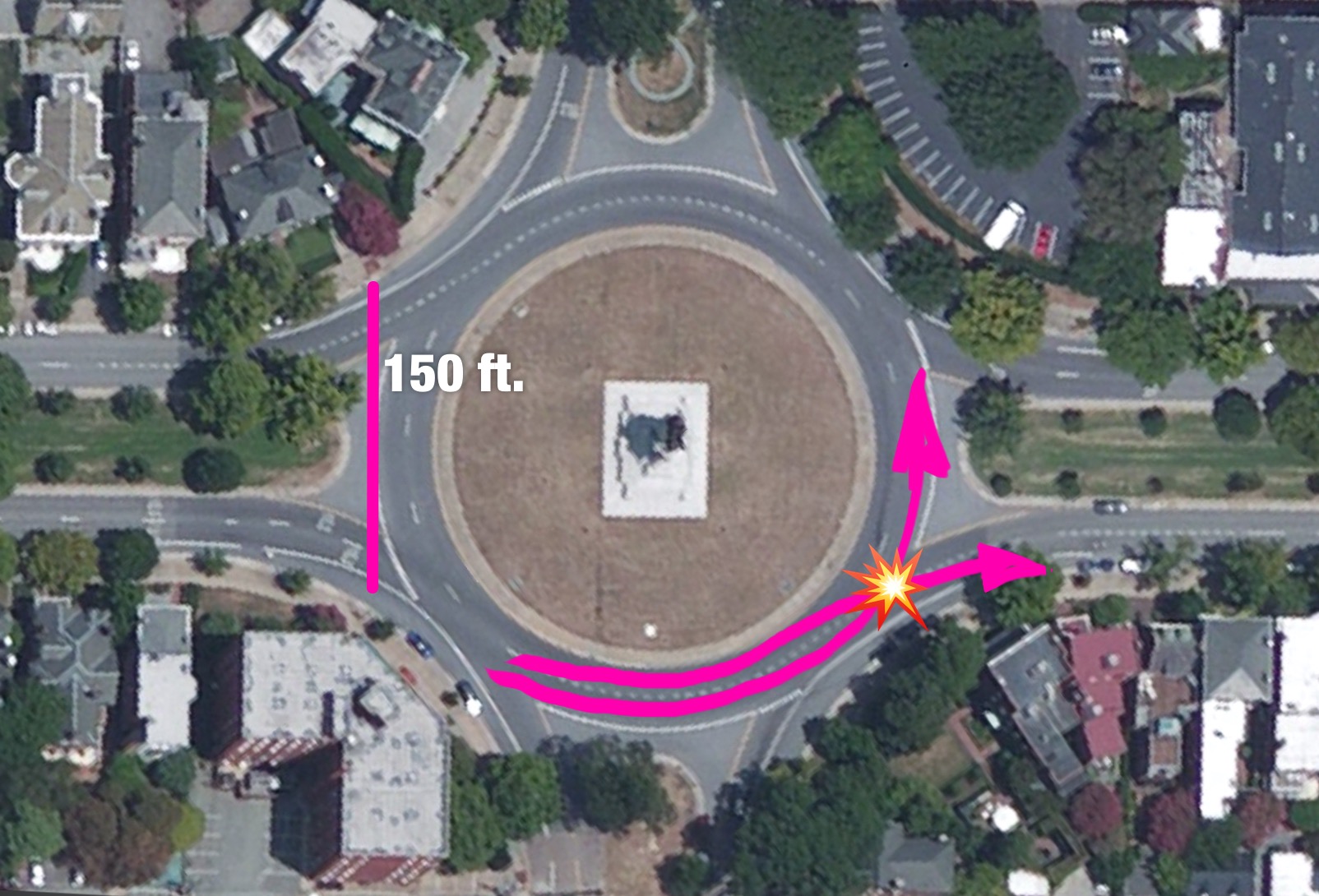 First–and most egregious–once you get inside the circle, the outside lane can continue around and around forever while the interior lane can still exit at will. This makes no sense! See the little explosion emoji up there? THAT COULD BE YOU.

Second, it’s an extremely long stretch of pavement to cross (150 feet) if you’re a pedestrian that’s not trying to (or unable to) walk across raised medians, grass, and dog poop.

The city’s plan for this intersection helps with both of these problems by converting what’s now a traffic circle (or rotary), into what will be a more proper roundabout. 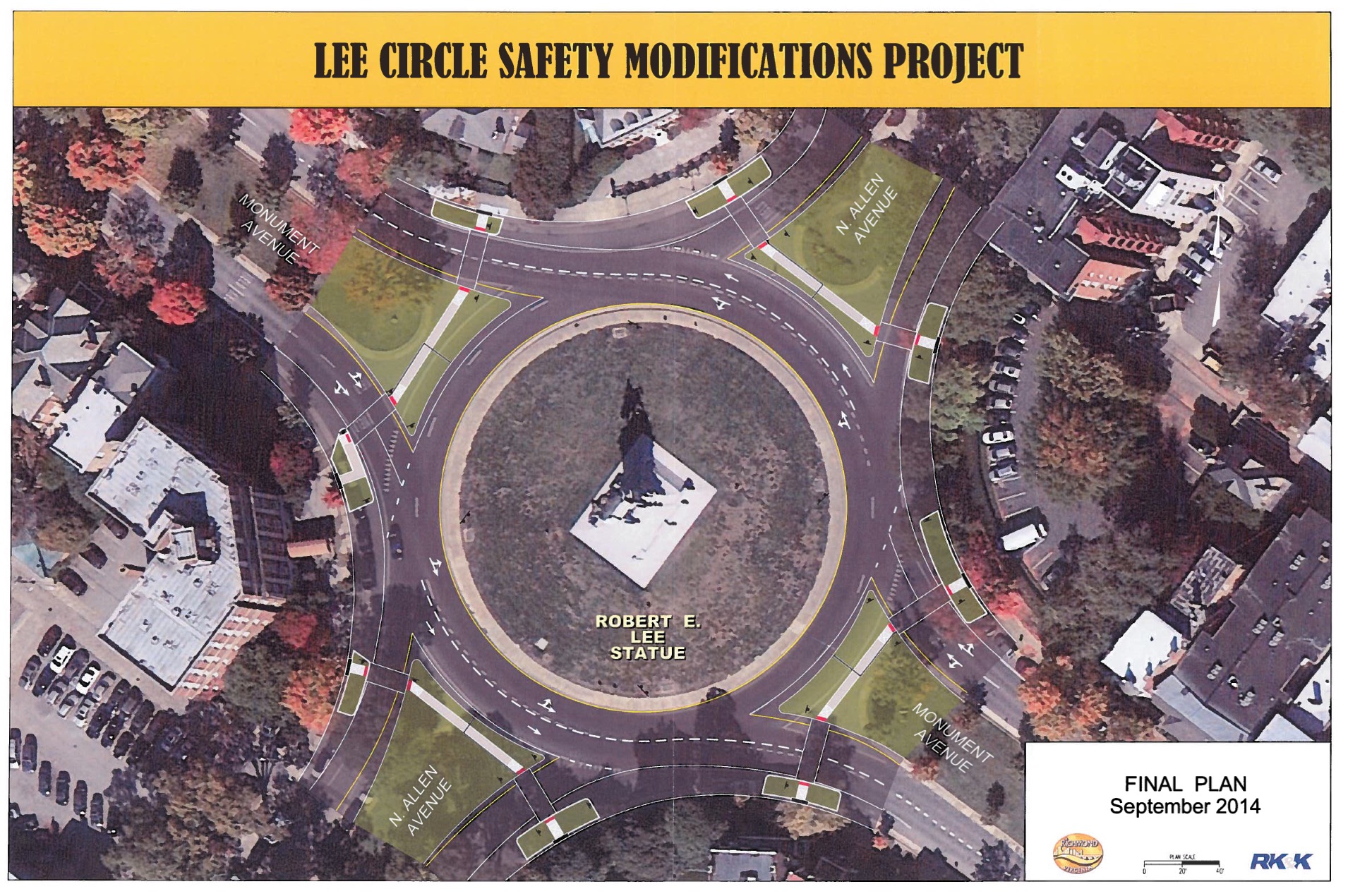 So you can see, the outside lane is only used for taking a right or continuing straight through the intersection. The totally bananas option to continue around the monument from the outside lane no longer exists.

Plus they’ve massively extended the center median on Monument Avenue and added a million (eight) pedestrian-friendly “corner islands1.” The combination of new medians and the corner islands breaks up the amount of street a pedestrian needs to cross. No longer must you run for your life across 150 feet of pavement unshielded from oncoming traffic–just two lanes before you reach the serene safety of the median or a corner island2.

In addition to making the physical act of crossing the street easier and safer, these things should reduce speeds in the intersection–which, dang, y’all, are pretty high due to the Denny Hamlin effect of the existing circle. Slower vehicles make a safer intersection for all–pedestrians, bikers, and motorists alike.

And, in case you were worried about them, “all existing cobblestone blocks in the street surface impacted by the construction work at the median and corner island extensions will be salvaged and stored for future use.”

If you want to learn more–including how they’ll deal with drainage, which material will be used for the ADA compliant curb ramps, or how much liriope they will plant at the intersection (1,650 “plugs”)–look no futher than this application for Urban Design Committee review (PDF).