The new app, likely the first of its kind, was created by three Richmonders. Outdoorsy, a locally-designed iOS app, makes it easier for people to hike, bike, run, ski, and surf with others.

“Outdoorsy is a social networking app that connects people,” said Casey Werderman, who along with Matt Klaman and Shane Zilinskas, co-created the app. “It’s kind of like a ‘meet-up’ taken down to an individual.”

Users create an outdoor-related event or activity and choose whether to invite friends or the public to participate. Users also choose the level of intensity, later color coded with either green (low), yellow, or red. “It’s all user-based, so we don’t input any sort of data or information,” Werderman said. In addition to creating events, users may also look up existing events and activities close to them, as well as discuss them with other users. Werderman believes Outdoorsy is the first app of its kind.

The trio created the app over eight months while working their full-time jobs. “We did almost two months of beta testing with about 50 people in Richmond,” Werderman said. “We’re really, really appreciative of all the feedback people have given us.”

Outdoorsy premiered in the App Store on September 18th, the same day that iOS 7 was released. “We’ve been in the app store just over three weeks,” Werderman said. “The response has been incredible. It’s kind of taken on a life of its own.”

As of last week, roughly 500 people in Richmond have downloaded the app. “Our benchmark of success is not downloads, it’s actual usage,” Werderman said. Outdoorsy creators have kept discussions of the app Richmond-based because they’ll soon roll-out iOS 7-specific changes to the app as well as added features that will add more social aspects in coming weeks. After the updates, the creators will push national awareness of the app.

Werderman said he’s grateful that the app was conceived, developed, and tested in Richmond, a city both tech and outdoor-savvy. “Richmond is really the perfect test market, because if it works here it works anywhere.” 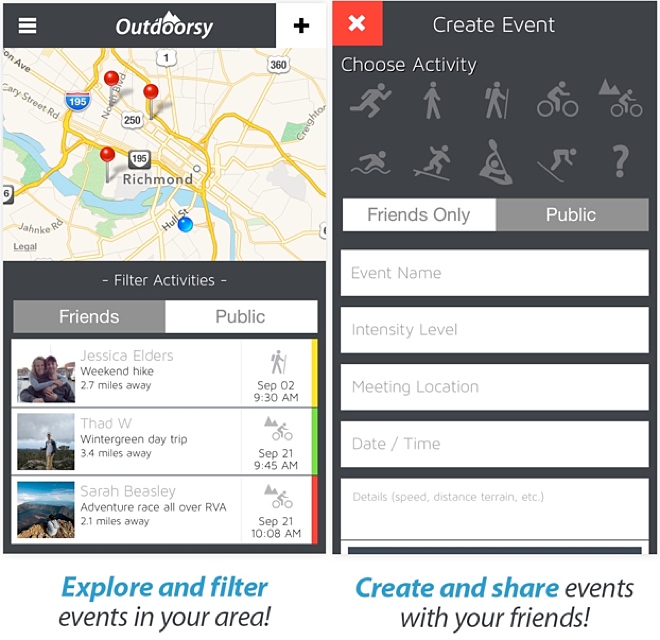 photos and images courtesy of Outdoorsy