Early risers were treated this morning to a rocket launch three years in the making.

Early this morning NASA launched a rocket carrying inflatable heat-shield technology from the Wallops Flight Facility in Wallops Island, Virginia. The launch is the third suborbital test flight NASA has conducted as part of the agency’s Game Changing Technology Program. 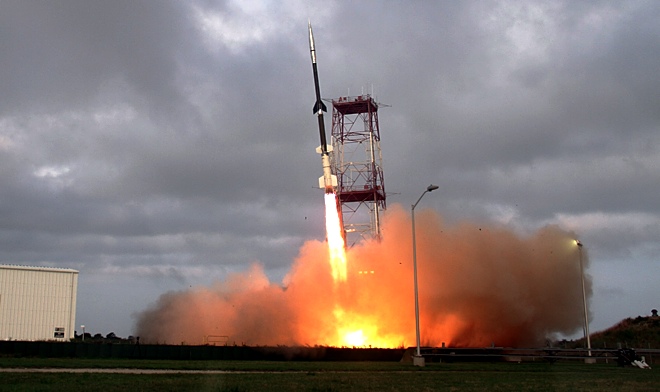 This morning’s Inflatable Reentry Vehicle Experiment (IRVE-3) will allow NASA to study an inflatable heat shield that, in theory, will allow equipment to survive re-entry into the Earth’s atmosphere. Engineers have been developing the test for the last three years.

“We have to do all kinds of different testing,” said flight systems engineer Carrie Rhoades on NASA’s website. “We do high temperature tunnel tests in a number of facilities to check out all different types of thermal protection system materials. For IRVE-3 we know what should work, but for future missions we want to go bigger to carry larger payloads, so we’ve got to keep testing and trying out different materials.”

The rocket carrying the IRVE-3 is expected to land in the Atlantic about 100 miles east of Cape Hatteras, North Carolina. In March, NASA launched five suborbital rockets from Wallops Island to measure high-speed winds 60 miles above the Earth’s surface.