Elixr gets a big update

Elixr, an app that allows users to post and share drinks they’re imbibing, as well as rate and recommend them (see below), has today been updated with new features, including a sleeker interface, to-do lists, a chronological journal of users’ previous drinks, and more.

“We started working on this update about five months ago,” said Jeff Rock, co-founder of Elixr as well as local software company Mobelux, developing partner for Elixr. “We knew that iOS 7 would provide an opportunity to rethink the interface, but when we started getting into it we realized that in order to mesh with new iOS themes and paradigms we really needed to start over.” 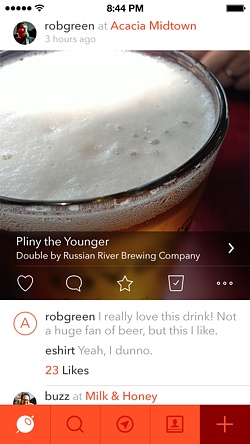 Rock co-founded Elixr with Marc LaFountain. “We were having a cocktail at Lemaire and he pitched the idea of a website that would allow you to find and discuss the greatest cocktails in the world,” Rock said. “I started thinking up ways to build something like that and after a few weeks of deliberation what we ended up with was a platform that used mobile crowdsourcing to help find the best drinks in the world.”

The new version of Elixr still allows users to post and rate drinks as well as discover drinks friends are having. In addition to a simplified interface, the new Elixr allows users to edit drink photos within the app (users can also check in without photos). Users can add drinks to a favorites lists, as well as to a to-do list. The Nearby feature now provides an easy way to scan local venues and read a brief summary of the local watering hole.

Here’s the feature on Bui:

Rock said that developers are already at work to bolster the recommendations feature of Elixr. We’re starting to get enough data in Elixr that we can start figuring out really creative ways to serve awesome recommendations,” Rock said. “I can’t give too much away, but we’re really excited about what we’re working on.”

“The popularity of cocktails, spirits, beer, and wine is exploding around the world. So, we’re convinced that now is the time for a network focused on these experiences,” said Marc LaFountain, Elixr’s CEO.

Among the features of the app:

Mobelux was founded in Richmond in 2008. The company’s first iPhone app, Tumblrette, was acquired by Tumblr in 2009 and re-released as Tumblr’s official iPhone app. Most recently, the company created Carousel, an Instagram client for Mac, and released new apps for Instapaper.

“We’re incredibly proud to be creating Elixr in Richmond,” LaFountain said. “The talent pool and creative energy here are simply amazing. The bars, restaurants, wineries, and breweries in the region have been inspirations to us. We hope Elixr will be a positive reflection of the very special place where it’s been made.”