Shockoe Denim is the first store in town to offer handmade jeans for men and women–all made right before your eyes. For a family with a long list of fashion capitals as previous homes, Shockoe Denim’s Lupescos have a short answer to the inescapable inquiry, “Why RVA?”

On a return trip to Maryland from a family vacation several years ago, an exit ramp off I-95 changed the direction of a family with rich history. Among other places, Shockoe Denim’s CEO, Anthony Lupesco, has lived in Biella, Italy, the heart of the country’s famed textile industry; a small city in the South of France; and San Francisco, where he graduated from the Academy of Art. His mother, Brigitte, is French. His father, Pierre, was born in Romania but fled communist rule to Milan, Italy, where he developed a verve for clothes. Pierre later migrated to the U.S., becoming a major player in the Made in Italy movement of the 1970s that exported to the world houses like Armani, Fendi, Missoni, and Versace.

This well-traveled trio spent a random afternoon exploring Richmond’s Shockoe Design District and fell for RVA charm. Soon the family moved here and began exploring business opportunities, eventually opening a men’s clothier in Shockoe Slip called If (which later closed). Shockoe Slip reminded them of Soho, where fashion is foremost. Pierre Lupesco tells me, “Richmond has an architecture that other cities around the world would die for.”

Starting today, the family will make their own bold contribution to the Richmond landscape, opening Shockoe Denim on 15th Street next to Frame Nation. Located steps from the fateful exit ramp, their store is the first in town to offer handmade jeans for men and women. The venture is a true local, family business. Their boutique combines the best of Richmond architecture with the clean look of a contemporary flagship in Soho (or Need Supply in Carytown)–boasting concrete floors, exposed brick, visible systems, large windows, and a sun-soaking skylight. 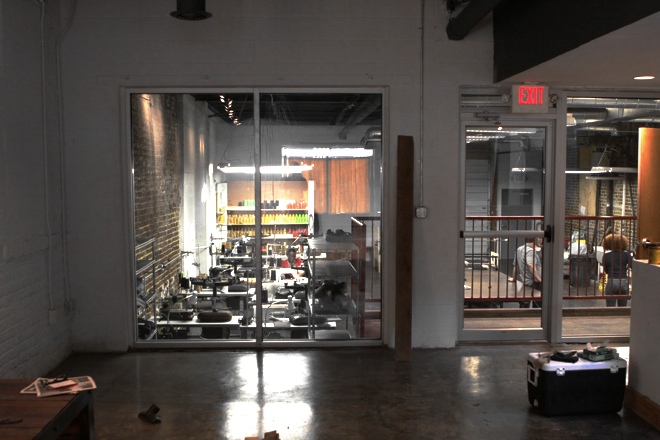 However, the slick interior design of the store is easy to overlook as your eyes and legs immediately move to the building’s back wall of two 60-square-foot windows. There you will discover the venture’s most striking feature: Shockoe’s upscale jeans are not just sold in a swanky store right here in RVA, they’re made in that same space.

“This building was a perfect platform to both house our display and showcase our process.”

The concept catapults to a whole new level the idea that consumers should educate themselves on the origin of goods. That wall of windows peers into a bustling backroom that answers each of the where, who, and how are the boutique’s clothes made. Apart from 3×1 Denim in New York and a few others, Anthony says that stores in the U.S. employing a similar set-up are rare.

On a recent visit to the location, Anthony walked me through the store’s space and down the back stairs to the other side of the viewing windows, where an apparel atelier buzzes with activity from pattern to finished product. The workshop teems with colorful thread rolls, overflowing drawers of snap varieties, piles of denim swatches, and racks of paper patterns. Production Manager Jordan Waldrop keeps the floor organized, and Anthony’s mother, Brigitte, was present that day to impart a touch of French elegance. VCU fashion design students Clara Hill and Faatima Muhammad measured, marked, cut, assembled, and sewed diligently despite my fascinated litany of questions and non-stop shutter. Pierre, wearing a prototype Shockoe Denim jean with criss-cross stitching in the inseam that he proudly defined as one of a kind, showed me his files of patterns the team labored through before arriving at their current cuts. 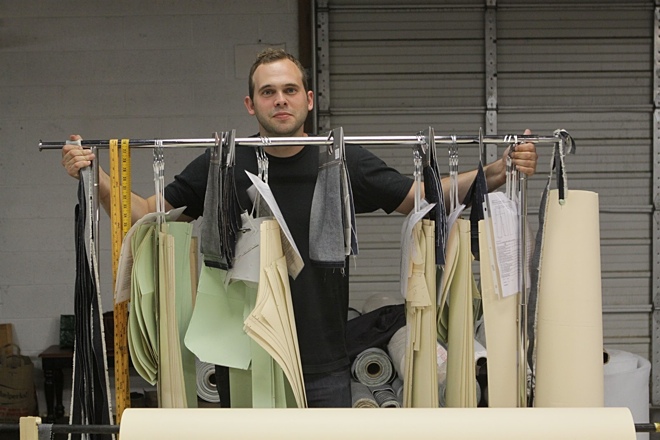 Developing the patterns was the team’s starting point. Pierre called on an old friend and master pattern maker for the store’s exclusive styles. Gianni Santagati, who knew Anthony as a boy in Italy, has developed jean patterns for, among others, Versace, Dolce & Gabbana, and Trussardi, elite clothiers whose jeans can retail for as much as $600 a pair. Santagati and the Shockoe team collaborated to develop a truly American set of patterns with a bit of European panache. Together they developed as a starting selection a straight leg, slim fit, and slim bootleg fit for women and a straight leg and slim cut for men.

In keeping with the old school swagger of the team, Shockoe buys all of it’s denim from America’s oldest working denim maker, Cone Denim in Greensboro, NC, which started production in 1895. Cone supplies denim to designers as divergent as Levi Strauss and True Religion. They were the first steady supplier to Levi’s and were recently chosen for the brand’s vintage collection, which fetch $325 a pair.

The quality of the denim coming out of Cone is indisputable, however you can tell in talking to Anthony that he’s not drawn to the mill because it’s a magnet for big names. Instead, he’s quick to geek out over the maker’s fly shuttle looms, artisanal methods, and tradition-laden history.

“Sourcing from Cone is consistent with our focus on craftmanship and old-school American-made quality. They manufacture not just the old way, but the better way.” 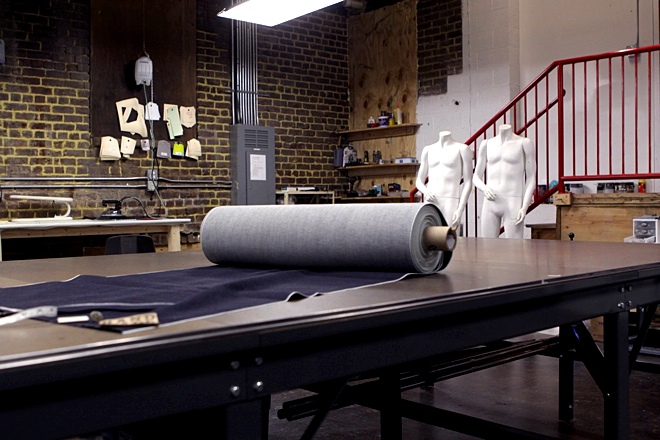 At the onset, Shockoe will focus for men on selvage, or “self-edge” denim. Characterized by their uncut outer edge, visible when cuffed, selvage is more durable than modern cloths and develops a unique patina over time. Though the cuffs on his jeans that day were an aficionado’s status symbol of sorts, Anthony is drawn to selvage for its time-tested heritage. The cloth requires turn of the century shuttle looms and considerably more fabric than other denim since the durable edges are part of the final cloth rather than cut piecemeal. It’s a production process that aggressively eschews modern methods and capitalist cost saving. Cone is the only maker of selvage in the United States.

In addition to selvage, Shockoe will initially offer men standard denim in two indigo shades and a black overdye. Women can pull off the rack any of the three cuts in standard denim, black overdye, and a super soft, stretchy fabric with a brown tint that’s made from 21% recycled beer bottles. Ready to wear jeans for men and women will range from $185 to $225 a pair.

For the difficult to fit, or those looking for personalized details, Shockoe Denim will also offer a custom option that will allow the customer to choose from a selection of denim cuts, threads and accessories, and then have the jeans fitted to their exact measurements and specifications. Pierre’s long history in luxury pant making makes him the point person for any pattern adjustment a customer may request.

Eventually, the team plans to develop a full collection of jackets, shirts, and other sportswear–all of course to be made in the back of their Shockoe store.

In addition to RVA’s architecture and energy, Anthony is drawn to the burgeoning culture of creators and craftsmen here. He talks with admiration of Hardywood Craft Brewery, Ledbury, Need Supply Co., and the many visual artists working in Richmond and his aspirations of potential partnerships with each. Anthony has already teamed with local artist Ed Trask on an inventive mural representation of the Shockoe Denim logo that envelops the front of the store. At only 27, Anthony is well positioned to contribute to the Capital City’s exciting creative class.

“There is a different feel and energy in Richmond over the past few years. My goal is to help accelerate what is happening here.” 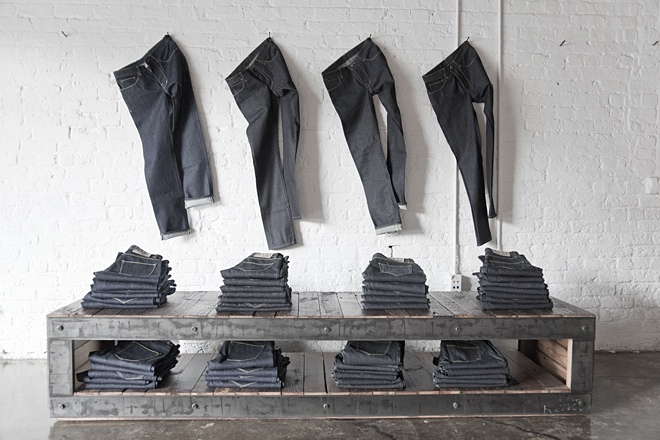