Over 20 routes will be altered for the city’s first transportation center. The big step is likely the first of several to come. Richmond will have its first transfer plaza for public transportation when the GRTC opens a temporary one on April 20th, affecting 21 routes within the GRTC system.

“It’s a completely new concept in Richmond,” said David Green, CEO of GRTC. “There’s never been a transfer plaza, or a transfer center, related to public transportation in Richmond.”

The new plaza will make it easier for riders to transfer between buses by creating 13 curbside bus bays along 9th Street between Marshall and Leigh streets. Currently, the only way to transfer between buses is “to get off a bus on a street corner and then walk down another corner to another bus stop and wait for whatever the next bus that’s coming and getting on that,” Green said. Beginning Sunday, the 21 routes affected “are going to converge at this one, central location.” 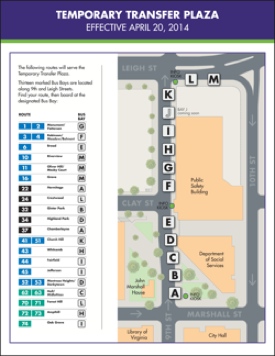 Since last September, GRTC–which carries roughly nine million riders each year–has worked to minimally alter those 21 routes to serve the transfer plaza. “It’s not just where the routes go, it’s the times that each bus on each route stops, and making sure they come together at the same time,” Green said. “It was an enormous undertaking. It’s been the number one, most important project we’ve been working on.” GRTC estimates that 5,000 to 8,000 riders will use the transfer plaza daily, and that the plaza will accommodate 90 buses per peak hour.

Green cautioned that the 21 routes haven’t been overhauled. “The entire routes were not redesigned. It was just the portion of the routes that go through the core downtown area. So there are definitely changes to 21 routes, but not all of them resulted in significant changes.”

The GRTC has searched for a location to build a permanent transfer center for several years. Green said GRTC requires at least one acre of land to construct such a center, which must also be “strategically situated” where routes operate. “We just can’t put it anywhere. Operationally, it has to make sense,” Green said. Otherwise miles could be added to the system, which would burden riders and increase fuel use. Finding a location that matches GRTC’s criteria has thus far proved insurmountable.

But despite the challenges in creating a permanent transfer center, Green’s optimistic GRTC will make one in coming years. “Ultimately, we still intend to do that, and we hope to be successful within the next, possibly, two to three years,” he said. The temporary plaza that opens Sunday will serve as a stopgap until a permanent plaza exists.

Despite making route changes available online ahead of the transfer plaza’s opening, as well as providing advanced notice to riders of changing routes via fliers, Green admits the change will take getting used to. “There probably will be a lot of questions and some confusion, so we are planning to have employees out there at the plaza during the first week of operation just to help riders navigate the plaza and to help answer their questions…” he said.

A major forward step for GRTC, the new temporary transfer plaza is just one piece of the plan to improve transportation in Richmond. “I’m thinking that within the next five years we’ll have bus rapid transit as part of our system,” Green said.

He also hopes a permanent transfer center will service that bus rapid transit, as well as bike-sharing opportunities, among other options. “We want to make it more of a multi-modal center,” he said.