A refugee at age three, Manyang Reath Kher lived in war-torn Sudan for thirteen years. He’s now studying law at UR, just helped Beyoncé make a music video, and is close to winning $100,000 in an award show airing on VH1. At age three Manyang Reath Kher had no family. His father was dead and he was separated from his mother and sister in Akobo, a town in southern Sudan. For the next thirteen years, Manyang lived as a refugee, walking from camp to camp across the African country near its border with Ethopia. “I’ve seen a lot of things…that are really hard to tell.”

Manyang became one of about 20,000 boys who were displaced and orphaned during the Second Sudanese Civil War between 1983-2005. They are known as the “Lost Boys of the Sudan.”

“The reason they are called lost boys is because they lost everything,” said Manyang. With little food and the rampant perils of a destitute, war-torn countryside, Manyang roamed the region along with other refugees. He described the years he spent traveling as walking “to nowhere.”

While in a refugee camp as a young teen, Manyang was bitten by a cobra. Well-aware of the effects a cobra bite had on its victims, the family with whom he was staying at the time decided on an unusual approach to removing the poison: electrocution. Electrified wires were placed near the snakebite in an attempt to prevent death from the snake’s venom. “They were thinking the poison would go away,” said Manyang.

While snakebites are not uncommon in Sudan, the method used to treat Manyang earned him wide attention. “People read about what happened,” said Manyang. His story brought the attention of Commonwealth Catholic Charities, who helped to bring Manyang to the US.

“I was really scared,” said Manyang about the lack of opportunity he foresaw in the foreign country. He was also determined to relocate his mother and family, which he thought required him to remain in Africa.1 However, he decided to come to Virginia in December 2005. “It was one of the harder things to do.” 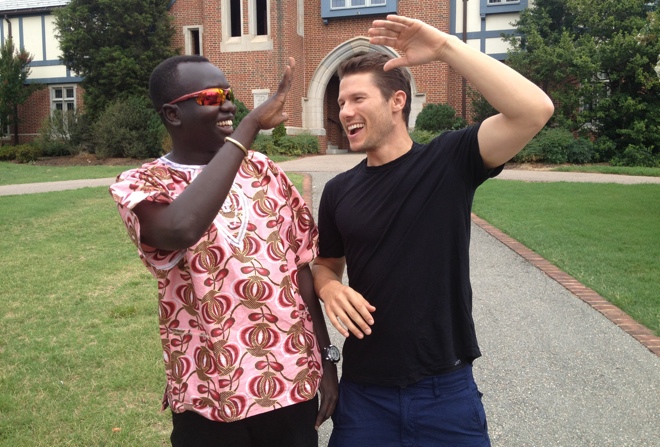 Since arriving, he has lived at the Virginia Home for Boys and Girls for the last six years, learned English, and enrolled at the University of Richmond. “I want to become an international lawyer” focusing on humanitarian law, he said. He’s not waiting for a law degree before helping his native country.

Manyang helped create the Humanity Helping Sudan Project (HHSP), which aims to reinvigorate his home region of Africa by providing resources to the many who have been displaced just as he was. His goals are simple: “Teach how to farm, how to fish, raise chickens. To give them a trade school.”

The lack of education and vital resources like supplies and programs in vocational training hinder progress in the region. For example, Manyang says one acre of properly farmed soil can feed 2,000 people. All that’s needed are the basic tools and knowledge of how to cultivate indigenous crops.

With the help of sponsors like Whole Foods Market and Allegro Coffee, HHSP leased over 100,000 square feet of land for a community garden in Sudan. Locals have installed an irrigation system that uses repaired wells and the Baro River. The work that Manyang and HHSP are doing in Sudan is now garnering attention here in the US.

Some time ago, a friend encouraged Manyang to apply to the Do Something Awards, an annual award ceremony that recognizes and honors the work of “world-changers” under the age of 25. “I didn’t know anything about them,” said Manyang. He reluctantly applied and is now one of five finalists competing for a $100,000 grand prize that will be announced on August 21st at 9:00 PM on VH1.

As a finalist, Manyang was in New York City last weekend to meet Beyoncé and take part in filming the singer’s latest music video. Another highlight of his trip was meeting CNN’s Anderson Cooper. “I never knew all these things could happen. It was a big surprise for me.”

Both a panel of judges and public votes will determine if Manyang and his organization will win the $100,000 grand prize (he has secured at least $10,000 as a finalist in the competition). Even if he doesn’t win the grand prize, HHSP will receive national attention and significant financial support. “I feel great. I feel happy.” Above all, he wants to use the spotlight to improve the quality of life for Sudanese refugees. “I believe in human dignity.”