First Freedom Center celebrates all (and no) religions

The Virginia Statute of Religious Freedom gets its very own tribute museum on the site of its signing in 1786. Here’s the facts. Here’s what you need to know:

This statute, penned by TJ, called for a separation between church and state in a very groundbreaking way, and was the basis for the First Amendment. It’s one of three achievements that Jefferson wanted to be remembered for (and listed on his tombstone at Monticello)–along with founding UVA and writing the Declaration of Independence. It contains inspiring quotes such as:

Be it enacted by the General Assembly, that no man shall be compelled to frequent or support any religious worship, place, or ministry whatsoever, nor shall be enforced, restrained, molested, or burthened in his body or goods, nor shall otherwise suffer on account of his religious opinions or belief; but that all men shall be free to profess, and by argument to maintain, their opinion in matters of religion, and that the same shall in no wise diminish, enlarge, or affect their civil capacities.

It was signed in 1786 across from Siné 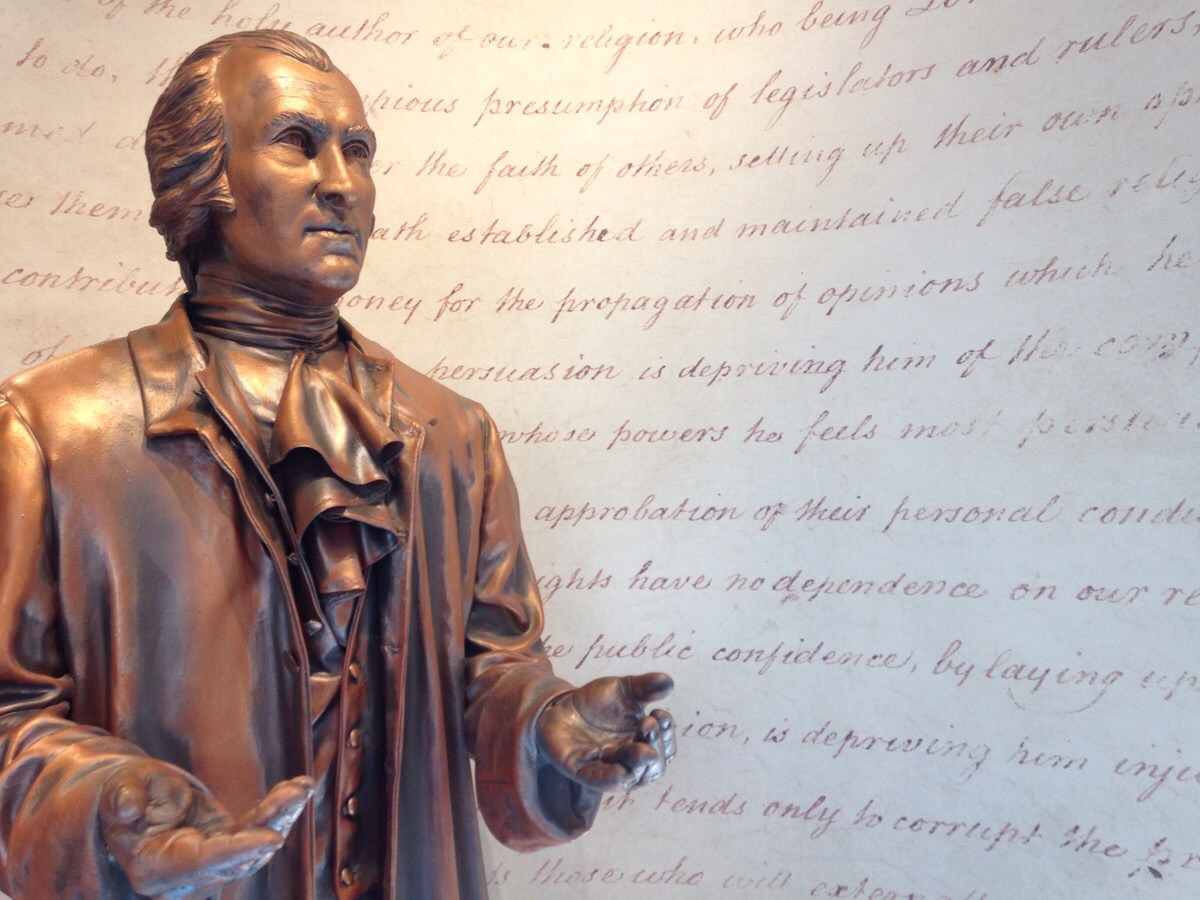 James Madison, who was not bronze in real life.

That is, the General Assembly signed off on it at their meeting space on 14th and Cary in Shockoe Slip. The spot has since tumbled in prominence from gas station to parking lot. I have no data on whether or not there was an Irish pub called Siné across the street 230 years ago. That was a joke.

We now have a little museum to honor that achievement

Yes, it abuts a Marriott, which caused some frustration among loud Richmonders. But listen, it used to be a parking lot. Ever tried to bring a bus-full of fourth graders on a field trip to a parking lot and tell them this was the spot of a wonderful moment in American history and then sit them down to eat their brown bag lunches between two SUVs? Me neither, except in my nightmares.

Founded more than three decades ago, the First Freedom Center has celebrated the Virginia Statute for Religious Freedom by providing educational opportunities, sponsoring debates and public forums, and handing out First Freedom Awards to people who have gone above and beyond to further the cause of religious freedom. What a cool job!

They’ve teamed up with the Valentine 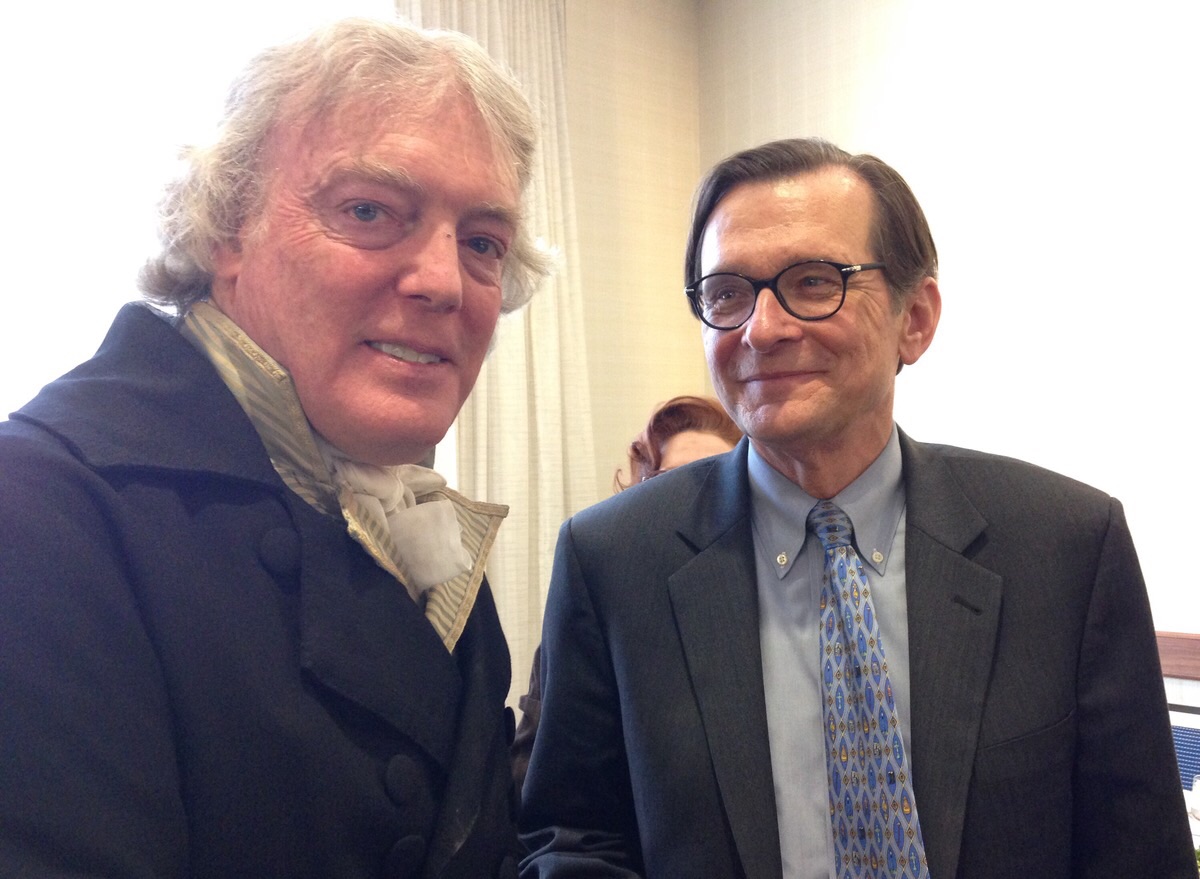 The space is worth a visit 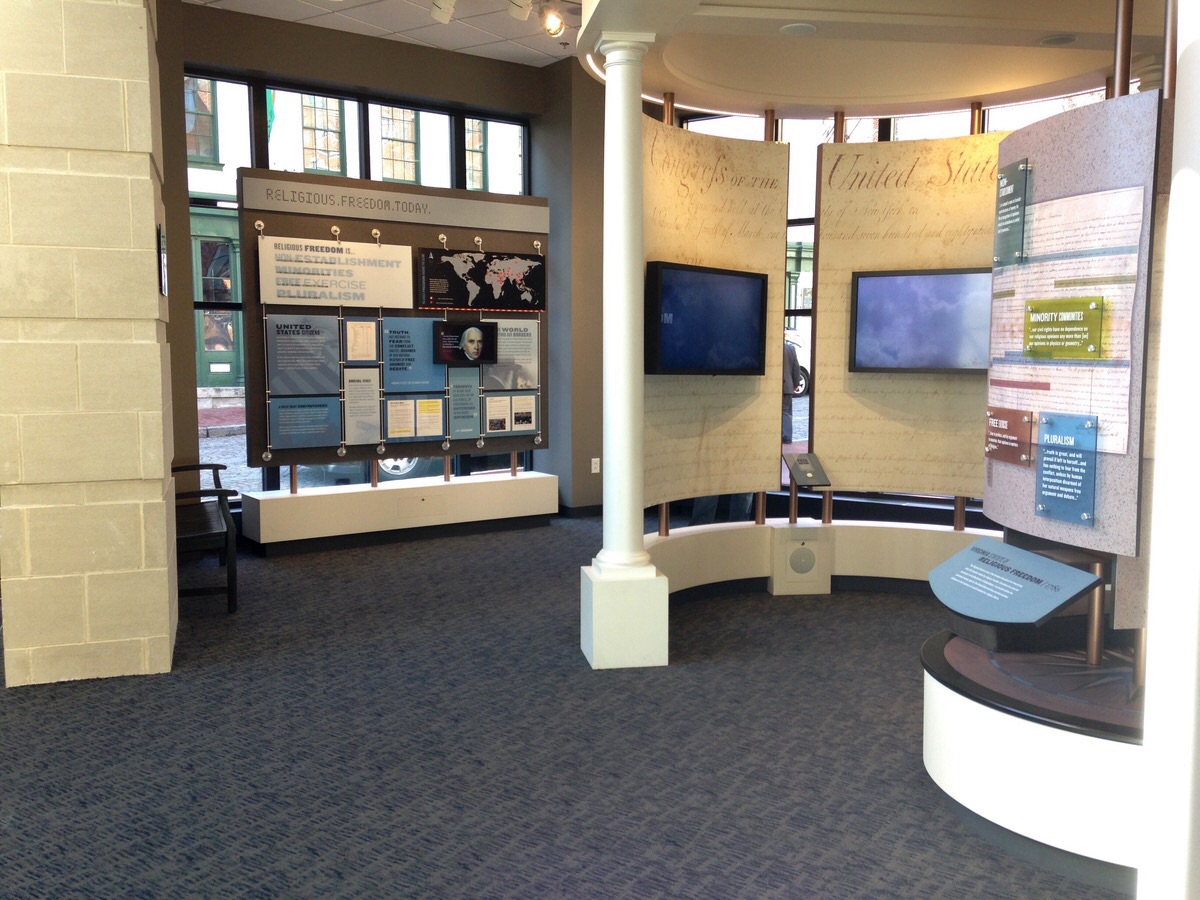 Statues of Jefferson and Madison, videos, and lots of information to remind you why we got into this America situation in the first place.

Many people said things at the commemoration ceremony

“Thomas Jefferson” kicked it off, before Chairman of the Board of Trustees Ben Howerton quoted the Statute, recognized the bajillions of prominent Virginia politicians there, and proclaimed that this has been the most important work he personally has ever done. The mayor introduced Governor McAuliffe, who linked the Statute’s aims to his own–namely, extending freedoms to those who don’t have it currently. Religious leaders from around town (Rabbi Yossel Kranz, The Very Rev. Phoebe Roaf, Dr. Imad Damaj, Ms. Priti Gosar-Patil, and Rev. Alane Cameron Miles) gave one-minute invocations, followed by the national anthem.