Now the question is: will construction be completed in time for this year’s Folk Festival? Venture Richmond, organizers the Richmond Folk Festival, has cleared the final bureaucratic hurdle and may now build a natural amphitheater on the grounds of Tredegar Green (see below) following a 6-2 approval yesterday by the City’s Planning Commission.

But natural amphitheater plans caused protests from nearby residents and those who believed that the venue would affect future use of the adjacent Kanawha Canal. After the Planning Commission, which only has authority over the City property involved in the project, delayed their decision in January (see below), Venture Richmond resubmitted plans for a new amphitheater project–spanning between Tredegar and S. 2nd streets–that wouldn’t infringe upon the canal towpath on the City-owned property and would also block festivals from operating on city property north of the towpath’s brick wall. 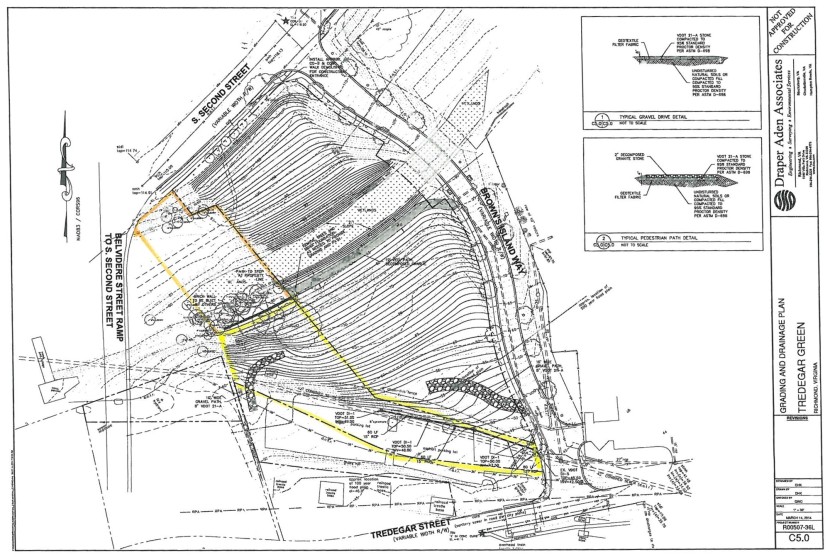 The area highlighted in orange is City-owned property that has been removed from the plan.

“We just thought, let’s resolve the issue that seems to be a problem,” said Venture Richmond Executive Director Jack Berry to the Richmond Times-Dispatch. “Let’s see if we can get 90 percent of what we want approved so that we can move forward.”

Berry said that amphitheater construction will likely begin in May. It’s unknown if the project will be completed in time for the 2014 Richmond Folk Festival. The annual festival is typically held in October.

Venture Richmond’s plans to build a natural amphitheater (see below) hit a snag last Tuesday when the Richmond Planning Commission delayed their final decision on the proposal, causing anxiety for Venture Richmond as it faces a ticking clock to have the amphitheater built in time for the 2014 Richmond Folk Festival.

The commission delayed its decision for 45 days because of concerns over who would pay for future amphitheater modifications should the Kanawha Canal (which is currently dry and unkept) be refilled and how the future amphitheater would affect the navigatability of a refilled canal.

The delay came as a surprise to Venture Richmond and its executive director, Jack Berry. The group is working to get the new facility up and running in time for the popular music event and its 200,000 attendees in October.

Berry said Venture Richmond does not have a contingency plan for hosting the main stage of the Folk Festival if the proposed amphitheater is not ready.

“Our timetable is already very compressed, and it will make it very difficult for us to have the site ready for the 10th anniversary of the festival in October,” Berry said. “I never imagined that we would be in this position, so we don’t have a Plan B yet.”

The Richmond Planning Commission yesterday endorsed Venture Richmond’s amphitheater project near the James River and Kanawha Canal (see below) by a vote of 7-0.

But before the project is approved, the final project design must go before the Urban Design Committee, whose members neither recommend nor rejected Venture Richmond’s plans two weeks ago due to a deadlocked vote. If the final design is approved, it will go before the Planning Commission once again.

Next week, Venture Richmond plans to apply for a permit from the U.S. Army Corps of Engineers to fill some of the wetlands near the canal.

Is this the last year of the Folk Festival?

Hard to say for sure. Beginning next year, organizers of the annual festival, Venture Richmond, may not have a suitable venue to host the Folk Festival, which brought over 200,000 people downtown last year.

Why can’t they keep using the same spot?

The festival’s largest stage (the Altria Stage) was on land owned by NewMarket Corp. NewMarket gave Venture Richmond permission to use their property for the last eight years, but the two parties agreed that it was time for the Folk Festival to have its own location.

NewMarket donated a nearly 4.3-acre parcel to Venture Richmond (which gave some of that land to the City) that’s adjacent to the current Folk Festival location to help ensure the festival continues. The land slopes from the top of the hill at 2nd Street (near the Virginia War Memorial) down to Tredegar Street. The grounds are bisected by remnants of the Kanawha Canal (more on that later).

Hooray! What’re the plans for the new stage?

It would technically be an amphitheater for performances (PDF), and Venture Richmond wouldn’t install a permanent stage, just refurbish the area to make it more hospitable to events and large crowds. 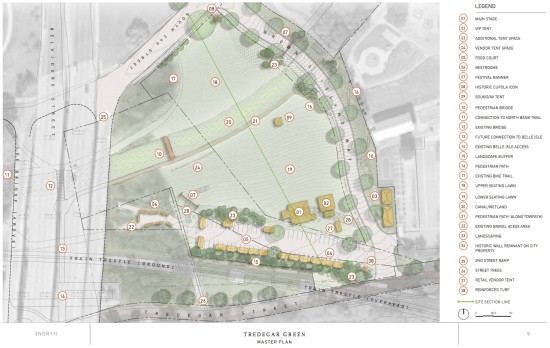 “We would like to make it a beautiful, park-like setting,” said Lisa Sims, the deputy director at Venture Richmond, about the proposed modifications.

If it’s built, visitors could watch a performance and also get nice views of the James and the downtown skyline. The site renovations will also include a bike trail on the north bank at the Lee Bridge.

In addition, the plans calls for a restoration of the canal that “takes it back to the period in time when the canal was navigable,” Sims said. The refurbished canal would allow for small boat traffic once water is piped in and recirculated,1 although Venture Richmond doesn’t have it in their budget to do that. But it could be done by the City (or someone else) at a later date.

Supporters of Venture Richmond’s plan include the City’s Department of Planning and Development Review and the City Historic Preservation Officer. Venture Richmond would like to get the process underway by early 2014.

That sounds awesome! What’s the problem?

As with most parts of downtown Richmond, there’s a question of historical preservation. The Kanawha Canal, which bisects the parcel of land, was surveyed and planned by George Washington.

In order to build the amphitheater site, workers will alter the north and south banks of the canal by cutting and filling parts of each bank to create a smoother slope. As you can imagine, not everyone is excited about the plans to alter something that directly connects Richmond to George Washington.

Local lawyer John W. Pearsall III–who served on the Historic Richmond Foundation committee that recommended restoring the 200-year-old canal back in 1988–is chief among them.

Here’s an excerpt from a report (PDF) by the City’s Department of Planning and Development Review:

The cutting of the north bank and removal of timber retaining walls will be necessary to reshape the upper level of the amphitheater. A limited amount of fill will be added to create a more gradual slope on the south bank of the canal.

Doing this will improve spectator’s line of sight, improve the aesthetics of long-neglected parts of the canal area, as well as make the grounds more manageable for maintenance.

Pearsall doesn’t think there needs to be any cutting or filling on the site at all (even if it is a small amount), and thinks it can be avoided if designers simply raise the movable main stage to improve the line of sight of visitors. He’s also concerned about the elevation above sea level required to accommodate the canal once it’s filled with water to allow boats, if it ever is.

Are there other concerns?

Some Oregon Hill residents are understandably worried about the noise and increased traffic near their homes should the project happen. For their part, Venture Richmond has reached out to neighborhood advocates and civic leaders to discuss those concerns, which Sims said would continue if the project goes forward.

What do you mean ‘if’ it goes forward?

Earlier this month, the Urban Design Committee deadlocked 4-4 over the plans. While the decision doesn’t kill the project outright, it does mean that the committee has no formal recommendation for the City’s Planning Commission.

On Monday, September 16th at 1:00 PM at City Hall, the Planning Commission will host a public meeting to consider and decide whether the amphitheater project can go forward. If the commission approves the plan, it will continue on its current course of city, state, and federal review. If the commission doesn’t approve the plan, it seems the Folk Festival may not happen, at least not in 2014.

Are you serious? No Folk Festival next year?

“It is a definite uncertainty,” Sims said, adding that she cannot say for sure if Venture Richmond could secure another venue. But they may not want to, because the goal of Venture Richmond is to bring people downtown, something the Folk Festival is excellent at. It wouldn’t be the Folk Festival if it took place in, say, the Meadow Event Park, where the Virginia State Fair takes place.

Some have suggested that Venture Richmond simply move the two tented Folk Festival stages on Brown’s Island to the site of the proposed amphitheater, then they could move the main stage to Brown’s Island. But the tents need a relatively flat surface, and the gradient on the hill of the proposed project is too sizable, so that wouldn’t work.

Where can I get more information?

Venture Richmond offers their take on things here, local company 3 North has their proposed renderings (PDF) of the new amphitheater. You can also read the Department of Planning and Development Review report and recommendation here (PDF), an historical assessment (PDF) by Dutton + Associates, and report (PDF) endorsing Venture Richmond’s plan by the City Historic Preservation Officer.

There are 36 reader comments. Read them.