An unusual number of high profile ordinances–including “urban chickens”, pay for police/firefighters, changes to the water/sewer rates, and the appeal of a Commission of Architectural Review ruling–made for an interesting evening at City Council this week. The agenda for Monday’s City Council meeting (PDF) was mostly mundane items like appointments to various commissions and committees, but an unusual number of high profile ordinances–including “urban chickens”, pay for police/firefighters, changes to the water/sewer rates, and the appeal of a Commission of Architectural Review ruling–promised an interesting evening.

Before we got into the agenda items, however, April was named as Richmond Child Abuse Prevention Month and also Richmond Facial Hair Appreciation Month. Seriously.

The John Marshall Boys Varsity Basketball Team was recognized for going 21-7 this year and making it to the Group AAA State Championship game.

The myriad budget-related items on the agenda were presented as a public hearing. The budget ordinances were all CONTINUED TO APRIL 22 and will not be voted upon until May.

There was an epic public comment period for the budget items. In general: a lot of people support the police and firefighters, and there are folks who have issues with the proposed water/sewer rates.

CONTINUED TO APRIL 22: Ordinance 2013-60 would approve a step-based pay system for police officers and fire fighters originally approved in 2006 but then put on hold. Passage does not give immediate raises, but it does implement a regular set of pay increases for a group of folk who have not had a pay increase since 2008.

CONTINUED TO APRIL 22: Perhaps the highest profile of the budget ordinances are 2013-51 and 2013-62, which together would change the way that water bills are calculated. Changes include lowering the monthly base rate for water and waste water (by about half) and related service charges, coupled with charging more for the volume of water used for each. There are also increased rates per volume of water used during Voluntary Conservation periods (usually during summer drought conditions). If passed, the new water & sewer base rate for the city would be $26.11, down from $49.40–which would be still above the current $17.10 in Henrico County 1 (though the county has proposed their own increase). 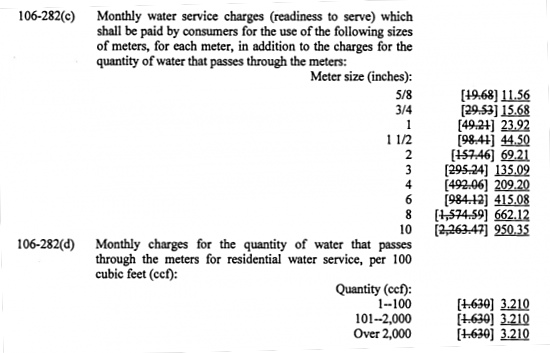 WITHDRAWN: 2012-232, which bascially says that the police can impound your bicycle, moped, or scooter if you lock it to a city-owned tree or sign for more than 72 hours or if it is a hazard. The focus of the ordinance was to be abandoned or “dead bikes“; no word on why it was withdrawn (for an update on this, check the comment below by Councilman Agelasto — Ed).

PASSED: 2013-12 makes it a violation to parallel park more than 18 inches from the curb. This is the most liberal allowance in the state: Norfolk is 6 inches. If you violate this law, you will be fined $20.

PASSED: 2013-47 makes it legal to keep up to four female chickens,2 with a few restrictions and a $60 annual permit. Fan District Association President Roger Whitfield was one of two who spoke against the ordinance, but there were at least 15 speakers in favor including a number of Fan residents. Stated at fact (AGAINST): there will be cock fights. Stated at fact (FOR): a dog poops more in one day than 10 chickens.

Review of the Commission of Architectural Review 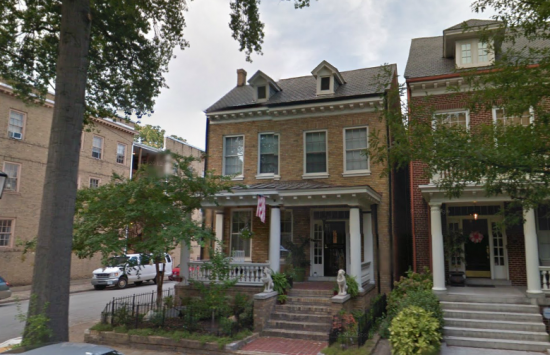 CONTINUED TO APRIL 22: 2013-r47 would reverse the decision of the Commission of Architectural Review (CAR) which denied a certificate of appropriateness for vinyl replacement windows on a home located at 2916 Monument Avenue.

Because the house is located in the Monument Avenue Old and Historic District, a Certificate of Appropriateness is required when any proposed work alters the exterior appearance of the property (PDF) as it is viewed from a public street or alley. The certificates are supposed to be obtained before any work is done, and there is a review process. The vinyl windows were installed at this house without approval by CAR, which then refused to issue the certificate of appropriateness.