Bicycle and moped owners! Do NOT lock your bikes and mopeds to city-owned trees! A look at the legislation passed by City Council last night. The agenda for the Monday April 22 City Council meeting (PDF) was, as usual, a lengthy list of the mundane and otherwise. 23 of the 56 different ordinances and resolutions on the agenda were budget-related items, all of which were en masse continued to a Special Council Meeting on Monday, May 6th. The bulk of the evening’s energy was spent considering an ordinance regarding attaching bicycles to public signs and trees.

After recognizing various individuals and groups, the meeting kicked off with the general Citizen Comment Period. To paraphrase the individual speakers: 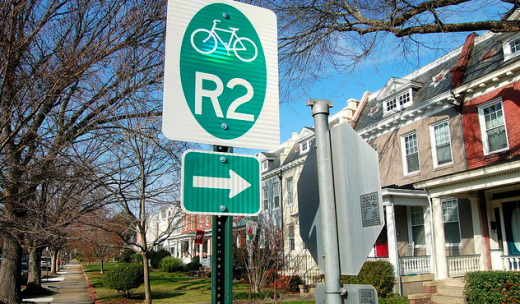 Before getting to the agenda, City Council and Mayor Jones recognized May as Bicycle Month in Richmond, the 3rd week in May as Bicycle to Work Week, and May 17th as Bike to Work Day. Council went on to consider a number of two-wheel-related ordinances:

The most controversial of the night’s agenda items was the ordinance concerning removal of bicycles from city-owned bicycles and trees:

There’s been some confusion about the language of the below bicycle-related ordinance. Please note that locking your bicycle or moped to a post, sign, or other property (excluding trees) on City-owned property is acceptable for 10 days (or 72 hours if your bike or moped is inoperable).

You may still lock your bike and moped to a post, sign, or other property (excluding trees) on City-owned property.

Per Councilman Agelasto: these ordinances are out of concern for the trees, is not intended to be anti-bicycle, and VCU has a similar program already in place. Speakers expressed concern with the idea of having bikes impounded, saying that it is normal use to lock bicycles to posts for time periods longer than 72 hours. Speakers also voiced concerns about about the definition of a “dead bike”, given that this could trigger an impoundment after 3 days.

Councilman Chris Hilbert and Charles Samuels were both supportive of Agelasto’s ordinance; several council members seemed have reservations following the public speakers. Ellen Robertson spoke for the need to educate the public about the ordinance. It seemed as if this was on the way to being continued or even withdrawn, until speeches by Samuels and Jakob Helmboldt put the ordinance back on track. Richmond’s Bicycle, Pedestrian, and Trails Coordinator Jakob Helmboldt said that he had no concerns about the ordinance–that it merely clarified items already in place, removing vagueness from the lawbooks. Four of the nine councilmembers voted against the ordinance (Graziano, Baliles, Robertson, and Trammel).

PASSED Ord. No. 2013-84 makes it unlawful to attach a motorcycle or moped to a tree on City-owned property, and also makes it unlawful to attach a moped to a tree, post, sign or other property on City-owned property for more than 10 days (or more than 72 hours for inoperable mopeds). Police officers are now authorized to impound any such illegally parked motorcycles or illegally attached mopeds.

PASSED Ord. No. 2013-85 removes registration requirements for bicycles and the authority to impound bicycles not properly registered.

PASSED Res. No. 2013-R104 encourage citizens of the City of Richmond to register their bicycles with the National Bike Registry. 48% of stolen bicycles are recovered each year, but only 5% make it back to their rightful owners.

PASSED Ord. No. 2013-78 authorizes the acquisition of 611 Goddin Street for the purpose of establishing a new public park to be named Historic Fulton Memorial Park. Fulton is perhaps Richmond’s most grievous example of “urban renewal”, in which one of the city’s oldest neighborhoods was erased from the map.

PASSED Ord. No. 2013-88 authorizes the special use of 1415 Chamberlayne Parkway for multifamily residential and student housing uses, to authorize additional signage, upon certain terms and conditions.

PASSED Ord. No. 2013-73 authorized the special use of the property known as 1700 Summit Avenue for the purpose up to 42 multifamily dwelling units and uses permitted in the B-7 Mixed-Use Business District, upon certain terms and conditions.

PASSED Ord. No. 2013-74 authorizes the special use of the property known as 8 and 10 North Robinson Street for the purpose of authorizing the existing buildings for office, retail, and personal service uses, upon certain terms and conditions.

PASSED Ord. No. 2013-75 authorizes the special use of the property known as 310 North 33rd Street to additionally authorize principal commercial uses permitted on corner lots in the R-63 Multifamily Urban Residential District on the property, upon certain terms and conditions. Word has it that another outpost of the Urban Farmhouse will be going into the spot.

PASSED Ord. No. 2013-79 authorizes the Chief Administrative Officer to accept funds in the amount of $723,226 from the Virginia Department of Housing and Community Development and to appropriate the increase to the Fiscal Year 2012-2013 Special Fund Budget by increasing estimated revenues and the amount appropriated to the Department of Economic and Community Development by $723,226 for the purpose of the acquisition, rehabilitation and sale of foreclosed properties through the Neighborhood Stabilization Program.

PASSED Ord. No. 2013-39 To authorize the Chief Administrative Officer to execute a Contract for Loan Guarantee Assistance, a Note and other documents necessary to accomplish the transaction contemplated thereby, all relating to the City’s receipt of up to $9,875,000 in Section 108 Loan Program funds, for the purpose of capitalizing a business loan pool as part of the Economic Development Revolving Loan Program.

PASSED Ord. No. 2013-82 To amend Ord. No. 2012-54-69, adopted May 14, 2012, which adopted a General Fund Budget for Fiscal Year 2012-2013 and made appropriations pursuant thereto, to transfer funds in the amount of $203,000.00 from the Department of Economic and Community Development agency and to appropriate $153,000.00 to the Non- Departmental agency, Economic Development Consortium line item for a grant to Venture Richmond and $50,000.00 to the Non-Departmental agency, Arts Consortium line item for a grant to CultureWorks, for the purpose of revitalizing the Broad Street corridor and improving the Arts and Cultural District.

PASSED Res. No. 2013-R103 approves an expenditure in the amount of $1,334.46 pay the Department of Information Technology for the printing and mailing of newsletters to Second District.

PASSED Ord. No. 2013-84 says that you can’t get a business license if you have any delinquent business license, real estate, personal property, meals, transient occupancy, severance and admissions taxes.

PASSED Res. No. 2013-R98 adopts the City of Richmond’s Emergency Operations Plan in accordance with the Commonwealth of Virginia Emergency Services and Disaster Laws of 2000.