In the afternoon on Thursday, February 6th not long after City Council sent out the press release below, Rob Jones of Loving RVA released his own statement and a copy of the petition.

The Loving RVA effort was launched to educate residents in Richmond on the benefits of the Revitalize RVA Plan, which include new jobs and increased tax revenue for the City. At no time has anyone involved in this effort been told to suggest that they are representing members of Richmond City Council or collecting petition signatures on behalf of City Council. There are a number of individuals and groups in RVA who are very excited about this plan and its many benefits, and we welcome their participation and enthusiasm in talking to their family, friends, neighbors and colleagues about the Revitalize RVA Plan. 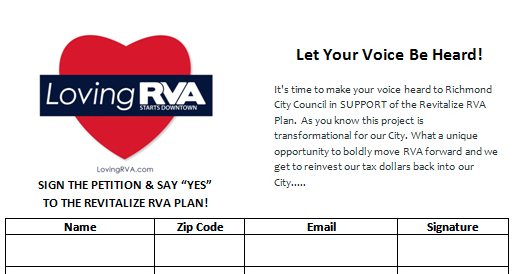 Reports of petitioners going door to door looking for support for what they called Revitalize Richmond first popped up on the Facebook group No Stadium in Shockoe. Claims were made that it wasn’t clear that the petition referred to the Shockoe Revitalization plan until the petitioner pointed the resident to the Loving RVA website. Whether the petitioner was intentionally misleading has not been proven but it has raised enough eyebrows downtown for City Council to issue the following statement.

City Council regarding the baseball/Shockoe issue

WHAT: (Richmond, Virginia U.S.A.) – The Members of Richmond City Council have become aware of individuals being paid to go door to door in Richmond neighborhoods to solicit signatures of support for the Mayor’s proposed Revitalize RVA baseball stadium in Shockoe Bottom.