Monday was a neat night for a City Council: almost all of the streetlights were out through the Fan down to City Hall, and there were two BIG items on the agenda: the Riverfront Plan and “The Redskins Deal.” Monday was a neat night for a City Council: almost all of the streetlights were out through the Fan down to City Hall, and there were two BIG items on the agenda (PDF): the Riverfront Plan and “The Redskins Deal.” 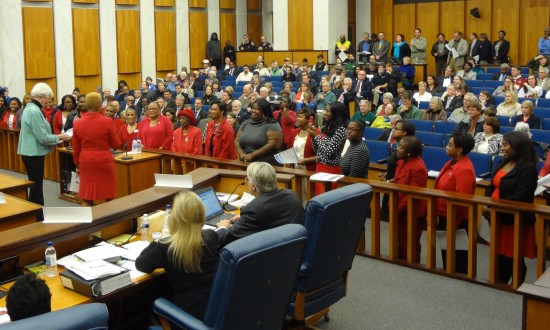 The CONSENT AGENDA portion of the agenda passed unanimously.

To accommodate the demand and the crowd that came out for the high-profile ordinances, the big ordinances on the REGULAR AGENDA were moved up to the front of the line.

First up was Ordinance 2012-202. A number of folks, including Leighton Powell of Scenic Virginia, Amy Swartz from the Historic Richmond Foundation, and Adrienne Kotula with the James River Association all spoke in favor of the plan; there was no opposition. Given the lead-up, this was ultimately anticlimactic.

Simply put, The Redskins Deal is complex. At its core, a training facility will be built on Leigh Street in the corridor behind the Science Museum. Bon Secours is a part of this: they will put in money, will taking over the vacant school building at 5800 Patterson Avenue, and will expand their presence in the East End. The city puts in money and…?

Given the complexity of the deal, it was only fitting that The Redskins Deal was considered in several pieces.

STEP ONE: Ordinance 2012-213, which conveys the former school at 5800 Patterson Avenue to the city. A number of individual citizens spoke in opposition to the deal, though there did not seem to be an organized opposition. Memorably, Chris Dorsey spoke against, calling this transfer “theft of tax payer dollars,” with much to say against St. Mary’s Hospital as neighbors (including their helicopters), and calls City Council “criminal in nature”.

STEP TWO: Resolution 2012-R151, an amendment to the deal, which brings more money for the schools. According to Councilman Hilbert, the new deal squeezes another $4.5 million out of Bon Secours to go to the public schools in the city, the rent on the Patterson Avenue property gets bumped up to $33,000 year, Bon Secours will pay for the relocation of the “tot lot” on Patterson Avenue to somewhere nearby, and they will assist in a neighborhood beautification program for the Patterson-Libbie business district.

A number of individuals spoke against (many had beards), with most saying that that they feel that this will not be helpful to the city and that the process is moving too quickly. Kim Gray (2nd District School Board), said that “I do not believe this is just compensation for Richmond City Schools.” Chris Dorsey spoke again, saying “You can’t garnish a turd sandwich and tell people that it’s something good to eat.” Speakers in favor were supportive in their belief that the deal will bring economic development and tourism to Richmond (and some people really love the Redskins).

STEP THREE: Resolution 2012-214, proposed the conveyance of 5800 Patterson Avenue to the Economic Development Authority of the City of Richmond for purposes of development. Speakers against: 1) did not like that our government is spending money related to sports; 2) wanted to ensure that the historic school building is preserved; 3) did not feel that enough information has been considered; 4) feared that the football players will impregnate local women & create problems at Shockoe Bottom clubs; 5) Glen Sturtevant (incoming 1st District School Board) was concerned by the lack of transparency and wanted to slow the process down and have sufficient time to ensure that we are doing this the right way; and 6) were against crony capitalism. People speaking in favor, again, supported this as a move towards economic development and tourism, and as something that will raise Richmond’s profile.

These were considered in three votes. City Council voted unanimously in support of all three.

The Rest of the Meeting Was Too Late for Me

There were a number of other items on the rest of the agenda, but by the time Council got to them, it was pushing 9:30 PM (meeting started at 6 PM!) and I had to head out.