Coming after years of contention, the City is set to publicly unveil a Richmond first. City officials were on hand two weeks ago to debut Richmond’s first public skate park, located within Carter Jones Park (see below). The skate park is a culmination of efforts undertaken by nearby residents, skateboarders, and City officials (see bottommost post). 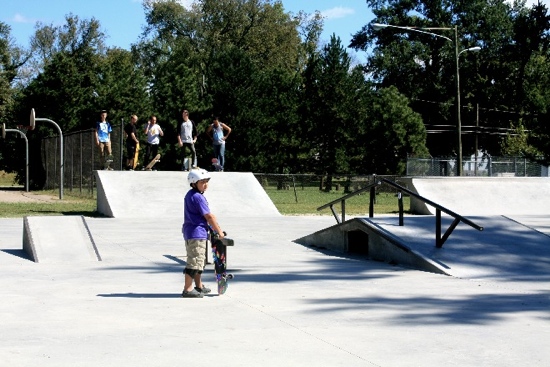 The City will have a ribbon-cutting ceremony this Saturday at Carter Jones Park to unveil the city’s first public skateboard park (see below).

“It’s great to see it actually happen,” said Bernie McGrew, who helped steer his fellow skateboarders in working with neighbors and City officials to install the skatepark. He said people like Kenny Shafer and Adrien Meyers were also vital to the process. “I think it’s great for the community.”

“We are extremely pleased to be opening the city’s first public skateboard facility,” said Dr. Norman C. Merrifield, director of the Department of Parks, Recreation and Community Facilities. “This exceptional community facility provides skateboarders in the city with an appropriate public space to enjoy their sport,” said Dr. Merrifield.

According the City, the Carter Jones skate park is the only one in a 16-mile radius.

In February Dr. Norman Merrifield, the director of Richmond Parks, Recreation, and Community Facilities, approved a slab of concrete to be installed at Fonticello Park. The slab, sanctioned by a city official after the idea had been touted by members of the public, would provide a designated skating area in the park away from nearby residents. He expected the concrete within 60-90 days. His comments came five months ago in mid-February.

“Nothing has been done over there,” said Johnson Foster, a local organizer who has worked with residents, skaters, and the City to create a skate area in the park.

In the months prior to Dr. Merrifield’s comments, select residents of Fonticello Park (also known as Carter Jones Park) grew embittered over an uptick in skater presence, which residents felt added noise and trash to the park. The City closed down the area that skaters used, claiming that materials on site were unsafe. Johnston Foster stepped-in and helped forge a relationship between residents and skaters that ultimately led to the February meeting in which the head of Parks & Rec approved the plan to build a more remote skatepark within the park. Residents got their peace and quiet; skaters got a place to skate.

However, in the months since, Foster said that his near-weekly conversations with Parks & Rec about the project have featured a litany of bureaucratic excuses revolving around contracting bids, permits, and permissions. “It’s gone on and on and on like that,” said Foster. “What started out a positive soon fizzled out.” Christy Everson, spokeswoman for Parks & Rec, said she couldn’t speak to the delay, but said that a contractor has been selected. “We are expecting to start work in ten days or so.” Even if the concrete does pour within the next two weeks, there are additional hurdles for Foster and supporters of the skatepark.

After championing for the concrete initiative, Foster began working with the Friends of Fonticello Park, a board of community members entrusted with financial resources to steward the park. 1 Existing funds for Fonticello Park were held by a non-profit agency of the City, The Enrichmond Foundation. Some time ago, Foster contacted the foundation to learn how Friends of Fonticello could obtain these funds to help pay for skatepark costs. Only a round of phone tag has resulted.

Foster and his family will soon leave the city for unrelated personal issues. He regrets not having a skatepark installed before leaving the area. However, he’s tapped someone to take the reins of leadership, Kenny Shafter. He’s also helped lead the development of blueprints and budgets to help expedite the building of a skatepark. “I’m trying to be positive about it,” said Foster, who said he would like to visit Richmond one day and see that skatepark. Unfortunately, he said “the city has done nothing…but lead us on.” One hopes that changes in ten days or so.

The Richmond Parks, Recreation, and Community Facilities department has decided to allow a makeshift skateboarding spot in Fonticello Park to remain open. The city will also further look into plans to pave and fence in a concrete slab in a more remote area of the park for skaters to use. The announcement was made at a public meeting last night.

The spot, which currently rests upon seldom used tennis courts on 28th Street, annoyed some residents near and around the park due to increased car traffic, noise, litter, and some instances of public urination. Parks & Rec had oscillated between allowing and not allowing the materials and skateboarders to remain over the last several months. The latest round of discussion and objection came last week when Parks & Rec posted a sign that materials at the makeshift skate spot would be removed.

Last night’s meeting at the Round House in Byrd Park was organized by Parks & Rec, which was represented by the new director of the department, Dr. Norman Merrifield and others, as well as residents who live near Fonticello Park and skateboarders who use the site. Approximately sixty people were in attendance.

“This is about us moving forward,” said Johnston Foster, who recently took it upon himself to help the skaters and residents to reach a compromise. “There is a need and demand for a more skate-friendly city.”

Johnston and residents presented Parks & Rec with a proposal that they had finalized earlier this week that called for an extension from the city to allow materials on the tennis courts in Fonticello Park to remain while the city and residents pursue a long-term solution. It also asked for the Friends of Fonticello Park, a subsidiary and community-led organization of Parks & Rec and Enrichmond, to take on new members to help oversee the finances and organization of Fonticello. “The neighborhoods and Parks & Rec should come together,” said Johnston, who felt that a lack of organization worked to the community’s detriment.

The residents who spoke at the meeting affirmed that they are not opposed to a skating presence in the park, but felt the location of the makeshift area was too close too existing homes. Some also asked that the city unlock the bathrooms in the park, or provide portable toilets, which they felt would alleviate the public urination issues. Others called for increased signage to provide clear rules and regulations for all visitors. One skater called for older skaters to supervise others in park and dissuade them from misbehavior, an idea that was followed by a round of applause from many of the meeting attendees.

Foster and residents made public the discussions that he and Parks & Rec officials had last Friday. This namely consisted of converting a razed playground location farther away from residents into a pad of concrete to which skaters could relocate themselves and their equipment. Concrete is a quieter surface material for skateboarding and, in conjunction with a more remote location within the park, should greatly reduce noise levels during activity. Residents noticed city officials measuring open space within Fonticello on Wednesday afternoon, which some took as an early indication that the city was going to build a structure for skateboarding, or was at least considering doing so.

After listening to the public, Dr. Merrifield, largely agreed with the proposal put forth by Foster et al, saying he view it as a “good solution.” He said that, while not confirmed, he anticipates that within 60 – 90 days a paved area within a more secluded location in Fonticello could be built. During this time he said that the existing spot could remain open (“We are OK with the existing structures being safe enough,” he said). He also stated that within 10 – 14 days improved signage and locks could be added to the park. He agreed that improved coordination among Fonticello residents and the city would go a long way to improve the situation for both homeowners and skaters.

In Fall 2011, current Vice President of Friends of Fonticello Park, Jen Britt, said that she wanted to transfer responsibilities to new people. Britt was on hand at last night’s meeting and spoke with Foster about transferring responsibility, as well as discussing the available funds associated with Friends of Fonticello Park, which Britt estimates to be about $7,000.

“I came in expecting a good outcome,” said Foster after the meeting. “I didn’t expect it to go this well.” He said the that the next steps will be to formally convene Friends of Fonticello Park with new membership and continue to speak with Parks & Rec officials about constructing a skate-friendly space within the park, especially one that can be further customized and built upon in the coming months and years. “They’ve been doing their homework,” said Foster about the city. “We want to do this right.”