The American Cancer Society celebrated life with the Cure By Design Fashion Show Friday night at the Jefferson Hotel. Models for the show were cancer survivors of both sexes, different races, and a variety of ages, exemplifying the Cancer Society’s goal of showing the diversity of survivorship. 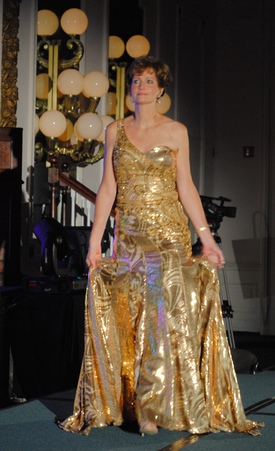 The American Cancer Society celebrated life with the Cure By Design Fashion Show Friday night at the Jefferson Hotel. Models for the show were cancer survivors of both sexes, different races, and a variety of ages, exemplifying the Cancer Society’s goal of showing the diversity of survivorship. Designers included Montoya (a Richmonder), New York-based Alex Garfield, and “Project Runway” finalist Jonathan Kayne.

Kayne was inspired to design for the show by his family experiences with cancer. He lost his stepfather, grandfather, favorite aunt to the disease and was with his mother through a full mastectomy. With his dresses he sought to “empower these women and show them the way I feel they show themselves,” and to show the “power and beauty” they exude. Part of this goal included helping the women to see those traits for themselves.

“When you look as gorgeous and statuesque as you do in that dress…no one is looking at your bust,” he assured one of his models who had yet to have reconstructive surgery after her mastectomy. “You look radiating and magnetic.” 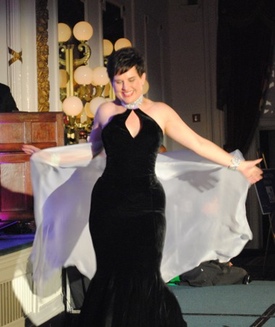 Friday was a day of pampering. The models had hair and makeup done and lunch before the show. “It’s your day to shine!” was emblazoned on a white board in the room where the primping was done. Before hair and makeup, models did the final walk-through of rehearsal.

Each model had a story to tell, including Diane Foreman, who waited in line to rehearse in a Relay For Life shirt on the back of which was appropriately written “Happy birthday is a victory song.” At 49, Foreman is a two year breast cancer survivor who would “like to see women have mammograms and have them earlier.” An advocate of early detection she said, “A lot of people want to know and then they wait. Then it becomes stages later.”

Foreman’s cancer was both a stage zero and one. She credits her habit of regular mammograms starting at the age of 25 to its early detection. Foreman was first diagnosed with Fibrocystic Breast Disease which resulted in a series of benign water filled tumors before she was diagnosed with cancer six years later after finding a hard, non-water filled lump. She then underwent a full mastectomy that removed the cancer, but did not opt for reconstruction. “I was small breasted, so even as I look back at pictures it didn’t even look like I really had breasts,” she joked. “It wasn’t any kind of vanity thing at all.”

Jaylen Chavis was the youngest cancer survivor at 16 months and, as her mother Melvenia Chavis said, “deserves to be seen and heard too.” Jaylen was diagnosed with Blastic Lymphoma which caused a tumor to form in her stomach at three months old. The cancer was detected “at the last stage when it had already burst [in her stomach]” her mother explained. Along with the tumor, doctors also removed her right kidney. At first Chavis was told not to be afraid because the tumor probably was not cancerous. “Cancer runs in my family so I already knew, so I just prepared for the worse” Chavis said. However, Jaylen did not have many negative side effects from the chemo aside from hair loss and delayed walking due to tingling she experienced in her feet and hands because of medication.

At the opposite end of the spectrum is Lucille Roane the oldest of the models. Roane will have her 82nd birthday next month after having beat Breast Cancer six years ago. “I was a little devastated, but not to the point where I was frightened because so much research had been done over the years,” Roane said about her feelings after the diagnosis. “It never was to the point where anyone had to feel worried because I didn’t feel worried,” she said about her family’s experience with her illness. “I never stopped doing anything that I’ve ever done.” She asked the physician who removed her tumor, Dr. Polly Stevens, to be with her on Friday.

Along with the fashion show, Cure by Design featured a cocktail party and live and silent auctions benefiting the American Cancer Society. Notable guests included Miss Virginia US Brittany Gordon, First Lady of Virginia Maureen McDonnell, and Tim and Daphne Reid. Cure By Design is now in its fifth year. For more information visit curebydesign.org.