The business of death: Inside RVA’s oldest funeral home

Billups Funeral Home dates back to 1850. Here’s how business has changed since it opened, and why people don’t die in December. Barden remains a live wire despite working the funeral home for over 60 years and speaking with an electrolarynx.

“It’s strange to say, I like working with dead people,” said the 83-year-old inside the funeral home one afternoon. Formally dressed in a tie and wool sports jacket, Barden clarifies why he enjoys his profession: not because it’s macabre, but because comforting the bereft fulfills him. “Most people appreciate what you did for them,” he said.

Billups itself has tended the dead and comforted people since it opened in 1850 (Barden joined nearly a century later). Between then and now, both the building and the business have evolved to keep up with the changing face of death.

From taboo to trailblazer

A death in the family is horrible enough–preparing and burying the corpse is often unbearable to a friend or relative of the deceased. So others would undertake whatever was needed to ready the body for proper burial. Lafayette Washington Billups was one of them.

In 1850, he opened L.W. Billups & Son Undertakers at 1506 E. Main Street. “In those days, everybody’s casket was wood,” Barden said. Billups had previous carpentry experience as a cabinet maker while living in Rosslyn, Virginia before moving south. “Little by little, he got out of the carpentry business and went into the funeral business only,” Barden said.

Billups died in 1893, transferring the business to his son, John. “By then [the business] was getting real busy,” Barden said. “So he decided to come up on The Hill.” John Billups reopened the business in Church Hill at 2500 E. Marshall Street in 1925, where it remains.

In those days, workers at Billups Funeral Home would travel to a city residence to retrieve bodies, embalm and prepare them, then they’d return the bodies1 to the residence so it could be shown to friends and relatives, often near a fireplace mantle. It was outright taboo to do otherwise. “You’d be a rat fink” if you didn’t, Barden said.

But Billups recognized when the taboo slowly dissipated, as it became more difficult for people to host a casket, say, in a small apartment several floors up. “If they lived up in a flat? No way José,” Barden said.

So in 1928, Billups expanded the building and created a large chapel where the funeral home would keep the body as well as host wakes and gatherings. While that’s common today, it was radical then. “They said, You’re crazy to spend all that money,” Barden said. The addition was also groundbreaking for another reason. “He had the first fully air conditioned funeral home in Virginia.”

Billups’s son, Charles, eventually took over the business, later passing it to his sons Morton and Stuart. Morton’s nephew and niece, Ruth Anne, later inherited the business. Barden joined the family business when he and Ruth Anne married. It was a line of work Barden had never seen himself doing.

Barden’s artistic abilities put him at the top of his seventh grade class. “I was always the hot shot,” he said. That was until a red-haired, freckled girl challenged his reputation. “It was an enemy taking my place.” That enemy was named Ruth Anne, and the two soon cast aside their adversarial demeanor to become friends.

They eventually married after Barden returned from fighting in the Pacific Theater of World War II. Ruth Anne’s father, Morton Billups, forbid his daughter from dating the returned war veteran, but the two defied him and married in North Carolina before moving to Daytona Beach, Florida. While in Florida, Ruth Anne became pregnant, and the young family returned to Richmond.

It was Ruth Anne’s mother that propositioned her jobless son-in-law about working in the funeral home. “I’ve never done that before,” Barden told her. His mother-in-law replied: “Most people don’t do that.”

Not only did Barden have to learn a new trade, he had to learn it under a skeptical, mistrustful father-in-law. Barden was berated for greeting customers with a perfunctory good afternoon (it’s never a good afternoon when a family member dies) or whistling on the job (don’t look happy, it just makes sad people sadder). Billups eventually took to the family business and grew to enjoy it. He and Ruth Anne would own it outright in 1993. 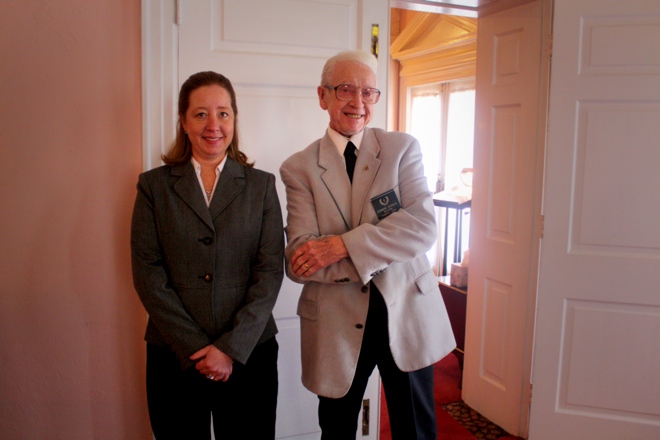 Barden and his daughter

One of the biggest changes he’s seen over the years is the amount of time bereaved family members spend inside the funeral home. It used to be that families with a deceased relative would arrive at Billups in the morning, spending three-to-four hours inside the funeral home–maybe once stepping out for lunch–as workers embalmed and prepared the body. The family would then stay until 9:00 or 10:00 PM to remain with the body.

The following day, family would return at 9:00 AM to receive additional family members as well as hold viewings and a wake. Funeral home employees would often stay until 9:00 PM, never thinking of leaving early or asking people to leave before they were ready. “You might be bored to death, but you would never do it,” Barden said. “Back then, it was the custom.” Nowadays, visitations are only a few hours one day, followed by a terse funeral the next.

One trend that’s been a constant is when people die. “You might say it’s seasonal, but not really” Barden said. But it kind of is.

Summer months aren’t as busy for the funeral home, because, as Barden said, people don’t get pneumonia in the summer. Another slow month for Billups is December. “Almost nobody dies in December,” he said. He can think of only two December corpses since he began working at Billups. Barden believes it’s because the Holidays keep people going. “That’s Christmas. Don’t you want to see your grandchildren one last time?”

When the dead finally do arrive, Barden’s noticed that an increasing number are cremated, compared to when he just started. “A lot of people like cremation,” he said, often because it’s cheaper than burial. While Billups doesn’t cremate on premises (it’s performed at City-owned crematoriums in one of two facilities on the east and west ends), he said other funeral homes have installed new crematoriums to keep business in-house.

Cremation may be a modern fad, one that the funeral home is happy to oblige, but Billups is much more about history. Located upstairs is a 5’4” Billups-built white wooden coffin from the early 1900s, originally made for a petite woman.

Movies and television depicting that era will sometimes show an undertaker measuring the deceased (or soon-to-be deceased). This is accurate, by-and-large, because coffins were priced based on the amount of materials used. Nowadays, most people fit into a standard-sized casket. However, Barden said the rise of obesity in America has created an increasing need for larger-sized caskets.

Across the hall from the retro coffin is the “ice box,” a wooden speciality casket from the 1800s. These caskets were designed and built to preserve bodies that weren’t embalmed, often because the service was sometimes unaffordable for surviving family.

The coffin and “ice box,” relics of both Richmond and funeral home history, will likely remain inside Billups for years to come. One of Richmond’s oldest continually-operated businesses, Billups will still be alive in the foreseeable future.

“We don’t die,” Barden said. “Somebody’s got to stay and run the place.” 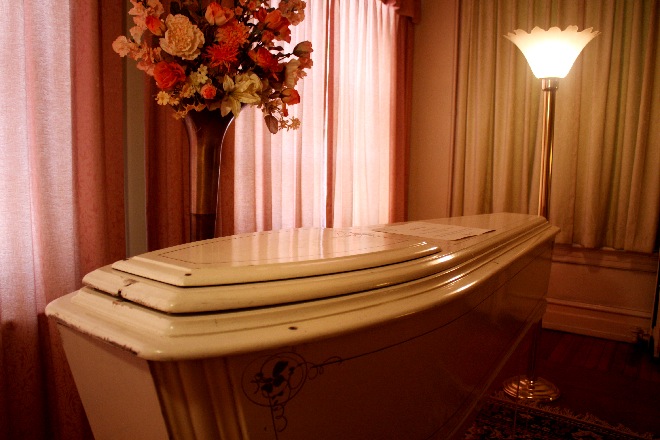 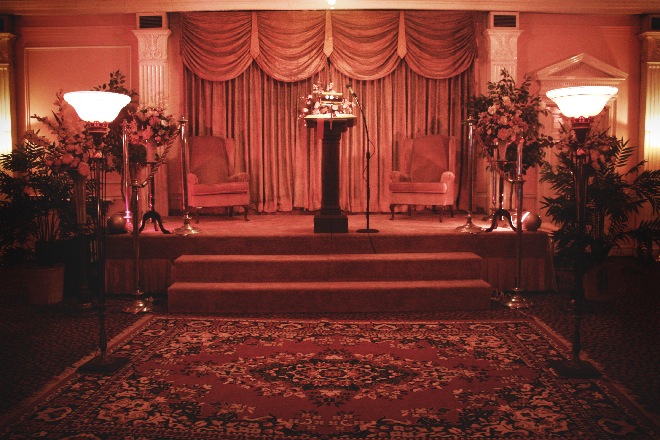