Functional with a bit of history to boot. Belle Isle receives thousands of visitor throughout the year and many of those arrive on bikes. Upon arriving on the isle these bikers have very few places to chain up their metal steeds.

Kirk Richardson is looking to fix that problem with a unique set of bike racks that also teach a little bit of the history of Belle Isle.

Four bike racks will make the series – one to represent each year the prison camp operated on Belle Isle (1862 to 1865). The first one will be a model of a Sibley tent, twelve feet tall and eighteen feet wide at the base (the same as the Memorial Bike Rack). Each bike rack after the first is successively more “broken” or “degraded” – 1863 has a full kink, 1864 is a mess, 1865 folds in on itself. In series, this illustrates the worsening conditions of the camp and of the prisoners. The final iteration is the most recognizable as a bike rack: the top center ring will have collapsed in to the point of being on the ground in the center of the wide base offering many places along its legs to secure a bike.

Each bike rack will have a unique sign describing the real conditions by a real prisoner of the camp for a particular year. Two additional signs – one at the Lee Bridge walkway overlook and one at the Bike Skills park – will explain the series and list sponsors.

Sibley tents were a common sight during the Civil War and the Union Army made nearly 44,000 of the tents. 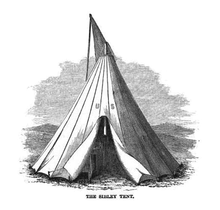 Currently Kirk is attempting to raise $25,000 to complete this project. Learn more about the project on IndieGoGo including pictures of his first attempt that vandal threw into the river.