Earlier this year, the Valentine Richmond History Center unveiled it’s A History of Richmond in 50 Objects exhibit, and now a piece from RVA’s best loved grocery chain joins the ranks.

“The people have spoken,” said David Voelkel, general collections curator at the Valentine by phone earlier this week. “The greatest number of votes came for Ukrops-related objects.”

It’s challenging to consolidate Richmond’s history into 50 items, which is exactly what David Voelkel was tasked to do earlier this year. “I tried to keep it balanced across the centuries,” Voelkel said. “That meant a lot of things fell off the list.” Among them were those related to Ukrop’s, one of Richmond’s oldest and best-known grocery stores. “It was a local business and it was something everybody used.”

Martin’s purchased Ukrop’s in 2010. “There was a lot of very public mourning for the loss of that business,” Voelkel said. He added that Ukrop’s closing is similar to the loss of other well-established businesses like Miller & Rhodes and Thalhimer department stores. “It’s now passed into legend and lore and memory.”

The object that will represent the former grocery chain is a Ukrop’s valued customer card, “One of those ephemera pieces that every Richmonder had but threw away,” Voelkel said.

The newly added card may be wallet-sized, but it carries the collective memories of an entire city. “Ukrop’s was Richmond, and Richmond was Ukrop’s,” Voelkel said. When asked about the specific card and the person who owned it, Voelkel demurred. “It’s less about who owned it than it is recognizable and iconic for those with that shared experience” of owning one. “It was a very shared and common experience that everybody could relate to.”

The exhibit A History of Richmond 50 Objects is at the Valentine Richmond History Center and ends on October 20th.

The Valentine Richmond History Center has selected items from a span of over 200 years to be displayed in the forthcoming exhibit, “A History of Richmond in 50 Objects,”.

“Working on a collection as broad as the Valentine collection appealed to me as an interest and a challenge,” said David Voelkel, the Valentine’s general collections curator, who began selecting items from the museum’s cache late last year. “It was a really interesting project.”

Items featured in the exhibit

The exhibit is inspired by a joint BBC Radio 4 and British Museum 2010 exhibit, “A History of the World in 100 Objects”, that highlighted global artifacts. Voelkel, who earned a Masters at the University of Leicester in England and who once worked at the The Building of Bath Museum, said the British exhibit “revolutionized people’s thoughts about object-based history.”

Shortly after he arrived at the Valentine in August last year, he “began mining the collection” –approximately 1.7 million unique artifacts–to create an exhibit that would serve as a “homage to the British project.”

Among the objects Voelkel selected, and the oldest item in the exhibit, is an 1819 imprint of a Virginia map originally drawn by John Smith. Another object is an 1857 portrait of Aunt Betsy, an enslaved servant belonging to Williams Carter Wickham, grandson to the original owner of the 1812 E. Clay Street mansion wherein the Valentine now resides.

“Richmond is a history-based city,” Voelkel said. “It’s a city where history has been very politicized.” While much of that politicized history derives from slavery and the Civil War, it’s also alive in modern times. 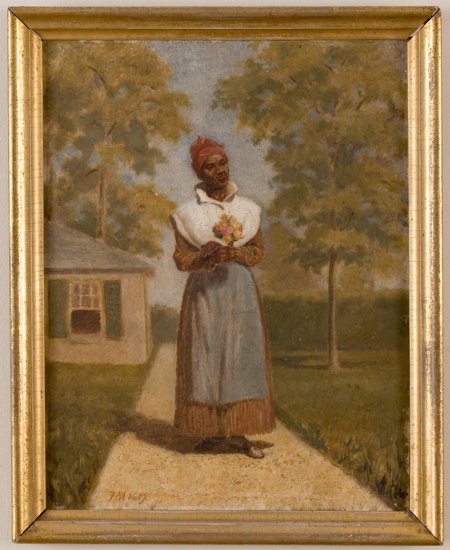 The most contemporary object in the exhibit is the rainbow flag flown by the Federal Reserve Bank of Richmond in 2011, an act that spurred national outcries of both support and condemnation.

While history museums are “object-based” in the sense that they preserve and display artifacts, Voelkel said he wants exhibit goers to “really think about the importance of objects and how [they] end up in collections.”

For that reason, the exhibit gallery has been reduced to a basic white decor (“It looks more like a modern art museum space,” Voelkel said) so that little detracts from the items. Objects have no accompanying graphics, no “bells and whistles,” Voelkel said–just a simple explanatory label. “This [exhibit] is truly about the object.”

For many objects, it will be the first time they’ve had an audience. “Many of these things are being seen for the first time since being donated” to the museum, Voelkel said. “It’s an exciting process to put [them] out.”

Above image of Gabriel Prosser, who led a 1800 slave rebellion in Richmond, for which he was later hanged. The image is featured in the exhibit.