Southbound to open on Tuesday, menu and reservations now online

I’m looking forward to seeing what they have to offer. Southbound has launched their website and now you can check out their menus and make reservations. 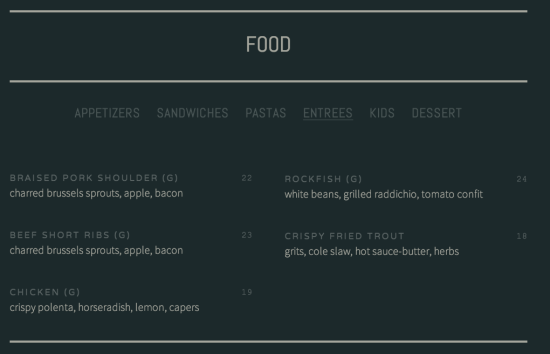 Judging by our failed attempt to get lunch on Saturday at Galley, southsiders are tripping over themselves for new dining options.

The options increase by one next Tuesday, November 25th at 5:00 PM as Chefs Lee Gregory of The Roosevelt and Joe Sparatta of Heritage open Southbound (3036 Stony Point Dr.) in Bon Air. The location will only be open for dinner at the beginning and eventually offer brunch next year.

Credit to Karri Peifer of Richmond.com for alerting me to the opening date and providing a peek at the menu.

From an earlier article on RVANews by Stephanie Ganz.

Speaking of Lee Gregory, much like the Perk! crew, southsiders Lee Gregory and Joe Sparatta were tired of having to cross a bridge for good food, and they knew they weren’t alone. “Lee’s lived out here for a couple more years than I have,” explains Sparatta. “And once we really started being friends, he kept ringing in my ear, like, ‘You should open in Southside one day…’”