Richmond’s own Whole Foods is all set to open the chain’s first on-site community garden this Saturday. Called “a dream come true” for Whole Foods Market,” this garden will not only provide produce to be sold in-store — it also aims to be a place where residents can learn about the importance of eating locally.

“The Village Garden” took about six months to complete and will supply fresh and seasonal produce to be sold in-store and incorporated into prepared dishes and salad bar options, according to Whole Foods Market Team Leader, Joey Herndon. 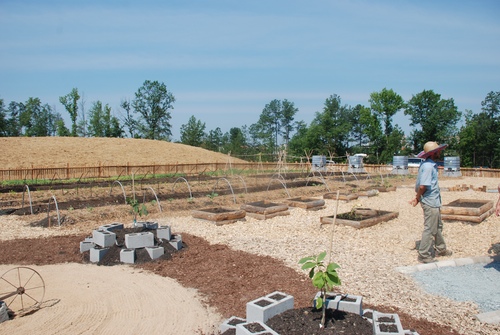 “This is really a dream come true for Whole Foods Market — to have a community garden of this size and scope right here in our own back yard,” Herndon said. “Many of our stores have helped fund and build gardens in their communities, but our Short Pump store is proud to have the first on-site community garden of any Whole Foods Market in the country.” 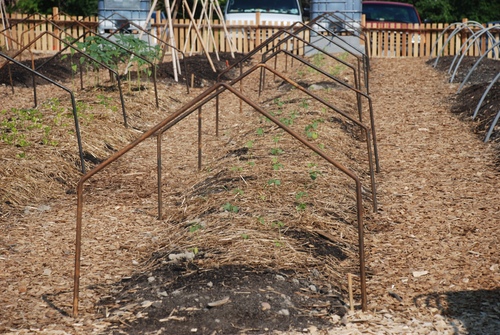 The one acre space will offer classes and workshops on a weekly basis to teach local residents and school children about eating locally, all-natural growing practices, and living a healthier lifestyle, Herdon said. Area residents will also be able to rent plots for personal use, and a portion of the food grown in the garden will be donated to the Central Virginia Foodbank.

The garden was designed and built to be environmentally-friendly, featuring a structure and display items that were developed using existing resources, such as reclaimed wood and roof shingles made out of coffee cans.

Herdon said the garden will also feature a 21-foot long Community Table for workshops and classes paid for by San-J, a premium Japanese sauce company that will also be providing 50 educational hours for area school children and residents.

There are plans for the garden to be expanded from one acre to six acres with the help of Whole Food’s partners, Markel-Eagle Partners, LLC, which invests in and manages the West Broad Village shopping center where Whole Foods is located.

“We wanted (West Broad Village) to express a certain quality of life — both outdoors and active,” said Markel-Eagle Partners President, Stan Manoogian. “So when this conversation started about building a village garden that was an extension of that sort of lifestyle and the Whole Foods ethos, we immediately jumped on the opportunity.” 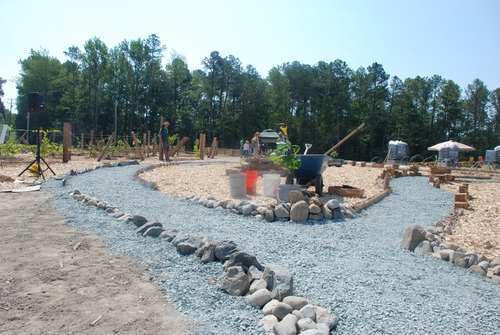 The plans to expand the garden include an extensive trail system, which will lead from the garden to a wetlands area nearby, according to Manoogian.

“We’re going to make (the wetlands area) into sort of a living laboratory for school kids to understand the importance of wetlands,” Manoogian said. “So many places will take a wetlands area and just sort of seal it off.”

Manoogian said Markel-Eagle Partners provided the land, well, and electricity to operate the garden. However, Whole Foods signed a contract with Backyard Farmer (a company that designs, builds, and maintains organic fruits and vegetable gardens, and provides educational programming to teach people how to grow their own food) to help run and operate the garden.

Sean Sheppard, who founded Backyard Farmers in 2007, said he and other company members worked with Whole Foods store team members over the past few weeks to build the garden, planting seven production beds, a fruit orchard, grape vines, and berry bushes including blueberry, blackberry, and raspberry.

According to the Whole Foods public relations team, the garden will offer produce year-round, including squash, tomatoes, peppers, and melons. The garden will also include fruit trees like hardy kiwi, fig, persimmon, pear, and plum.

Mark “Coach” Smallwood, green mission specialist and local forager for the Whole Foods Market Mid-Atlantic Region, traveled the region for new, local produce for Whole Foods to sell. Smallwood ensures the 38 stores and four facilities across six states and in Washington D.C. are recycling, composting, and donating as much as possible.

“This is part of a much larger initiative we have going on throughout the region,” Smallwood said. “We’re developing a new non-profit foundation called “Whole Grown,” and the purpose of “Whole Grown” is to make sure that we bring back this piece of our culture that we’ve lost.”

Smallwood said that people don’t know how to grow their own food anymore, and reviving knowledge is an objective for the garden’s founders and maintenance team. 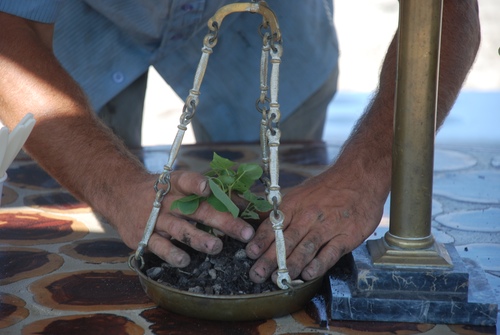 For more information about the Whole Foods Market Village Garden, visit the company website or call 804-364-405.

In advance of the opening, several events will be held to get the community excited and involved from a Farmers Market on June 24, featuring local vendors and live music, to a complimentary Film Screening of the movie FRESH on June 25, exposing today’s unresolved health and environmental issues.