There’s a major winter storm impacting a large swath of the country, rain and warmer temperatures are (temporarily) on the way for Richmond, and I want your Groundhog Day predictions!

Let’s start this morning by taking a look at the national picture. No doubt you’ve heard about the significant winter storm impacting the middle portion of the nation. Currently, there are blizzard warnings active for parts of 8 different states (in red below) from Oklahoma to Michigan, and winter storm warnings (pink) active from New Mexico to New England. In fact, we’re one county in southern New Mexico away from being able to draw a line of continuous winter storm warnings from the Mexico/New Mexico border to the Maine/New Brunswick border. 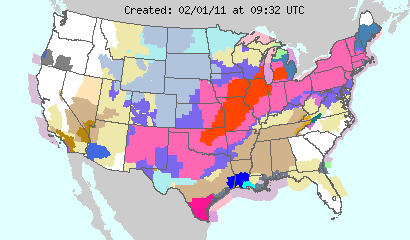 There have been intense radar returns indicating areas heavy snow in both Indiana and Oklahoma overnight. The area in and around Norman, Oklahoma – otherwise known as the center of everything weather in the United States – experienced a strong thunderstorm that included both hail and sleet falling at the same time. I’ve heard of thundersnow before, but not thundersleet! This is going to be a system that will have a major impact on a large portion of the population.

Thankfully, we’re going to escape most of it in Richmond. Some light precipitation fell overnight, mostly in the form of freezing drizzle, leaving a light glaze on cold surfaces like cars and bridges and elevated roadways. Give yourself a little extra time to get dig out the car and get to work this morning. Temperatures Tuesday will climb above freezing through the morning, removing most of the icing threat as the day goes on. Highs will reach the mid 40s today underneath a thick layer of clouds. These clouds will stick around all day, keeping tonight’s low temperatures relatively warm, only dropping to near 40 overnight. Rain will develop overnight as well, with showers becoming heavy at times, and maybe even a rumble of thunder or two, all thanks to the low pressure system that’s bringing this historic winter storm to the middle of the country.

A warm front will pass through our area Wednesday morning, sending temperatures soaring (at least by early February standards), climbing into the mid 60s in the afternoon. Rain will continue through the morning hours, finally tapering off before noon, though again there will be a chance for a quick bit of thunder during the morning. The unseasonable warmth will be short-lived, as a cold front will quickly follow the warm front, clearing out both the rain and the clouds, and allowing lows Wednesday night to fall back to near 30. Rainfall totals should fall between one quarter and one half inch for most of the area, with locally higher amounts.

High pressure is back in place for Thursday, and the seasonable temperatures are back with it. Highs will reach the mid 40s under partly sunny skies, falling to the mid 20s overnight.

Current model guidance is suggesting another system will be impacting the area from Friday evening into Saturday. Temperatures are looking like they may be cold enough to support a little bit of snow or a wintry mix bookending this system. As usual when Richmond is straddling that rain/snow line, it’s a bit too soon to say exactly what we’ll see in terms of precipitation types or amounts, but I wouldn’t expect anything significant out of this system. What we’ll likely see instead is a bit of a nuisance system, dropping just enough frozen precipitation to hassle everyone’s weekend plans. I’ll have an update Friday morning.