Ellwoods’ Cheesemonger of seven years is one of 253 Certified Cheese Professionals™ in the country and cultures relationships with Virginia’s cheesemakers. Imagine you’re on a mission: It’s 5:30 PM on Friday, and you need to pick a cheese to bring to a dinner party without panicking and assaulting fellow shoppers. You’ve been working for the past million hours, and you haven’t eaten anything…maybe ever. You find yourself wandering around the aptly named “Indulge” department at Ellwood Thompson’s, a deer in rosé headlights. Beer, chocolate, and, oh my god, pickles. Why did you come in here? Was it for the pickles?!

A calm voice breaks through your inner monologue. “Can I help you find something?” And suddenly, you realize everything’s going to be alright, because the cheese gods have bestowed on you a gift: Certified Cheese Professional™ Dany Schutte.

“I need cheese,” you blurt.

“OK, what kind of meal is being served? Is the cheese for before or after the meal?” You and Dany carry on this way, a quick game of 20 questions, and a few minutes later, you’re walking toward the check-out with a washed-rind goat cheese that compliments a wide range of cuisines and impresses everyone in its path. You’ve even got a perfect bottle of wine to go with it. You win.

That’s because Dany Schutte is good at what she does, and she’s got the papers to prove it. Ellwoods’ Cheesemonger of seven years is one of 253 Certified Cheese Professionals™ in the country, and only seven in the state. Last year, the second year of the exam’s history with the American Cheese Society, 200 people took the test, a three-hour, 150-question humdinger, covering everything from proper handling and sales techniques to the microbiology of milk.

Dany had a solid knowledge base when she started studying, but says her intense six months of preparation for the exam provided an education that directly benefits her customers today. She has the knowledge to share that, if a customer is lactose intolerant for example, cheese from goat’s and sheep’s milk might not be off limits due to different lactose structures. “[Knowing] how different milk from different animals is unique is an important part of my job, especially here at Ellwoods, since people come here for dietary needs. I have to be able to discuss that with customers and guide them toward what they need,” Dany says. 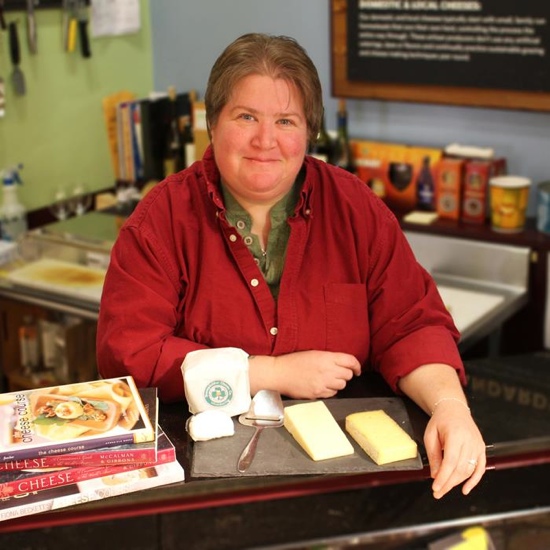 Dany’s career in cheese spans from early days at Central Market in Austin to Whole Foods in San Francisco, where Dany met mentor Deborah Dickerson, who made sure Dany went to all the “cheese events,” met the right people, and asked the right questions. When she landed back in her hometown of Richmond, Dany had a well-honed cheese palate, and Ellwood Thompson’s quickly made her a part of their team.

There’s only so much shelf space in the Indulge department, and you can see Dany’s hand in each selection–from the abundant goat cheeses she loves to the proudly-displayed varieties made within 100 miles of the store, each wearing a neon green “LOCAL” sticker. Dany muses, “a cheese selection in a store, whether it’s a cheese shop or a grocery store, will always be a collaborative effort between the customer base and the buyer. Being in an independant shop, I have more control over it than would be [the case] in a corporate environment. So, yes, my own personal taste certainly does reflect in the selection.”

Dany is an advocate for local producers and hints at the possibility of a coalition forming among them, as well as buyers and mongers from across the state. She says the community has a lot of potential, thanks to some well-respected producers: “You can’t talk about local cheese without mentioning, first and foremost, Meadow Creek Dairy. They’re our stars.” She corrects herself, “They’re our superstars. They have reached a very mature level of product and consistency, and they just knock it out of the field.” Secco Wine Bar’s cheese buyer Nicole Lang reflects on how the climate in VA contributes to the quality of the product: “Diverse grasses and flora mean high quality milk, and that means fantastic, complex cheeses. We try to have Virginia cheeses on our menu throughout the year as much as we can.” She lovingly describes Meadow Creek’s Appalachian, a staff favorite, as being “bright and citrusy when young and then…’dirtier’–more earthy and mushroomy as it ages.”

Dany has a direct relationship with the Feete family who own and operate Meadow Creek Dairy in Galax, VA, where they’ve been making award-winning cheeses for the past 16 years. Kat Feete, cellar manager and daughter of Meadow Creek’s owners Rick and Helen, has grown up watching Virginia cheese production and consumption evolve: “We began making cheese right before the artisan cheese movement really took off, so we’ve been in a great position to watch as the American consumer grew into a taste for European-style and specialty cheeses.” Dany continues to push the level of consumer education with her ongoing classes, which have covered topics like ‘Summertime Beer and Cheese’ and ‘Goat Cheeses and Their Diversity.’

“We are a young cheese culture,”1 says Caromont Farm’s Gail Hobbs-Page. “We are learning. We’re a young industry, really just since the 70’s when Ricki Caroll did New England Cheesemaking, and people thought, “Oh, I can do this at home!” Like the Feetes, Gail has watched the appreciation for cheese develop in Virginia, and her product has developed along with it. Dany notes, “Gail is continuing to grow in her craft and make changes in her product. Esmontonian, last year, won a ribbon at the ACS competition.”

On the morning I speak to Gail, she’s been working on a new cheese, which she half-jokingly calls “Green Mountain Breakdown,” in reference to the accidental way the cheese was created. One of Caromont’s cheesemakers used the wrong type of milk to make a certain cheese, and instead of scrapping the batch, Gail suggested, “Let’s not throw it away. Lets just see where it goes.” The surface-ripened cheese blooms around a layer of herbs and will, theoretically, be an herbacious, creamy counterpoint to tomatoes and peppers when it’s released this summer.

Dany and Gail have had an ongoing dialogue over the past few years, which has contributed to the evolution of Caromont’s product line and lead to a firm sense of trust between the two. Gail expresses her respect for Dany’s specialized knowledge, saying, “There’s so much in mongering that people don’t understand–how to care for cheeses…I won’t sell to people who won’t take care of my cheeses…It’s so much work, and to see it not cared for makes me so mad, I can hardly stand it. That’s why I sell to Dany, I know she’s going to take care of it.”

Sullivan’s Pond Farm’s Rona Myers Sullivan shows the same faith in Dany when she entrusts the cheesemonger with her painstakingly-made, hand-wrapped Bonnyclabber Cheese Co. goat cheese. The Sullivan family has been making cheese locally for 15 years. In 2003, they created VA’s first Grade A, self-contained micro-dairy building, from which they use “folk skills” and sustainable practices to produce exceptional small-batch cheeses. Where another retailer might see Bonnyclabber as a challenge to sell, Dany’s appreciation of the science and skill used to achieve the farm’s unique final product means the opposite: “We love Sullivan’s Pond. Rona is producing a unique style of cheese that is not found in many places because she doesn’t use a rennet…but instead uses an old celtic process called bonnyclabbering.”

Cheesemaker Cole Sullivan explains the bonnyclabbering process in more detail: “Clabbering is a term synonymous to curdling but it strictly applies to raw milk. The ‘bonny’ or ‘good’ clabber is the curd, in this case, resulting from fermentation of the lactose (sugar) in raw milk. In other words, the milk transforms itself as the natural enzymes/bacteria break down the sugar, causing everything to separate into curds and whey. For this process, both rennet and foreign cultures (added for flavor to most cheese) are unnecessary because we haven’t killed the healthy bacteria with pasteurization. It’s amazing to me that the modern food system has seemingly neglected this method for more than a century.”

The direct line of communication between Dany and the Sullivan family has lead to in-store samplings of Bonnyclabber goat cheese, which have educated customers about these methods, driving up demand for cheeses like the Lachevriere Cendre, which blooms around a layer rosemary-stem ash and improves with age. “I am pleased to say that, after ten years, I’ve experienced a huge upward trend in the consumer’s interest pertaining to local and organic methods of food production,” says Cole. “I have wonderful discussions with people all the time about the importance of local food and community-oriented social structure…Many folks are now researching nutrition and finding that raw milk and cheese tends to provide more health benefits than industry standard, ultra-pasteurized, and homogenized products. People want to know the truth about their food, and we couldn’t be more thankful.”