A VCU doctor wants to study two approaches to dealing with Parkinson’s and related issues, and the Michael J. Fox Foundation is kicking in money to make it happen.

The Michael J. Fox Foundation for Parkinson’s Research has given VCU’s Sara K. Lageman, Ph.D. a three-year grant totaling more than $107,000. Lageman, a clinician-investigator with VCU’s Parkinson’s and Movement Disorders Center and a professor of neurology, will use the grant to support her research project on Parkinson’s disease and mild cognitive impairment (MCI). 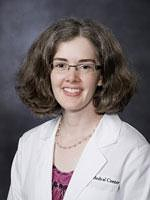 Lageman’s project will investigate two different approaches that each target patients with neurocognitive symptoms such as thinking difficulties and mood changes. These are typical attributes of Parkinson’s disease and MCI that typically result in a patient’s decreased independence and quality of life.

For one group of individuals, participants will be randomly given problem-solving cognitive training for eight weekly sessions. The problem-solving technique provides five steps to break down a problem into manageable components. To help with memory, patients will maintain a calendar, to-do list, and other organizational methods.

“The problem-solving technique is completely patient-driven. The system remains the same, but patients work on their own chosen goals. They tell us what problems they would like to focus on during the sessions,” Lageman said. “During the pilot study, we had one person who loved to read the newspaper from front to back every morning, but due to MCI, he was unable to maintain his focus on reading the entire paper. He eventually dropped this activity and simply stopped reading the paper. The training helped him by breaking down his problem and thinking of new solutions so he could still enjoy this pastime. For example, picking the best time to read, limiting the period of reading time and picking his favorite parts of the paper to read.”

The other study participants will undergo supportive therapy for eight weekly sessions. This therapy is also patient-driven, but more conversion oriented than the other, allowing for patients to discuss and reflect upon health and memory issues.

Lageman and assistants will monitor and compare both forms of therapy on a participant’s thinking abilities, physical health, mood, and quality of life. Results will help determine how effective these therapies are for patients with Parkinson’s and MCI.