There’s something about Dairy: A look at one of RVA’s oldest restaurants

A Scott’s Addition gem that’s serving up nationally recognized food and a side of RVA kindness. Bill Webb worried he would fall into the Grand Canyon while chatting on the phone with Southern Living‘s Editor-in-Chief in late 2009.

“I had to take a step back, I didn’t want to fall in the hole,” Webb said, recalling the conversation he had while vacationing with his family in Nevada. The editor informed Webb that his family-run restaurant, The Dairy Bar, was going to be named one of the 5 Best Breakfasts in Virginia, and the best one in Richmond, in Southern Living‘s March 2010 issue.

Incognito reviewers were, weeks before, won over by the Buy the Farm plate (three eggs, bacon, sausage, ham, and silver dollar pancakes) and The Eggstravaganza Omlette (bacon, ham, sausage, grilled tomato, and cheese).

“We had a line out the door for about a month,” Webb said after the issue came out. “We couldn’t keep up. It was overwhelming.” Even out-of-towners were exiting off I-95 during their travels just to eat there. The national press led to the restaurant’s best quarter ever.

The Dairy Bar could easily hang its hat on the national recognition. But it’s not what the Webbs, or the restaurant, pride themselves on. Virtually all restaurateurs claim that their place makes diners feel welcomed or at home. Few actually achieve it like The Dairy Bar.

And if Richmond prides itself on being a city of history, one of the unmapped historical markers is located on an inconspicuous block of Scott’s Addition. It’s where one of the nicest families lead some of the nicest workers in producing some of the city’s best food. All with a little help from Webster the cow.

The restaurant dates to 1946, when Curles Neck Farm opened a plant to process its dairy and produce ice cream. While Scott’s Addition is now replete with industrial businesses and buildings, the area was still underused at that time.

“I believe this is probably the first building, if not the second building, in this whole general area called Scott’s Addition,” Webb said.1 Attached to the Curles Neck plant was a public restaurant that also “served as the place for workers at the plant to come down for lunch,” Webb said.

Bill Webb met his wife, Patricia (customers know her simply as Trish), in Houston when he was 19 and she about 20.2 Both worked at Jack in the Box, a company Bill started at on the East Coast making tacos at $1.95 an hour.

At 18, Webb transferred to Houston where he managed his own Jack in the Box restaurant. At about age 22, now in Dallas, he was promoted to district manager, in charge of 10 restaurants, and the youngest district manager at the company. In the late 1980s, Patricia gave birth to their second son, and Bill started working at Wendy’s supervising 12 restaurants for about six years.

With Webb’s managerial experience, you’d think that he knew every in-and-out of having a successful restaurant. But it was when the family moved to Richmond, and Bill began working at Aunt Sarah’s Pancake House, that he learned more.

“It was my first opportunity to work with a family-run business,” he said. One of the many benefits is that, if you have an idea you want to implement, you didn’t have to “go through the hoops” of upper management. “You can make it happen in 24 hours.”

Some time later, when Patricia was working at Circuit City, the Webbs decided it was time to “do something for ourselves,” Bill said. They began looking for their own restaurant. In 1997, they found Curles Neck Place for sale. 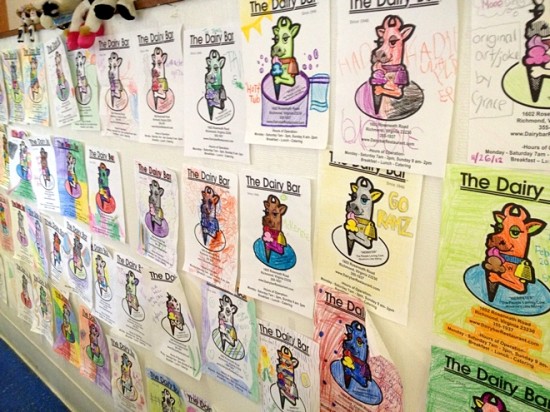 “It was a great opportunity for us, at the time back in ’97 when we looked at it, to take a restaurant that had an established base that needed some focus and some TLC, and build the foundation,” Webb said.

While it became their restaurant, they still wanted to preserve the history that came before them. On the wall, they’ve immortalized Woodrow the “people-loving cow,” the mascot of Curles Neck Farm from 1946-1986. Woodrow has since retired, but in 1997 he handed over “people-loving” duties to his cousin, Webster, when the Webbs took over. Colored drawings of Webster by The Dairy Bar’s youngest patrons cover several walls of the restaurant, showing just how much people love the current people-loving cow.

When the Webbs took over the restaurant, they didn’t drastically remodel or overhaul. Most of the changes were behind-the-scenes, barely noticed by customers. The reason? Webb preaches gradual changes, ones that don’t bowl over customers with surprise, but gradually add and hone. Take, for instance, the menu.

“That menu was developed over the course of the last 10, 12 years,” Webb said. He estimates the menu has four-times as many items as it did when they took over in 1997. The same goes for their milkshakes. Webb estimates that there were no more than five flavor options 16 years ago. There are now 22.

One of the takeaways from his experience in fast food was to make food consistent and quick. The chicken salad sandwich you had yesterday should be the same one you had ten years ago, he said. Not only that, but you should walk in, order, eat, pay, and be on your way in 30 minutes. Whether for breakfast or lunch.

Another thing that’s made The Dairy Bar thrive over the years is the premium placed on customer interaction. “We position ourselves as a family diner,” Webb said. He and the waitstaff don’t talk at their customers, but with them. They know the names of their regulars, as well as the names of their family members (“And if we don’t know you, we’ll get to know you,” Webb said).

When children aren’t coloring in pictures of Webster, they’re sometimes behind the bar scooping their own ice-cream, or in the kitchen eyeing the milkshake maker.

“That’s who we are,” Webb said. The Dairy Bar really is family-friendly. Other restaurants, comparatively, are just family-tolerant. “I encourage you to come in on any given day, and you’ll see it in action,” he said with confidence.

The most enjoyable part of operating the business, he said, is seeing children and families grow. Some family elders even remember when the restaurant was owned by Curles Neck farm. “We have three-to-four generations of the same family visiting with us, and that’s pretty neat to see.”

Having been in the restaurant business for 30 years, Webb said that he and his family have no intentions of selling The Dairy Bar anytime soon. For 16 years, the Webbs have helped make the restaurant a historical landmark in its own right; not just for its age, but for the food and its embrace of Richmonders.

“As long as we own it that’s who we are and what we want to do,” Webb said. “We want Webster to be here for a long time.”

The Dairy Bar is located at 1602 Roseneath Road.