The ngonis of Richmond: Bassekou Kouyate and an ancient instrument will journey from Africa to play the Folk Festival

The 2011 Richmond Folk Festival is only two weeks away. There is so such musical and individual ecclecticism, and amazing stories…but few are more remarkable than that of Malian musician Basskeou Kouyate, who will be performing at the Folk Festival later this week.

It is foreign and strange to you and me. But to Bassekou Kouyate, the ngoni is very much an attachment, an appendage, a proverbial extension of both himself and his creativity. A string instrument that was first developed and played in West Africa (and thought by many to be the forebearer of the banjo), the hollow canoe-shaped instrument with stretched animal skin is classified by musicologists as an “internal spike lute,” and dates back to the 13th century. To Bassekou, however, the ngoni was a part of life.

Born and raised in the African country of Mali, Bassekou, 45, cannot recall when he first played the common African instrument “because there were instruments lying around the house of my griot family for all the young boys to play with, and we used to pick them up for a short while, make a few notes then put them down and move on to playing football or minding the animals.” 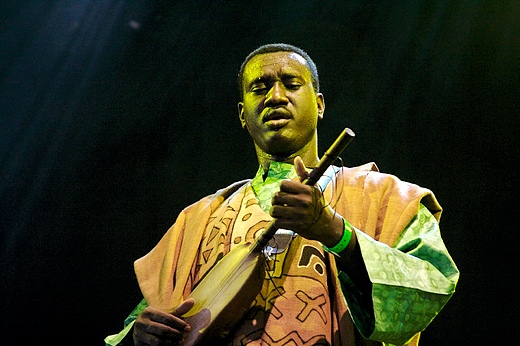 At the age of 8, Bassekou’s father began teaching his son the family trade, that of a griot. Griots are musical storytellers who rely on poetry, instruments, and singing to both retain and recite oral tradition. The training imparted by Bassekou’s father was vital because, as Bassekou says, “there was no school in or even near our village, this was the most formal instruction we received apart from learning the Koran.”

Music is the foundation on which most of Bassekou’s knowledge was based. “Because I was a griot, it was considered natural that I would be interested in music because that is what men in the family did: playing the ngoni…” It wasn’t until the 1980’s that Bassekou would forever change the norms of the ngoni, as well as its cultural reach.

Historically, as Bassekou says, the ngoni musician “played the role of relating to just one person: the man in power, who naturally sat on a large stool or chair.  He was the one on display, not the musician who remained sitting on the floor even if he used his skill to influence his patron.” A simple act changed this dynamic.

He put a strap on a ngoni and began playing upright. “When I used a guitar strap to hold my ngoni,” says Bassekou, it enabled him to “stand up and engage directly with my audience.” Such a simple and alteration to the instrument and playing stance may seem like an innocuous, unremarkable development to most of us, but it was startling to many in West Africa. “Once people got over their surprise and, yes, shock because this was the opposite to what they had been brought up to expect, the older griots began to say they thought I was right to find a way to draw attention to our skills.”

As attention about Bassekou grew, he found himself in, to him, very foreign environments with other very remarkable musicians.

“I first came to the US twenty years ago and arrived on my own without a word of English and finally got down to Tennessee where I went to a banjo convention and was pushed on stage to join an American who was playing something that sounded familiar, so I joined in.  At the end he said “OK, so you know the blues”, but I said, “No: you’re playing my Bambara music from Mali!” He was Taj Mahal and it was the first time I ever heard the blues.” 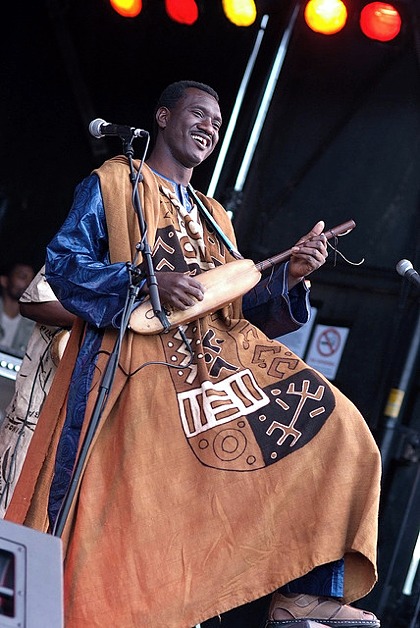 It wasn’t until 2007 that his first album, Segu Blue, was released internationally. It went on to win that years’ BBC World Music Album of the Year award. When asked how Westerners typically respond to his live performances, he says: “It’s interesting, at first they do not react much, but then the music gets to them. Almost all of our music is for dancing, and we generally find that even the older people in the audience will end up getting up to dance, and that is what we really like our audiences to do: to enjoy themselves.”

Bassekou and his band, Ngoni ba, will perform at the upcoming Richmond Folk Festival. “I’m looking forward to influencing more people who’ve never heard our music,” says Bassekou, “and to seeing everyone end up getting up to dance.”