The never-ending year of the witch: A four-year-old’s Halloween tale

In a sweet tale about Halloween, costume choices, and childhood fears, a local dad tells us about his son’s utter detest for witches, as evidenced by an uncontrollable desire to punch them in the face.

“When I grow up, I’m going to be Robin,” Jackson said. “For Halloween, I’m being Batman.” To a four-year-old, for whatever reason, this illogical career regression makes perfect sense. Surely he knows not what he says, I thought.

The Dark Knight is, of course, an inspired choice. At the end of the long day — Halloween or any other day — undoing evil is an honest trade and an aspiring vocational trajectory. Robin, however, though a highly revered sidekick among comic book aficionados, performs his job (lest we get too carried away) while wearing green briefs and no pants. The Boy Wonder hails from a family of acrobats, but is this any sustainable way to pull a 9 to 5? Besides, two words: Chris O’Donnell. I rest my case.

“Robin?” I asked Jackson, and I may or may not have followed that up with “Really?” Perhaps, at four, All Hallow’s Eve is a bigger deal than growing up. But as we all know by now, there are fears that come standard with both.

Last year, in the interminable run-up to Halloween, my wife and I watched our Jackson go back and forth (and back and forth) on his possible identities for the big day. He vacillated on the decision like how I picture Lady Gaga tortures herself every morning as she steps into her vast closet of personalities. For the better part of a lunar cycle, he was going to be a firefighter, now a wild animal, then Lightning McQueen, now Bolt (the animated super-dog) and then that ultra-cool, red-faced Sith lord with the double light-saber: Darth Maul.

Eventually he decided to fight fires — versus, say, searching for interplanetary Jedi to eradicate — up and down the streets of our Bellevue neighborhood on Richmond’s North Side. His parents were damn proud — a choice squarely in the tradition of working-class realism.

This Halloween, on the other hand, Jackson –- an older, wiser Pre-K student –- is apparently more decisive about his preferred identity (i.e. “I’m Batman.”). Although how this newly discovered decisiveness relates to his exasperating inability to choose a flavor of Popsicle in under 15 minutes, we’re still not sure.

What we absolutely do know is that our son will not be donning a pointy black hat or pretend-riding a broomstick up and down the sidewalk anytime soon. And you can forget about the good, clean fun that is whipping up potions and casting spells on people. Under no circumstances will Jackson be showing up on our neighbors’ doorsteps as a witch. Guardians of morality everywhere are beaming with delight.

But this zeal to have nothing to do with witches is not his parents’ doing. We promise. It is not because we irrationally fear that a witch’s vestments and concoctions will plunge our four-year-old into pagan ideologies or occult underworlds. It’s simply because Jackson is not at all down with witches. In fact, he rather hates them –- all the way down to their very suspicious toes.

Exhibit A: Throughout the calendar year –- and I suppose this applies to Christmas in spite of its predisposition toward the spirit of giving –- he maintains a staunch I-refuse-to-look-inside-my-closet rule. It’s personal, and it’s policy. Especially during this high season for witches, he believes there really is a good chance that a witch is hiding out in there, waiting for him. Waiting to do God knows what? Infuse a little boy into a delicious stew? (Somewhere Jackson is not laughing.)

Exhibit B: Last Halloween, we purchased an excessively kid-friendly (non-edible, mind you) witch-on-a-stick, the kind that shows off its social acceptance with its one perfectly-painted goofy white tooth. This lady would make most anyone else smile. After firmly planting the witch in our front yard, with the express purpose of diminishing the magnitude of this whole witch thing, we watched Jackson promptly seize the day. On more than one occasion he would tackle the witch and repeatedly punch her in the face — and with flourishes of unbridled glee.

Exhibit C: Earlier this year, upon his first extensive viewing of The Wizard of Oz, we watched as Jackson absolutely couldn’t get enough of the scene where Dorothy dumps water on the Wicked Witch of the West, melting her infernal nemesis. It’s an epic scene, I’ll grant you; everyone knows that witch had it coming. But the shimmer in our son’s eyes was only matched by the glistening of Dorothy’s red shoes.

So where is all this animosity and hostility coming from? Why the witch-y melodramatics from a boy whose relationship with the Scooby Doo cartoons is doing quite fine, thank you very much?

Well, it’s not exactly their fault, per se, but my wife and I have come to casually blame Lowe’s for Jackson’s inordinate hate-hate relationship with witches. Last year, in early September, on a random weekday, while he was already in the middle of his profound Halloween identity crisis, Jackson happened upon a very frightening sight indeed.

Not a Lowe’s employee, she was standing right around the corner from the topsoil and flower pots. She was mechanical but appeared human. She had red lights for eyes. The expensive faux skin on her face -– not to mention her exaggerated warts –- could probably startle the ugliest animal in a Transylvanian forest, in. She was much taller, of course, than your average three-year-old. And she made a very believable pot-stirring motion while speaking in an impressively hissing voice.

That was that. Ding-dong, the witch is dead. And she would never be invited into Jackson’s world –- for a play-date, or for Halloween -– ever. The Chinese have their Year of the Ox or Rabbit or Tiger. For Jackson, then and there, it had suddenly and irrevocably become the Year of the Witch.

And so, here we are again, and here we go again. Leaves are changing hues and finding their way to the ground; autumn rains (at least in Richmond) have arrived; treats are being purchased; tricks are being plotted; and Jackson’s gaze has re-fixed on the witch.

As no doubt he thinks the best defense is a good offense, our son has taken to being constantly on the hunt. While walking home from school among the Halloween decorations and lawn ornaments, while running around in the backyard with the alley close by, and especially while playing Legos beside the closet –- for him, they are all moments to be wary of the witch. Recently, in a minor incident, our witch-on-a-stick lost her nose. We found it lying beside her in the dirt. There is only one plausible explanation. 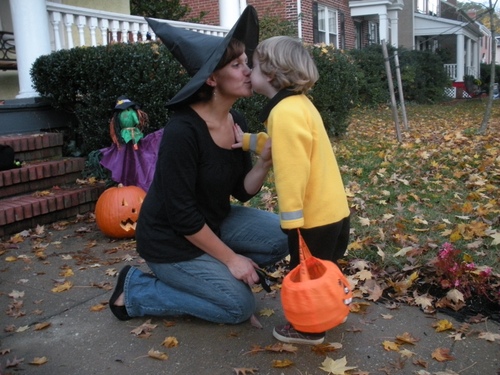 Jackson kissing the only witch he’ll ever love. That’s the much-abused yard witch in the background.

Fear is a tricky business; it is certainly one of the trickiest of human experiences. From where it comes, and why, and how often -– like Jackson’s witch phenomenon, it can sometimes seem a never-ending year. And who doesn’t want to tackle it every now and then and punch it repeatedly in the face, or pull off its nose for that matter?

But this year, our little man has chosen Batman. Although he may yet change his mind, I hope he doesn’t. I really hope he doesn’t. Facing and fighting off a few witches as the Caped Crusader just might contribute to whatever he wants to be when he grows up.

Nathan F. Elmore often writes at the intersections of culture, faith and spirituality. You can find his writing at nathanfelmore.com or follow him via Twitter at @elmorelian.