Owner Amy Cabaniss is very familiar with RVA restaurants. The former owner of Cabo’s Corner Bistro, and current Julep’s proprietress has just opened a new restaurant, Mint. No stranger to 100-hour weeks, she hopes her new space will give Richmond a southern, “new casual” taste. It’s 11am and I’m by myself at the bar waiting for Amy. I’m not nursing a drink or even looking to have one. Instead, I’m taking in my surroundings. The bar is a deep mahogany, almost crimson. Tables, chairs, and a newly installed banquet bench echo the dark wood of the bar. A young woman tugs on the large, solid white blinds, launching the fabric upwards and allowing in the afternoon sun. The walls are a soft white, except the western-most side of the room, which is a rather cheery shade of green…minty, you could even say.

I’m sitting inside Mint, the latest restaurant to open in the city’s upper Fan. Owner Amy Cabaniss will soon tell me that she searched four years to find this very spot where I’m currently sitting.

She’s just a little late in meeting me this afternoon. Owning two restaurants keeps her busy enough, but throw an eleven-year-old, a newborn, and a fiancé into the mix, and I’m impressed that she’s made it here at all.

She sits next to me at the refinished bar, each of us sipping water. The good things others told me about her prove to be quite true. She is very down-to-earth and not at all shy to curl a smile or laugh. The owner of the esteemed Julep’s in downtown, she tells me “I looked everywhere” searching those four years for Mint’s “home.”

Last July, she heard that the long-standing Fan staple Davis & Main was closing. A conversation began that month with owner Robert Nolan. In September 2011, Cabaniss and her fiancé, Jon Ayers closed on the property. Months later, after refurbishing, painting, installing, and doing all of the other things that it takes to open a new restaurant, Mint held their soft opening on March 13th. That week, Cabaniss worked a 100-hour week. She says that her babysitter billed her for seventy-five hours as Cabaniss and her fiancé put together the finishing touches on Mint. It seems that chaotic week was worth it: “It’s been great,” says Cabaniss, “Much busier than I expected.” 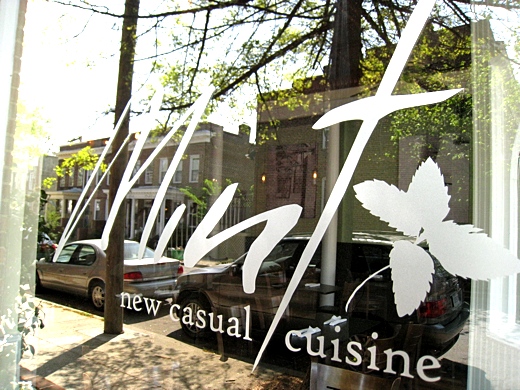 The dark wood decor and the copper-painted ceiling evoke a quaint, southern feel. However, the restaurant pairs that motif with a more modern, bright aesthetic. As a result, Mint is both casual and classic. The menu is not unlike the decor.

Cabaniss splays out Mint’s menu on the bar for us to read. She points to the Fried Dill pickle chips, the Pimento mac n’ cheese, and the Bacon-wrapped dates and pecans as some of her personal favorites, among many others (“I’m too busy working, I don’t get to try the food as often as I would like,” she tells me). She calls the menu “new casual.”

Designed by Julep’s chef, Randy Doetzer, and overseen by acting chef Travis Milton (formerly of Parkside Cafe), she tells me that food is “fresh and new,” while being inexpensive. The dressings are made from scratch, so are the hamburger buns, and food is locally-sourced from regional farmers. A key aspect of the menu that Cabaniss points out is that it was designed for sharing and sampling. “I like trying a lot of different things,” she says. The menu reflects many “starters and snacks” that are easily shared among tables. “It promotes sharing,” she says, something she remembers encountering when she visited her brother in Japan back in 1989. “I wanted something that could please a lot of different people.” She also plans to introduce a carryout “box” option for people who don’t have time for a sit-down lunch sometime in the future.

While chatting, Cabaniss tells me that she used to waitress at Davis & Main in the 1990s when she studied marketing at VCU. She says that if you had told her that she would one day own two restaurants, including one at the intersection of Davis and Main, she would have laughed at you. However, Cabaniss has become one of Richmond’s most notable restaurateurs. In 1998, she sold her first property, Cabo’s Corner Bistro, to Bacchus. She moved Cabo’s to the current location of the Republic, at 2053 W. Broad where it remained Cabo’s under new ownership until 2003. In May of that year, Julep’s opened at 1719 E. Franklin Street. Definitely not the life plan that she had while waitressing at Davis & Main and studing at VCU. That’s fine with her, though.

Despite the stresses that come with opening a new restaurant and learning to manage two restaurants simultaneously, Cabaniss seems genuinely content with life. A mother to a newborn, an eleven-year-old, and anticipating an October wedding to her fiancé and partner, Cabaniss feels very happy to be at this point in her life. “I feel like everything is going pretty well.”

Mint serves its full menu for lunch and dinner, Monday – Saturday, 11:30am – midnight. They now serve brunch on Saturdays and Sundays starting at 10:30am.